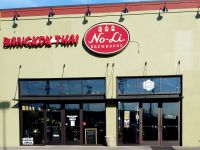 I have been back 3 or 4 more times and the service warrants a slight bump as they seem to have improved. Beer quality also appears to be on the upward trend. My last visit was in June 2013.

I would be remiss if I didn’t mention the really nice riverside beer garden. It is a gem.

Visited again on 8-22-06. The service was much improved, but I will wait until my next visit before raising the score. I had a great BBQ hamburger this time. The BBQ sauce is made with their own beer.

The Northern Lights is located in a large old building complex hard by the river and the Gonzaga campus. The complex also includes several other restaurants and businesses.

The actual bar seats about 20 with tables for another 80 or so. It seems that they seat large groups out in the common area of the building. They have several TVs, so it is a decent place to catch the game. It is also smoke free and they offer growlers to go.

I was there on a Tuesday at happy hour/dinner and I would say that they had 30 people in the bar area and another 40 or so at the tables in the common area. Most appeared to be locals and several came in for a beer and a growler to go. I had several nice conversations with the customers. I was impressed with how friendly everyone was.

They had 10 beers on tap and all were decent. The service was a bit slow but the bartender did a great job of describing the various beers.

The menu while having the pub staples, also offered some nice PNW specialties. I like the fish & chips I ordered.

Im sure I will return during my next visit to Spokane. Worth a stop!

this is an awesome spot they have here, part of a larger complex right on the river there that also houses a good looking distillery, a salon, perhaps a food spot or two, i didnt pay too much attention, and then the brewery through the back. the space is large, with a taproom on one side, lots of seating, some visible tanks and such, and a pub type atmosphere, with lots of windows and views to the outside. on the other side though, they have a world class outdoor area, with lots of tables, room for lawn games, and best of all, some adirondack type chairs looking out over the river. they have service out here too, and this is where i posted up with my beer. an awesome spot to watch the river flow by and relax, as good as it gets out here really, an amazing setting to have a beer or two. the beers i had here were just okay, which is sort of consistent with what i have had from them over the years outside of their brewery. here though i had an overly sweet peach pale or ipa type, and a somewhat generic pale ale called corner coast. not enough to get me real excited, but fine and drinkable at the same time. they had a nice selection, and perhaps i should have gotten a little more ambitious with my orders, but the beer was almost inconsequential the space was so mellow and beautiful. i really love the patio area! service was good, but they werent real busy when i was there, but i was made to feel at home. they have an awesome vibe here and are obviously an institution in spokane, one of the first and one of the largest from what i gather. the beer could have been more impressive, but that wont stop me from visiting again, this place is rad!

Place is open, but feels like a Chilies or Applebees in a mall. The food was alright, the servers were great. I liked that I could have lunch here with my family and have a flight of tasters, but overall the beers (even the barrel aged options) came up short.

Lunch at No-Li brewhouse on a Sunday
Facility is very good, sat on the outside patio overlooking Spokane River. Nicely shaded
Service was quick and attentive
Selection: very good selection of year round and rotating beers
Food was ok, not bad,
Value: A little bit pricey for the quality
Overall: Very good experience, nice stop when in the Spokane Coeur d’Alene area

Really enjoyed a visit for lunch. A great selection of very good pub fare. Excellent beers. Their location is right on the Spokane River, so I need to come back in warmer weather when the outdoor seating is available.

I visited the No-Li brewhouse a couple weeks ago on my way through Spokane for a couple of beers and some lunch. It's a good place, atmosphere-wise; kind of industrial-looking with brew equipment visible, but clean and relatively new looking. There's also an outside seating area, which would probably be quite nice when there's not a heat wave going on.

I sat at the bar and service was decent. There were 8 beers on tap when I visited, and I enjoyed the hoppy brown ale they had on offer. The beer is pretty good overall, although they blew the last keg of sour cherry ale right before I was able to order some -- not their fault, but I was disappointed.

The food was good. I had the reuben and clam chowder, and it met all my lunch expectations.

A stone's throw from Gonzaga University, in what seems like it could have been an old "open air" market building. The beer vibe was good, but almost felt a little forced. I had a flight of the Usual Suspects with the choice of Monkey, the beers were decent, but as the name suggests, "usual." I have a bottle of their imperial stout, which I'm excited to try. Despite the place being half empty, there were a lot of staff who seemed oddly rather busy. Did not try the food, but glancing at the menu, the options looked intriguing. As I was leaving i walked out back and saw they had some really nice outdoor seating right along the river.

Did a flight of beers late on a Friday night. Beers were good but not great except for one, a barrel aged stout which was excellent. Taproom was spacious and had a good vibe, servers were attentive. Didn't try any food. Will probably return if in the area with not that many choices in the area.