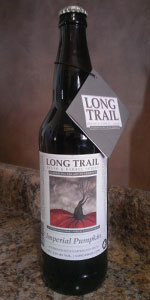 Description: Long Trail Imperial Pumpkin Ale is the first offering in Long Trail’s new Brush and Barrel Series. This limited release seasonal treat is small batch brewed with pumpkins, cinnamon, ginger, nutmeg, and cloves, with increased malts and a touch of bitterness for the perfect balance.

side note they should make six packs of this i dont know if this is experimental or what ever but cost to value aint there.

Smells like a Belgian: sweet and yeasty. Nutmeg, cinnamon, and the pumpkin comes in the back end. Good balance on the aroma.

Surprisingly complex. Sweet and spicy, with a pumpkin pie finish. Some resiny yeast. A bit of a dry gourd feel on the palate.

This leaves no doubt that it's a pumpkin ale, but it doesn't rely solely on a gimmicky flavor. It's very tasty, and a perfect complement for a cold New England Fall evening. I would consider drinking this regularly in season if it were available on tap. At ~$5.50 a bomber, it's also reasonably priced.

Nice artwork on the bottle, too.

Hazy tarnished orange color. Head less sticky then the smaller pumpkin ale by long trial. Much different nose as well. Faint pumpkin on the nose, some funky barnyard like scents. Soft pumpkin pie spices underneath it all. Some detectable alcohol.

Kind of bland actually for such a big pumpkin beer. On the bigger side of being medium bodied, bright effervescence. Sweet, malt is highly detectable with a bit of alcohol on the swallow. The pumpkin flavor is there but faint along with the spice, some spice on the finish though. Slightly sour and/or acidic on the back end of the tongue. Not very good.Kind of like they took their pumpkin ale, upped the malt without upping anything else. Drinkable but disappointing.

Compared to other pumpkins at this abv level, this one really crapped the bed.

This was poured into a snifter. The appearance was a ruddy dark brown color with a slim off white foamy coating of head rimming itself around the glass. Lacing coated the sides adequately. The smell started off with some pumpkin puree’, light allspice, and a little bit of ginger. The taste was moderately sweet carrying the spice into the balance. There’s a slight sticky aftertaste leading into a quick semi-sweet finish. On the palate, this one sat about a light to medium on the body with an okay sessionability about it. Carbonation seemed good for an Imperial Pumpkin ale and good for me. Overall, this is good. It hits all of the points for the style but somehow I had higher hopes for this one.

Pours a burnt orange with a finger of head that dissipates rather quickly. The nose has just a mild hint of pumpkin in it. The flavor is certainly full-bodied with some pumpkin and a touch of cinnamon. There is a touch of sweetness as well as a sourness that likely comes from the pumpkin itself. The finish is bitter, but not overly hoppy. There is some alcohol presence to this offering, but not enough to make it unpleasant. Big, good, but not great.

While home at Chez Woody in self-quarantine, I have been making a concerted effort to really clear out some of the backlog, especially the Bottle (!) Backlog. These last several have been bombers that were purchased & simply set aside in covered cardboard box. 8=( That is part of my downfall - bottled beers in cardboard boxes & CANs in cardboard 6-pack carriers: I can't see what I've got & so - out of sight, out of mind begins to apply.

From the Bottle (& the little hanging tag that came with it): "Brush & Barrel Series"; "Celebrating the Art of Vermont"; "Art by Jess Polanchek * Beer by Dave Hartmann"; "About the Beer: Imperial Pumpkin Ale is the first offering in our Brush & Barrel Series. This limited, seasonal release is a small batch treat brewed with pumpkins, cinnamon, ginger, nutmeg, and cloves, with ample malts and a touch of bitterness for the perfect balance."; "Bitterness Units: 30 IBUs"; "Malts: Two-Row, Wheat, Caramel 80L and Caramunich Malt"; "Hops: Nugget, Mt. Hood & Willamette"; "About the Series: Each brew is specially crafted by Long Trail's Brewmaster in small batches that reflect a variety of styles. Our brewers will be brewing the featured beer with the local artist who created the beautiful imagery for the packaging. Our hope is that artists and brewers will draw creative inspiration from one another and further push the boundaries of their respective art forms."; "About the Brewmaster: Dave Hartmann joined Long Trail in 1992 as a graduate of RPI's Environmental Engineering program. He returned to school at UC Davis in 1994 and achieved the Diploma-Brewmaster accreditation through London's Institute of Brewing and Distilling. After brewing across the US and in Germany, he returned to Long Trail in 2009. Having brewed an amazing variety of styles over a course of 20 years, Dave continues to find wonder in the magical combination of malt and hops and loves the challenges, noises and aromas of an active brewery."; "About the Artist: Jess Polanshek is an illustrator from Cambridge, Vermont, who draws most of her inspiration from the wooded hills of the Green Mountain State. Her work revolves around the forest and its inhabitants, often incorporating surreal or fantastical imagery. www.polanshek.com".

I Pop!ped the cap and, having noticed some lees on the kick/punt, started a slow, gentle C-Line pour into the awaiting glass. It foamed up beautifully to form two-plus fingers of dense, foamy, rocky, tawny head with excellent retention. Color was Coppery-Brown (SRM = > 17, < 22) with NE-quality clarity. Nose was REALLY spicy with cinnamon & cloves leading the way, followed by nutmeg & ginger! Mmm.

I know that Pumpkin Beers have gone out of vogue & perhaps they never achieved such status, but I always like them, for the most part. I still like to bake with my oven & I think that it hearkens back to when I saw myself as a baker, especially desserts, after high school.

This smelled like liquefied pumpkin pie! Mouthfeel was big, thick & full, like a dollop had been scooped into my mouth & onto my tongue! I just let it roll around, savoring all of the wonderful spiciness.

I have been drinking spiced Fall/holiday ales the past couple/few days & while it may seem counterintuitive in mid-to-late April, this has been a cool, chilly, windy Spring & these beers are not totally out of place. In the middle of Summer? I'd probably have set them back aside again.

I found this to be a really enjoyable drink throughout. The spiciness was warming on a chilly, windy morning with a pleasant admixture of spices. Finish was dry, thanks to the prevalence of spices in the brew. I would drink this again, but I am not sure that it is still in production. YMMV.

Overall a good pumpkin bomb. Definitely worth trying if you're into this style

Pours great - expecting or hoping for orange like the inside of a pumpkin but pours a deep amber and orange - doesn't disappoint, it's like the inside of a pumping but as expected with spices and brown sugar. Smell is pumpkin first with brown sugar and maple, then spices, and finally a bit boozy. The booziness almost disappears via the taste and reinforces heavy pumpkin and brown sugar. Spices are present but have had stronger in other similar brews. Well done.