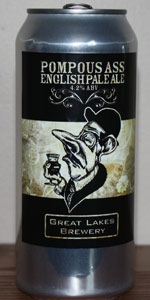 Amber -on the burnt orange side - with medium head and retention. Caramel and citrus flavour with a hint of malt. Aromas though are harder to detect. Light tasting and slightly bitter and carbonated. Not overly memorable but an enjoyable beer nonetheless!

Can: Poured a clear light brown color ale with a medium size foamy head with good retention and some lacing. Aroma of light dry cereal notes. Taste is also a mix between dry caramel malt notes with some light citrusy hops. Body is light with OK carbonation. Not bad but fall a bit short in terms of character.

Enjoyed on cask at The Rhino. Grapefruit colour, absolutely no head. Served at the correct room temperature. Medium mouthfeel, no carbonation which is fine. Some hops,though understated, and just a tad astringent. Decent taste and drinkability. No hop aromas.

On cask at Volo.

Far from pompous, I find this beer to have a quiet, unpretentious beauty. Its deep amber colour preserves the clarity of a golden ale but sheds the flashy highlighting; its toastiness imparts a dusky tone without making it tenebrous like a stout. Even its head is ethereal, the lacing dainty.

The bouquet resembles those plastic-wrapped creamy caramel squares and something like I imagine citrus bubblegum would smell like. Its fruitiness is breezy and its sweetness moderate, one seemingly tempered (but entirely untroubled) by the presence of the other.

The beer's maltiness is relatively gooey, with a faintly treacly, dark, plummy fruitiness and firm notes of hard toffee and chocolate-coated nuts. The taste also features tangier, citrus-driven flavours that includes orange and grapefruit as well as distinctly earthy notes that include peppermint and pine serum. It's at once like something out the oven as well as the forest.

The mouthfeel exemplifies a pacifist's mentality: it has a non-aggressive texture that encourages hops and malt to live in perfect peace and harmony. Both citrus peel and toast, pine resins and caramel, all elements both bitter and sweet are equally sanctioned, no favoritism given.

Contrary to what its name suggests, Pompous Ass is actually a well balanced and mild mannered beer, one not at all suited to snobbish quaffing but rather simple everyday drinking. In fact, I can't think of a recipe more complaisant than this - it generously provides both malt and hops, happily obliging simple, easy to please palates as well as more discerning, difficult ones.

Mit from Canada (ON)

Pours a deep browny red colour with a decent head.

Slightly hoppier than i would have expected.....spiceiness still prominent.

Mouthfeel is good for abv

Overall its very good. Will get this again.

Pours a foggy copper-amber colour, producing just under an inch of soapy, off-white froth that gradually recedes over the next few minutes. A foamy cap survives, along with some scattered, messy strands of lace. The aroma is comprised of toffee and nutty malts, with marmalade, pineapple and pine giving it a distinctly fruity, North American vibe - though hints of floral, leafy hops suggest that at least one traditional English strain was also used.

The flavours in this one are extremely well-balanced - perfect for a light, sessionable pale ale. Citrusy orange and grapefruit mingle surprisingly effectively with the malt backbone, which consists largely of toffee, slightly biscuity malts and some toasted, nutty notes. A hint of pine and a grassy, mildly floral hop bitterness wind things down nicely, with a citrusy flavour left briefly clinging to the palate. Light-bodied, with a soft, smooth feel in the mouth, aided by the relatively delicate carbonation. This ale is absurdly easy to knock back, but its tastiness does not suffer for it.

Final Grade: 4.14, a solid A-. Pompous Ass is an impressively well-made pale ale - its English roots are noticeable in the sturdy malt bill and slightly floral, bitter finish, but the North American influence is undeniable. While I would not consider this much of a 'traditional' EPA, it's still a fabulous session ale that does not skimp out on the flavour at all. Superb stuff - I like this a little more than their Canuck Pale Ale, and will continue buying cans as long as it remains in stock.

smirks from Canada (ON)

Tall boy can from LCBO. Chilled. Poured into a pint glass.

Taste: Also malty and earthy. Pumperknickel. And very bitter hops at the finish. A little unremarkable, but serviceable. Would have liked a little more caramel to balance this one out. I would say that this is close to style, just not as exciting or drinkable as I wanted it to be.

Overall: Fine. Pairs excellently with a beef stew or other hearty red meat based dish. Falls a little short in both flavour and drinkability for me.

It's a great beer, but could be more hoppy! Seems to lack body and robustness.

On cask at Volo during the cask crawl weekend. At 4.2% this was a nice pint to start with.

Poured a hazy orange-brown with a creamy off-white head. Nice lacing and decent retention complete a great appearance. Aroma has some caramel and biscuit malts with floral hopping overlaying it. Taste is good, with a nice hop bite. Bit bready, and biscuity with some cookie dough. Lemon, floral and herbal notes have English hopping written all over them. A hint of diacetyl grows as the pint goes down, but isn't too much of a detraction. Moderate body withvery restrained carbonation.

Pretty decent cask. After all the whacky ones they've been putting out, its nice to see Great Lakes put out some in more 'normal' style like EPAs and APAs. This one worked - well done!

Got a can of this at the LCBO this past summer. Note that the can I got is red-orange in color and the beer is just called "Pompous." Probably because the word "Ass" is a naughty word and can't be seen by other adults in the LCBO.

From a can into a pint glass.
An English Pale Ale fermented with American yeast... *shrugs*

APPEARANCE: Pours a two finger, medium looking, looser, foamy, off-white head with half decent retention. Head fades to a full foamy cap and leaves lots of sticky lacing on the top of the glass. Hazy rust orange in color with slightly higher levels of carbonation evident. A swirly wisp remains until the end leaving some good lacing as the glass empties.

TASTE: Dark bread and caramel sweetness up front. A slight grassy flavor as well. Earthy finish with floral and grassy hops over a sweet caramel and dark bread base. Flavorful enough with a touch of earthy hop bitterness as balance.

PALATE: Medium body and slightly higher levels of carbonation. Creamy on the palate, goes down smooth and finishes dry on the palate. A bit lighter than expected, but it's fine.

OVERALL: Decent lower ABV beer. Enough character to flavor to make it worthwhile. Not quite as forthcoming as others in the style and some of the fruity aspects of the style could be more prevalent, but it's still enjoyable enough. I'd like to see this recipe done with a more standard English yeast strain perhaps. In any case, good stuff.

The body is a deep and rich amber red. There's a bit of haze to it. An inch of light but tightly knit off white head gradually lessons to a ring.

It starts dry with a blend of grapefruit skin and prickly pine. Earthy and leafy hops quickly take over. A subtle bready sweetness peaks out in the middle. Biscuity in the finish with a soft, lingering grassy, leafy bitterness.

Its dryness is quick and cutting. Combined with its prickly level of carbonation, it almost has a feel of being oxidized. Light bodied and quite quaffable.

Overall, a decent offering from GLB but not my favorite. For me, although its dryness added to its drinkability, it took away from the flavours in the taste and made it more one dimensional.

Mouthfeel is thin and watery with a medium to light body, very light carbonation and a sweet malty flavor that ends slightly bitter and on the dry side. Overall decent for the style, but just a little too dull for my taste.

Had a pint of this at Brothers Beer Bistro on New Year's Eve. From notes.

A - Poured reddish copper and cloudy. Half finger of creamy dense head of an off white persuasion. Good lace rings and a half finger of retention.