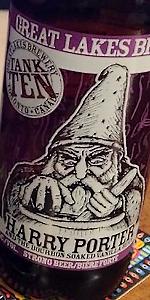 Notes: It’s been said that a great sorcerer with a single magical vanilla bean can infuse the intense depth of flavour and aroma that is found in this ale.

Unfortunately, we are hideously short of such wizards at Great Lakes so instead we simply used 1001 vanilla beans.

On tap at Volo, Great Lakes/Mike Lackey feature. Into a tulip.

Poured relatively black, with some cola colour at the edges. Mild lace, collar is left behind. Nose holds some milk chocolate, vanilla, light bourbon and is quite nice. Taste has some dark coffee and espresso (which I didn't get any hint of in the nose, but nonetheless..), some bourbon, which is well hidden and subdued vanilla again. Fairly well integrated, but is dominated by some off carbonation which fizzes and disrupts a balance which I thought was quite nice. Mouthfeel is overcarbed, and felt like a soft drink at points. Drinkability suffers from this. Unfortunately, I'm not sure what happened here as everyone praised this one throughout the night. Maybe I'll get another pour of this at some point whereupon I'll re-rate it. 4/4/3/25/3

Black body with a brown head of a couple fingers. Good retention and laces real nice. Real smooth chocolate and cocoa on the nose. A good bit of vanilla is in there too, but not much in terms of bourbon. A bit of roast as well. Flavour has cocoa and dark, roasty malts at the forfront, and some flavourful American hops that come through mid-mouth. Still a a bit of vanilla in here as well. Carbonation is completely appropriate and certainly an improvement from my last experience. A very solid porter that's supremely drinkable. 45/4/4/4/45

Bottle: Poured a dark black color porter with a large light brown foamy head with good retention and some lacing. Aroma of vanilla and light bourbon is quite nice with light vegetable notes. Taste is a mix between some vanilla beans notes with some bourbon with light corn notes and light black chocolates notes. Body is about average with good carbonation. Overall this was an enjoyable beer but I would to get rid of the vegetable finish.

On-tap at Bar Volo. Very flavourful and rich porter, particularly as it warmed. Thick, coffee, some significant bourbon and mostly the vanilla. A little real bean, it was really strong. Was it extract added? The brewers say not. A must try porter.Black bodied.Smooth mouthfeel.

Vanilla is normally associated with the colour white but there's absolutely nothing white about this beer - even its head is as dark as some mainstream stouts! Between the blackish-brown body and honeycomb wafer coloured foam it looks something like a liquid Coffee Crisp chocolate bar (which, coincidentally, it also smells and tastes like).

Allow me to clear something up that confused me: Harry Porter and the Bourbon Soaked Vanilla Bean is brewed with vanilla beans (1001 of them to be exact) that were soaked in bourbon whiskey. The beans may or may not be the bourbon vanilla variety from Madagascar, which takes its name from when the island was under French colonial (hence "Bourbon") rule.

I wanted to clarify this only because, while there's no mistaking the vanilla beans, the bourbon element is frankly so subtle that it goes undetected. Bourbon is a big flavour but without the oak barrel to back it up all the creamy sweetness of the beans obliterates any trace of it (and what little might have survived is squashed by the smokiness of roasted malts).

Indeed, the aroma alone is so saturated in vanilla as to be borderline saccharine at times. Even all the chocolate, coffee and malty notes of the base beer bow to the mighty beans. The smell reminds me of those quintessential tea wafers that come sandwiched with cream (the pink variety in particular). The taste, however, is more like the Neapolitan ones (which have the hazelnut-flavoured chocolate cream filling) and has a lot of vanilla cupcake qualities.

Harry Porter is a robust, smoky, bitter dark beer. The excessive use of vanilla in this spin-off has resulted in a correspondingly sweet mouthfeel that drinks something like a milkshake made of Nutella and condensed milk. These "magical beans" have "magically" turned flavours of dark chocolate into milk chocolate, coffee into hazelnut latte, and also chased all the hops away.

Harry Porter and the Bourbon Soaked Vanilla Bean is a delicious dessert, perhaps one of the most sweet and satisfying of its kind. (I need to find some way of baking with this!) But it drinks like melted ice cream, and when it comes down to it the original Harry Porter and its other incarnations (i.e., Fair Grounds Coffee Bean) are much better beers.

Project X bottle into snifter.
Special thanks to TheSevenDuffs for this gem.

S- Nice char with fresh pressed coffee. Definite vanilla and chocolate. Subtle bourbon with a touch of brown sugar and oak. I get a bit of marshmallow in this as well

T- Oh momma that is excellent. Right up front dark, bitter black coffee with a big punch of brown sugar and vanilla. Bourbon is hiding slightly but melds well with the dark chocolate finish.

Another cool brew from Hopsolutely. Cheers!

APPEARANCE: A clearer brown pour yields a 1+ finger, foamy, medium-thinner looking, light tan head with great retention. Bistre brown body with medium levels of carbonation evident. Head slowly fades to a splotchy wisp and ring. A swirly wisp remains until the end and leaves some splotchy lacing down the glass.

SMELL: Vanilla beans, sweet cream, milk chocolate and some light butterscotch aromas as well. Very faint bourbon in the back, but the spirit is restrained. Quite nice really.

TASTE: Vanilla and sweet cream up front, with more creamy sweetness at the swallow. Medium and lingering finish of vanilla beans, sweet cream, milk chocolate, caramel sweetness and some faint hints of bourbon as well. Sweet in general, though everything is balanced out rather nicely.

PALATE: Medium body and medium carbonation. Begins slightly prickly but smoothens out nicely as it sits, goes down fine and finishes slightly sticky.

OVERALL: Quite an enjoyable brew here. A lot of vanilla porters end up being overdone and overly sweet, but this one is balanced nicely and is an easy drinker. Soaking the vanilla beans in bourbon also added a nice, restrained spirit quality that was well done. Complex and multi-dimensional, this one is definitely worth checking out if you get the chance. Thanks again for the opportunity Hopsolutely! Recommended.

A pretty black with just some red highlights at the edge when held to the light, short lived thumbs width of mocha foam leaves no lace. Second pour leaves some spotty random lace but still little retention

S loads of vanilla and coco powder, faint bourbon with a hint of smoke, some chocolate covered raisins with a little licorice. smells great with everything meshing together in just the right proportions

T charred wood and coco come out strong, the complexity I found on the nose is not quite there, less vanilla but that still leaves a fair bit, some chocolate syrup's in there too, still decent but the smell rocked

M thick, creamy and smooth, a little sticky on the lips and zero heat, aftertaste is charred vanilla but it works really well

O pretty easy too drink and I struggle too find any of the booze anywhere except my head, if it tasted as good as it smelled we'd have something amazing but still very good

mellow for sure and something I'd drink again, this one says 7% on the label but I'd believe it's 5.3% as this ones pretty smooth. Another thank you to liamt07 I'm pretty glad I tried this one

A few changes have been made to the new version released recently in the LCBO. ABV is a bit higher and the name is slightly different. Assuming it's essentially the same beer.

A - Black pour with good carbonation coming up. One finger of beige head. Spotty lace and a film of retention.

O/D - A fairly tasty porter at a respectable ABV. Quite drinkable and enjoyable. While not the most interesting vanilla flavoured beer, it definitely does a good job. No complaints here.

Props to peensteen for hooking up this brew...

T - Much like the nose, loads of cocoa, some bitter coffee notes, and sweet vanilla. Bourbon is incredibly subdued and a tad underwhelming, but noticeable if you focus on trying to identify it.

O - A tasty brew with a solid flavour profile, though a tad disappointing from the bourbon standpoint (though to be expected given that the vanilla beans were the only thing exposed). Nonetheless a tasty brew worthy of seeking out.

Fresh Project X bottle to Founders tulip. Stated ABV of 7% and IBU of 45.

A - Deep brown with one finger of bubbly espresso coloured head that very quickly receded to a few bubbles.

S - Roasted malts, chocolate, sweet vanilla and a hint of bourbon in the background.

T - Roasted malts, vanilla, dark chocolate and the slightest hint of bourbon in the background. A noticeable bitterness that might be partially accentuated by some noticeable ABV. A fairly prominent sweetness is here as well, which is balanced nicely by the 45 IBU.

O - A solid and very interesting beer. Would happily buy this again.

650ml Bottle from the Ottawa LCBO for $6

Appearance - Dark brown colour with an above average size frothy light brown head. I can't make out the amount of carbonation showing and there is some decent lacing. The head lasted for over 5 minutes before it was gone.

Taste & Mouth - There is an average amount of carbonation and I can taste malts, chocolate, and light coffee. There is also some vanilla and a bit of a graininess. Not much Bourbon.

Overall - An above average very drinkable porter. The vanilla is subtle and the bourbon is even more subtle - I couldn't taste it. I'd pick this up again if it was in tall cans or 6 packs etc.

Saw this at the buffalo cask ale fest

Smell:
Whoa Christmas cookies, heave vanilla and porter and a touch of bourbon.

Taste:
Tastes like a fresh baked macaroon dipped in chocolate, tons of vanilla, chocolate and almond

Mouthfeel:
Medium body with lots of christmas cookie spices. The beer gets a little overwhelming, but totally potent spices.

Overall:
Great name and a pretty darn tasty beer... Helps that I like macaroons and almond paste cookies so much. Otherwise this beer would he terrible.

Many thanks to TheSevenDuffs for this beer with such a fantastic name!
Poured in to my souvineer cast glass Lord of the Rings "Strider" chalice from Burger King circa 2001, complete with light up base. Don't be jealous of my bling, haters.

Overall. A great dessert beer that isn't overly sweet. Deserves to be on the Canadian top 100 list.

Mar 02, 2014
Harry Porter And The Bourbon Soaked Vanilla Bean from Great Lakes Brewery
Beer rating: 87 out of 100 with 58 ratings