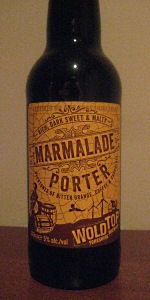 Well this is a bit of a disappointment to be honest. Overly carbonated with a rapidly diminishing head, subdued burnt aroma and a bitter but uninteresting flavour profile. I was expecting chocolate and Seville oranges, neither of which were evident. I like my stouts and porters to be rich and unctuous but this is just fizzy bitter blandness. Pissed off that I bought two bottles but at least the second confirmed that it was as rubbish as I thought. Cheers anyway.

Day 17 of the BeerAdvent Calendar.

Pours a dark brown with a tan head that dissipates that leaves a lace ring.

Nose has malt, coffee, and some hops.

Taste is coffee with a bitter chocolate dry finish.

This poured almost black that formed a two finger thick tan head, unfortunately it went away pretty quickly. The nose has the roasted malt, coffee, attributes you might expect out of a porter, but it also was a bit more malty with a bit of citrus on the edges. More of dark fruit and roasted coffee taste on the initial sip, but it too left quickly leaving a bit of hoppy bitterness. Actually a pretty good balance. Reminds me a bit of the Northwest USA / Southern Canadian Cascadian Dark Ales. Don't think that is the hops used here but the style reminds me of the same.

330ml bottle, day 17 of the 2014 Craft Beer Advent calendar - very English sounding (ok, it's the marmalade), and apparently falling into the gluten-reduced category as well.

This beer pours a clear (I believe), dark brown colour, with prominent red cola highlights, and a thin cap of weakly bubbly beige head, which leaves a single example of thin arched lace on the glass as things slowly sink away.

The bubbles are generally active and engaged in probing my willing palate, the body a sturdy medium weight, and still kind of too sour and gritty to be deemed all that smooth. It finishes on a strong drying trend - grainy malt, spent coffee grounds, and surprisingly peppy earthy, leafy, and spicy hops.

An interesting attempt at flavouring a porter - the marmalade and suggested citrus (neither of which is an actually specified ingredient) pretty much get lost in the various fruity essences, while the edgy milk and coffee notes betray the British porter origins of this offering. Worth checking out, for these reasons, and yes, if you can't abide the gluten (as opposed to actually being allergic to it).

Marmalade Porter from Wold Top Brewery
Beer rating: 85 out of 100 with 18 ratings