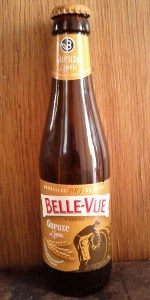 Notes:
View: Beers
Reviews: 56 | Ratings: 117 | Log in to view all ratings and sort
Reviews by TheLongBeachBum:

Appearance: Dark golden amber body with a hint cold Tea. The head effervesces at first but soon disappears to reveal a thin broken covering with some minimal lacing on the side of my aged Gueuze Belle-Vue glass from the original old Brewery. Seems to be a partially aged example as the carbonation is reduced from what I have experienced in the past and the suspended yeast particles look tired.

Nose: Sweetish aromas mixed in a slightly sour background. Mushed soft fruits in the back end, extremely bland. Rather a limp nose for a Gueuze.

Taste: Starts with a sugar soaked malty grain feel, which builds into a mildly tart center. Hints of sourness with a light smidgeon of lambicness in the back end. This is very tame indeed. The yeast actually adds a little more to this than is probably intended.

Mouthfeel: Sugary feel, sour yet sticky at times. The suspended yeasts add a toweling feel to the tongue.

Drinkability: I am ashamed to admit that I dumped the last part of this bottle, an act that means I was defeated, which rarely happens with even the worst beers that I have had. Not impressed at all.

Overall: I will state that this is my second bottle since I came to the US. The one I bought a year ago, was completely off, a term I thought I could never apply to a Gueuze. It looked like yeast infested cold Tea and tasted worse. I note that I was not the only one to get one of these but refrained from adding a Review for it. This was not that far behind it, but there is no way I am going to invest in a third. So until I get a "fresher" sample, this Review stands, and after two bottles, this Review now has pedigree as it is not exactly a one-off bad sample that I seemed to have had.

Bland, timid, lame, mild and most definitely not worth the $3.99 I paid for it!

Color beautiful, tea, clear, "tasty".
A large head with big eyes in off-white.
The aroma of wine, acetic acid, fruit. With fruit is dominated by red currants, gooseberries young, somewhere in the background peach. It is acid.
The first sip and ... is not sooooo sourly. At the beginning of cherries with their acidity, then raspberries with its sweetness and finally gently young gooseberry tart and grassy. The beer is very good balanced, not sour, not reject, great. Summing up Gueuze of Belle-Vue is a very delicate, "soft", drinkable, he lacks the clutch (not very sour) and accents villages that are so characteristic of these wines, but it is very, very good. For those who have never tried to start Gueuze perfect.

Colour is copper-like, combined with a white, foamy head. Taste and smell reminds me of an old geuze, which has been sweetened, but not as much as a faro though. There's also not much in the aftertaste. Good alternative for a regular pilsner, but nothing more.

From cervezas belgas, Almuñecar. In Teku glass. At lunch, with rice soup and merluza. Not seems lambic. No tartness Sweet, but not as much as a faro, damp, old,reminiscences to apple, marmalade. Tiresome

Poured from bottle, one of the best geuzes which i ever drunk. It is full of freshness, can be a very good choice if you do not lust for stout

As a geuze lover from Belgium, it's sad to still find this in café's everywhere.
It's not a very good beer and it sure as hell is not a geuze.

The pour is dark for the style: a lovely, filtered nut brown with a nice white head.

Aroma is light for a gueuze grainy, biscuity, with some mild yeast sharpness. It's pleasant and delicately brewed.

Flavor is likewise not what I was expecting but still quite nice. A mix of bready grain and lightly sour, fruity yeast up front, smoothing out into pleasantly sweet back end and finish.

A good beer overall but I can't help but think it might have been better--or at least bolder--if it were a bit more fresh.

Clear gold appearance, little lasting head. Very sweet aroma and on the palate, in fact you could say overly so. Just way too one dimentionally sweet, an easily available gueuze in Belgium, but not one for us beer geeks.

Pours a crystal clear reddish brown color, with almost no head besides a collar of white bubbles. Smells tart and fruity, slightly earhty, slightly of raisins. Since this is my first gueuze, i really don't have a frame of reference for the style. Taste is sweet and tart, lots of honey and fruit flavors, with a smooth woody flavor that seems to finish out this beer's flavor. Mouthfeel is pretty much flat, but interesting. An ethereal smoothness pervades this beer, making it stand apart, not saying better or worse, but different from every style and beer that I have sampled.

brought back from belgium by a friend.
Pale golden honey color witha huge white rocky head. tart vinious aroma has a acidic fruitness to it, citric acid? thicker mouthfeel than I was expecting almost sweet. deinetly not as sour tasting as the aroma leeds you to believe. almost no aftertaste at all. drinkable yes but i think this is a far cry from a tradtional gueuze. maybe a good introduction for people not familiar with belgian lamics.

Poured golden / amber with a slight haze and no carbonation (or head) at all. Also, no real aroma to speak of besides a tiny bit of malt. That tart lambic kick was there, however it was much subdued. Instead, there was an initial tartness follwed by a sweet, caramel malt that almost tasted a bit like honey.

Not bad, but a very timid and unusual gueuze when compared to others out there.

Lambic is a style that Ive had to try many times and in many varieties before I realized and attained a true appreciation of their unique qualities.

The color a dark yellow or amber with a modest and semi-creamy head, the color off white with a filmy sheet of lace to seal off the glass. The aroma of ripe fruit like pears and apples with a citrus like semi-sweetness makes up the nose, start has a mild semi-tartness leading to a light to medium top. The finish is austere in its acidity with a pleasantly dry and spicy aftertaste, a decent Lambic, but there are many better.

Belle Vue Gueuze from Brasserie Belle-Vue
Beer rating: 86 out of 100 with 117 ratings