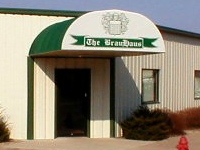 Notes: The Brauhaus used to be a brewpub until the brewery was moved off-site and the Braus started Brau Brothers Brewing Co.
PLACE STATS

View: Place Reviews
Reviews: 2 | Log in to view all ratings and sort

Visited the Brauhaus after a tour at Brau. For a town of 220 people, I wasn't expecting too much, but came away pleasantly surprised. The place is quite spacious and newly updated. A nice bar, some booths and other hightop tables provide ample seating. Two party rooms are also available. The young lady serving us was very friendly and helpful and checked on us frequently. As for the beer, they only have Brau Bros. Beer on tap. No Bud, Miller, etc. They have 10 taps in all. They had a couple of beers that are not even available anywhere else. Supposedly the head chef attended culinary school and the menu reflects it to an extent. The food menu is mostly what you would expect to find for a small town bar, but this food is of higher quality and well prepared. They even had crab cakes. The weekends is when they go all out on the menu and have some unique things. We had the breaded mushrooms which were enormous and battered in Brau beer. They came with three different sauces that appeared to be house made. The menu was large and the prices very fair for the amount of food. Brauhaus is a must stop if in the area and makes it worth the trip if going on the Brau tour.

I visited Brauhaus over the weekend. First off Lucan is a tiny, itty bitty town. The town is about 4 block wide and 4 block long. So not surprising that the Brauhaus is the only restaurant (I mean only, no fast food either) in town. At least parking wasnt a problem.

The building was a one story building with ample bar space and a few games here and there. When youre the only game in town you dont really have to be fancy, but they did have a tv projector. They also had a small room with their brewing equipment. Talked to the father of the owner and confirmed that they have 2 ferment tanks both 2bbl each. But they are thinking of expanding.

When we went on a Saturday afternoon there was not much of a crowd. But apparently the place was hoppin the night before. So the staff was friendly and helpful. The waitress was not very beer-savy, but the owners father came out and we talked for about an hour. He was more informative on the business side then the brewing but definitely could answer most of our questions.

The selection was relatively good. Being the only restaurant they were also the liquor store too, but carried their own beer from the pub or any major macro name. At the time they had a Light Lager, Strawberry Wheat, Nut Brown, Oktoberfest (seasonal), Cream Stout and a Dubbel 2004 in growlers. We tried their sampler which was very unique in itself. The glasses were long and thin and were accompanied with a carrier designed for the glasses. I guess Im used shot glass and such.

The food was of typical American and some German mixed in. I had the bratwurst and a side of fired cheese balls. Interesting. Not a whole lot of food but the taste was good.

So in the middle of no where its nice to find something good. I really enjoyed their Nut Brown Ale and ended up getting a growler. If I get a chance, I will most certainly go again.