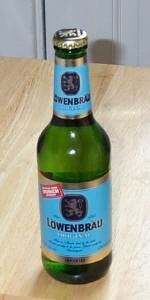 Look is a clear straw gold, medium head. Medium carbonation. Smell of grains and a bit of skunk. The taste is malty as expected with a slightly grainy aftertaste, moderate hop bitterness with hints of cardboard. Feel is light medium with a bit of dryness. It's the least best of the big 6 Munich breweries' helles beer. Maybe this beer was better in the olden days before a massive beer conglomerate got their filthy spoiling hands all over it.

Near-perfect, if not, perfect classic German lager. Some people may sneer at my review of this common lager from this big producer, but these guys must have being doing something right from the start, and maintained their brewing skills very solidly over time to become so big, and hold strong for so long in Germany where good breweries are not exactly in short supply. This was the lager that made me fall in love with German lager all those years ago.
Yeah, it might seem boring to some lager professionals, but as a normal Jo Bloggs lager lout, I once took a trip to Berlin Beer Festival, and tasted many great lagers along the long line of tents, but was still impressed by this classic brew when I reached their massive tent at the end. They might be a big player, but they are still damn good at producing this lager. Can't say that about many big brewers of lager at all.

From a tallboy can. Straw color with white head. Sweet malt aroma. Light body. Neutral sweet malt flavors. Just ok, not offensive but nothing really stands out either.

From the large pint-sized can, it pours a clear light golden yellow with a nice thick white head that slowly dissipates as you enjoy it. In the nose, a touch of bready malt. In the mouth, the same, very smooth overall.

This beer is my favorite of the German big market brews. Although every city in Germany and most bigger towns have their own local, and many of them are better, this is in my opinion the top of line of the mass produced German beers. I lived in Germany and also Eastern Europe and opt for this as the fridge-stocking beer any time I could find it.

Very malty, like all good German beers, string aroma, highly carbonated. As I said, you can often find even better beer on tap in the Ratskellers all over Germany, but if anyone wants to know what a good German beer should taste like, this is the product they should try.

Had the fake Lowenbrau in the 70's. It wasn't to bad. Managed to get a case of it 15 years ago and it was an exceptionally smooth beer. It's a shame you can't get it in the States.

From 330 ml bottle. L. Appears appropriate. S. A definite fruit tinge for mine, within a light grainy waft. T. Taste is similar, but not sweet particularly. Starts with grain, then fruit/herby middle and a dry finish. F. Light carbonation and light mouth feel. O. I am a big fan of this beer and have been since I first tried it many years ago. I don't drink it often though, but bought a 6 pack the other day and am enjoying it as much as usual. Something about the fruit tinge, not sweet or powerful, that I like.

Drank in a 1L mass at Lowenbrau Keller in Munich.

Warm gold served with 2 inches of head that slowly settled

Smells of graham cracker and grain.

Taste has above average bitterness / hop presence for the style. Very clean and crisp.

Brewed by Labatt here in Canada! Overall it is better than macro Canadian lagers but way below Geman brewed Hacker Pschorr Münchner Gold Hell or the real, on tap, German brewed Spaten Original Munich Beer.
Too light tasting compared to the real thing!
Don't waste your money! Buy Hacker Pschorr Münchner Gold Hell for what a Helles should taste like!
The real thing in brewed in Germany and on tap is actually a decent lager, brewing it in Canada hasn't done it any favours but it is well priced! And now they are destroying Spaten by allowing Labatt to brew it as well!

473 ml can
Served in a pokal glass

This beer pours a brilliant golden color and is topped with three inches of off white head that leaves spotty lacing.

The taste has that grain flavor but enough bitterness to make me forget about it after a couple of sips. The finish is clean.

It is not too bad. It is refreshing after a long, long day of work. It goes down easy.

Oh man, we are making history change now! We are finally rewriting those dark pages of our sad past when we had to drink these beers made in Hungary. Some of the German or Austrian beers for some reason were made in Hungary, only for the Hungarian market. It meant that we were left with crappy, corny beer and I never liked beer back home because of this. Of course I hated Löwenbrau too, for being that bad of a beer.
And then, decades later, only recently I learned that those beers were only made in Hungary "after the original licence" - so I was eager to try the real ones! It wasn't rwally a quest but every time I came across the originals I gave them a shot. And found that they were much better than the p*ss that we used to be drinking.
This original Löwenbrau is just the same. It has no corn, no sickening yeast, no low quality ingredients, no sharp overcarbonation. It is actually quite okay! Here you can imagine that this is actually a real beer and you start feeling the ingredients in there as well.
At the same time however, halfway through you start recognizing the hints of the hops and malts that we in Hungary tried to reproduce and which lead to this terrible taste. I slightly feel that in here too, although not to a sickening extent.
So what I can say: it was great to finally try the original of this and it's much better than what I've known. But as a boring german lager, sorry but it will never be my favorite.

P.S.: it’s pretty ironic that now when I’m adding this post scriptum to my review a couple of years later (2021) I feel that this beer is pretty decent. Maybe it is because I’m in Japan and the beers here are a far cry from what you would like to call a “decent beer...”
So I had to edit my evaluation and rate this one up a bit. It smells quite hoppy and tastes refreshing, no bitterness, no aftertaste whatsoever, it’s all oh-so-positive! Not sure if there’s anything different or if it’s just me, but this was the best Löwenbrau that I’ve ever had (the can was white and golden though, instead of the classic light blue...)
Anyway, never too late to rewerite history, huh?

Very solid beer, with good flavor and mouthfeel. Well balanced on its own, but I found that it was a bit too bitter when eating with food. Could enjoy a glass by itself but won't order with a meal again.

Poured from a bottle into pint glass.

Overall: I am worried I got a bad batch (for $11AUD it makes sense) but this was underwhelming. Okay, not bad, but nothing more.

Pours a light gold color with a minimal head that disappears quickly. Aroma is hops and malt. Tastes of hoppy bitterness with a hint of sweetness at the finish.

L: pours a gold yellow clear color.not much head to speak of.

S: grains, bread , herbs,hops and some honey notes. Tough the aroma is kind of weak.

T&F: follows the nose in much of the ways. Some light malt notes, with herbal hops in the finish.good bitterness in the finish,and the aftertaste have a decent lenght.medium bodied with a crisp bite on the tongue.all in all refreshing feel on this beer.

O: even if this is not a top shelf beer and it,s a lot of other german helles that is much better, it is a fairly drinkable and refreshing beer. I had no problem enjoy this

I first started drinking Lowenbrau in 1992, but by the year 2000 it seemed as if the taste was different and that they changed the recipe... anyone else notice a change in the taste??

Poured from 12oz bottle with bottling date of NOV16 into stein glass.

T: Clean and refreshing flavor, decent amount of malt, hops shine through brilliantly. Lasting flavors are not bad at all.

Classic from youth. This blue can was a sure item in all collections.
Bright golden color with a thick four fingers head with great retention and leaving some laces. Good for the style.
Aroma with predominant notes of bread and grassy hops.
Flavor with notes of Pilsen malt sweetness, crackers, grassy hops, something metallic and a bit of paper that later fades away, lager yeast and hints of flowers. Dry aftertaste with a low to medium bitterness.
Light to medium body with good carbonation.
Commercial reference for the style. Decent Helles, it could be a bit more attenuated in my opinion, but sure its balance is still tuned up to style.

Poured a 473 ml can into a pils glass.
moderate fisheye head, no lacing, disappeared in a few minutes. Very clear golden colour, looks like a macro-lager, only slightly darker. Gave it a sniff, got a bit of bread, pale malt, no hop aroma. Tastes good definitely malt forward, pleasing bitterness, just a hint of hop flavour, and what I did get for hop was on the earthy side, no citrus. mouthfeel was light, borderline too thin, but not watery. I bought it with fond memories of Munich,thinking it was imported, I was disappointed to find it was brewed under license by Labatts, however it was still a decent Helles, I would buy it again (if it was on sale).

Pour is a crisp yellow with semi foamy head and no real lacing to note. Smells of some grain, mild hops and slight malt. Taste is really nice, smooth flavors of mild malty hops and some graininess mixed in with a slight citrus on the finish, very nice beer and has been a favorite of mine since I was old enough to drink, always a good beer when you come across it.
Cheers