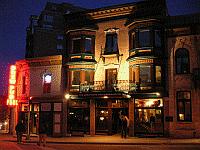 The original Great Dane Pub is located in the 140 year old Fess Hotel building listed on the National Registry of Historic Places. Opened in 1994, the space features a 10 barrel brew house, a stone walled Rathskellar, a private dining area and billiards lounge, along with a courtyard beer garden. The quality of the beer is average. Service was good. Selection is decent. I only had a pretzel and it was good.

Having been a student in Madison in the 1970s, it is interesting to see how the eastern side of the Capitol redeveloped over the last 40 years. (Back then, it was not at all urban except for a few government buildings; whereas the west side was the University and thriving.) Brewing and food has been a big part of the east side revival. And Great Dane has played an important role in the rapid redevelopment during this century.

Great Dane has decent beers, good bar food, a classic bar and a great beer garden. We were there for lunch just before a Badgers football game and the place was packed, I presume, with alumni. Anyway, a good vibe.

I've only had one of their beers and actually didn't give it a good review; but the place overall has made a quality effort. I would have liked to see them promoting other brewers' beers at the tables; but it was just theirs, hence limited selection.
The food we had was good and the menu was thoughtful enough.

One of my favorite breweries I’ve ever visited

Downtown Madison, old school kinda place...not far from the college campus....large place with a large menu...beer selections were decent but don't expect anything overly exciting or interesting...food was better then decent and they were able to bring out all the food for our large group in a timely and orderly fashion..making this a good place to go to with a group...fun spot for a meal and some decent beer options

This place has a traditional pub look to it, when you walk in the first thing you see is a long wooden bar. Several tvs to watch any sports going on. Seating area is nice, service was mediocre. The server didn't know much about the beers they had on hand so you kind of order blind unless you've checked out here first. The server screwed up our order in a couple of ways but it was remedied. The beer is okay, nothing spectacular or worthwhile going out of your way for. The food is pretty good here, a couple of steps above standard pub fare and the atmosphere is pleasant. Add a few friends and you'll probably overlook the shortcomings to just enjoy the place.

Come here to party after a Badgers game during the fall and I guarantee you have stumbled into one fine establishment- I guess hang for the beer, but the food, service, and vibe of this place is a dime, not to be missed!

We visited 14 breweries/brewpubs/taprooms during a recent Midwest trip, and all four of us thought this was by far the worst. Actually, it was the only one that wasn't good. None of the Great Dane beers was exceptional, and one was terrible. I expected much more from such a renowned place. Quite a letdown.

After seeing Duncan Trussell at the Majestic Theatre me and two friends stopped into Great Dane for some food and a few pints. Not my first time being at this location and I'm sure it won't be my last. The place was busy with people but we were able to get seated right away since it was well past the dinner crowd time frame.

The place has a traditional brew pub look and feel, hardwood bar, beer and brewing items on the wall with a view of the brewing system through a glass wall. There were 8 beers from Great Dane on draft and a few guest beers. Mostly german and english centric (pilsners, hefe, ESB) but with a few unique offerings available and two casks.

The waitress grabbed our drink order fairly quickly but didn't have much information cretique on the beers available - I inquired about the Oat Ale that was on cask and she gave a generic "its good" response. Despite that I ordered it anyway. It was creamy pale ale with english and american hops - very clean.

Food came in good sized portions, maybe slightly bigger then I prefer, but no complaints. Fish was breaded and had a nice crispiness. The next beer I opted for was the German Pils. Clean, crisp with a nice hoppy bite. maybe not as dry as I prefer but I think that would be the Czech that I'm comparing it too.

Overall, the food and beer came quickly with good quality. Nice atmosphere with out being overly crowded or loud. Recommended if you're in the area!