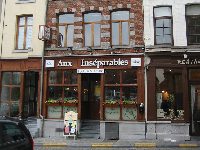 After a brief visit to Du Côte De Chez Boule, we turned left once we exited, and took a short walk up the small cobbled Rue Saint Paul which emerges at the south end of the Grand Place. Our party of 11 decided we wanted something to eat and so we browsed the Grand Place in search of a suitable establishment. We ended up deciding to try the Aux Inséparables, which was advertising food, looked to have more punters than the other Cafés on the lower southern half of the Grand Place, as well as a half decent beer list.

Situated, quite literally, in the middle of the Grand Place, The Companions has a centrally located entrance that is accessed via 4 or 5 steps. The exterior is comprised of two large wooded framed windows either side of the entrance, each of which has a picture of two Budgerigars, presumably this is the reference in the name.

The stairs lead into a single, large rectangular one roomed bar. The raised floor gives a great view of the Grand Place if you sit at the front near the windows. The bar is situated in the back left hand corner whilst the front area of the bar has numerous Tables and Chairs that seat maybe 20-30 people in total. On our visit a few locals were drinking their beloved Jupiler Pils in straight sided tumblers, chatting and smoking like Chimneys, though the atmosphere was not that bad, it seemed like either some kind of air ventilation system was operating, or the high ceiling aided the clarity of the atmosphere and the delayed the build up of the dreaded weed fumes.

Service was very slick, we were greeted by a young chap that asked us Manger?, and upon receiving the customary English nod, immediately handed us some Menus before we even sat down.

The beer list was actually quite good, and included around 30 or so beers, and whilst it included a few from the Big Boys, it also included many Trappistes and a wide ranging selection of other Belgium favorites from the smaller Brewers. Apart from the ubiquitous Jupiler, I noted that Westmalle Tripel was available on draft, which I immediately opted for, and it was in a superb fresh condition, so much better than the bottle. The local Binchoise offerings were well supported as well as other more notables like Duvel, Orval, Kasteel, but sadly no lambics. A Cooler located nearby the end of the bar had many bottles neatly arranged, and it was possible to pick your selection from here also. The Cooler was worth a look, not least because it appeared that it included beers not on the beer menu, but I was incredibly hungry at this point and missed the opportunity to peruse it (Ill never go to heaven!).

The food was basic Belgian fare, but it was wholesome and well priced. I decided to go for a plate of Spaghetti Bolognese, which arrived in decent time, steaming hot, freshly cooked and with a nice pile of freshly backed sliced bread with some fresh butter to accompany it. The Bolognese sauce was beautiful and the whole bowl of Spaghetti was extremely filling. So much so, most of our party struggled to finish their beer, so we only ended up having just the one beer in here as time was pressing and we still wanted to try the nearby Taverne Chamade before catching the Train back.

A decent place to grab a cheap and quick bite to eat, whilst sitting amongst the locals and grabbing a well-priced beer from a reasonable selection. A nice surprise, given the fact that most Cafés in Binche are short on a good beer choice.

Aux Inséparables in Binche, Belgium
Place rating: 3.5 out of 5 with 1 ratings