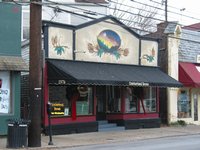 The bar is nice and cozy with appropriately dim lighting. The bathroom has a great beer can collection and this part of Louisville is simply awesome. The beers are varied with a good selection and a very nice staff. I didn't try the food but the menu appeared eclectic and interesting, though not my style. The beers were all very good but finished watery and weak. Overall, I'd go here again and if I lived nearby would certainly hang out here often.

A pleasant brewpub situated in the heart of the Highlands district in Louisville, KY. Highlands is a great place to check out if you want quality-made local beers, and you want to pair it with some delicious and rather inexpensive pub-style fare.

Walk inside and to your right you can get an inside look at the brewing operations and see their fermentation tanks through a large glass window. The bar is a little further down on the right hand side while the left has about a half dozen tables with seating for 4-5 at each table. There is also an upstairs room that you can reserve for parties and gatherings. There are also a couple of tables on the sidewalk outside, allowing you to take in the sights and sounds of Bardstown Road when the weather is nice out. If you go, you may want to get there early (especially on the weekends) or plan on going later in the evening after the regular dinner-time rush has moved through, as seating can sometimes be a little tight. But for good reason - Cumberland has fantastic beers and food on offer.

The beer menu features only Cumberland's in-house brews, all on draft - no bottles and no guest taps here (if you want those, you can check River City Drafthouse which is literally 5 steps next door). Cumberland typically has 5 or 6 regular beers on tap, including their famous Nitro Porter, and a further 1 or 2 seasonal taps (showcasing such offerings like their Slewfoot Amber, a housemade mead, a yerba-mate style beer, and, on special occasions, even a cask-ale offering).

Their food menu showcases standard pub fare, but with a nice kick of flair. Sandwiches, salads and burgers are the regular options, but Cumberland always has weekly/nightly food specials that trot well off the beaten path - fried soft-shell crab sandwiches, anyone? (BTW - fantastic!) Some of the more memorable items on their menu include the house-made pale-ale beer cheese (try the Habanero version - it's got quite a bit of heat!), the sweet potato fries with cinnamon dip, the black-bean nachos (it is a huge plate so plan to share), the Bison burger, their fried chicken cordon bleu sandwich, a fried bologna sandwich with American cheese on a toasted bun (a Louisville classic), and their fish tacos. Wide variety of menu items, everything tastes fantastic, and prices are reasonable to boot.

Small place, kind of a dive bar located in what seems to be a big time hipster neighborhood, brewery area is visible behind the bar. They had about 8 house beers on tap we tried them all and were not impressed. Most were ok, but nothing was especially good, just old school-sketchy brewpub stuff from back when almost no one would have known better. The food actually looked promising from what I saw but we didn't eat. Service was good, even though they were packed.

Bottom line: don't be fooled this place is seriously overrated by the locals. Don't bother unless you are looking to tick every beer in Louisville.