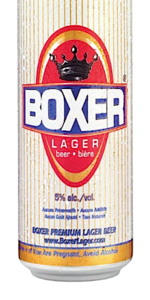 From a 710 ml white and gold pinstriped can. Am I the first person on this site to review this beer? Why am I surprised....

Sour grains and and some veg on the nose.

Sweet honey-like malt, dry musty middle, cooked veg on the finish. Nearly mead-like in its sweetness at first, it turns dry quickly, surprisingly dry and dusty, with a return of the veggy cloying sweetness in the finish and aftertaste.

Mouthfeel starts out neutral, light and carbonated, gets fizzy towards the finish, smooth in short bursts, but fizzy in general.

Sweet fizzy corn sweet beer in general and if that's what your're looking for then your're in heaven, otherwise this is a massive pass.

This is the shittiest beer I've ever had in my life. I drink cheap beer when I have to, but this is just god-awful. I took it out back and shot it with the 12 gauge. Do not buy this. Spend your money on a six pack of Snake Dog IPA and 2 40s.

Look: Clearish gold...
Taste: Like metal and water... sweet and malty.
M: Like shit. This beer is terrible.
Overall: I would rather drink any other cheap beer (in the event that I had to) any day over this.

Sorry for hating, I love beer, but this doesn't even deserve to be called such.

After looking at the CAN, I realized that this is a dual beer, made by Minhas and with their logo all over it, but made for Mountain Crest, as noted at the bottom of the CAN. I am duplicating my review here also in the hopes of dissuading others from allowing this to pass their lips.

The Crack & Glug came off without a hitch and I had over a finger of foamy bone-white head briefly until it just passed over like a cloud on a windy day. Color was a deep golden-yellow with NE-quality clarity. Nose smelled like green apples. That's it. Acetaldehyde and probably due to their yeast strain. Mouthfeel was fizzy like pop and had a bunch of bubble gum-like flavors on the tongue, including apple and grape. Jeez-O, man, but this bordered on flat out disgusting. Finish was Gag City Central, leaving me thankful for something to eat to kill the taste. My oh my, but Minhas never fails to disappoint. I wanted a beer real bad and I got a real bad beer, as is their standard. This is not going in my cooler or in the cooler of anyone with whom I am associated if I CAN help it!

Highly advertised (TV, plus posters in every liquor store you go past), "What sets us apart is the price" - great, more cheap beer. 710 ml King Can. White can with gold pinstripes, large lettering.
Clear, golden yellow color, little head that was instantly gone and therefore no lace.
Slightly sour, wet vegetable smell. Slightly sweet flavor to start then taken over by cooked vegetable. Dryish finish but still left sticky coating on the tongue. Light mouthfeel, thin and fizzy. They sell a ton of it, so people must like the buck a can price.

They have changed the label again slightly, so had to drink another 710ml can. Not any better the second time around.

The pin striped can is something different all together. Straw yellow appearance with surprisingly foamy head. Smell is very sweet and grassy.

Taste is sweet with a citrus hint to it. Also picked up a grainy, cooked vegetable taste. Taste is very watery with high carbonation. Aftertaste is very sweet and boozy, similar to malt liquor.

Overall, this beer is plain and unbalanced with little redeeming factors, one of the cheapest that you can buy to. Would only recommend this if you are broke.

355 mL can from TBS; no freshness date. This stuff seemed to be reasonably popular out west (it was one of the better-selling brands at the liquor store I worked at for a while), but I honestly don't think I've ever seen anyone in Ontario purchase this. Is that because it's genuinely awful? Or is it just a bit of a latecomer to the (oversaturated) Eastern Canadian value-brand lager market? Stay tuned for the riveting conclusion.

Pours a clear golden-yellow colour, topped with slightly more than one finger of soapy, frothy white head. It fizzles away over the next few minutes; the foam is a little more resilient than your average macro lager, I guess, but not by much. At least it leaves a decent swath of lacing behind before it finally wilts into a thin film at the surface. Looks fine, but the aroma leaves a lot to be desired - it is unabashedly sickly-sweet, with loads of corny adjunct, corn syrup, green apple skin, and not much else. Pretty unappealing even by macro lager standards.

I tried Boxer Ice a few months ago, and as one might expect, this stuff tastes essentially the same, with slightly less booziness being the only discernible difference. Corn syrup is by far the most dominant facet of the flavour, accompanied by notes of green appleskin. That cotton candy/bubble gum flavour I notice in all Minhas beers remains difficult to ignore, and contributes to this brew's unrelenting sweetness. The finish is a little fruity, and doesn't linger long. Thin-bodied and watery, with moderate carbonation that really allows the fruity/sweet aspects of the flavour to come through - whether this is an advantage or not is probably a judgment best made on an individual basis. I don't mind it, but I can see why it might make others gag. Drinkable enough, but not something I'd want to pound all night, as I imagine the sweetness would become annoying after a while.

Final Grade: 2.35, a disappointing D+ grade. As flawed as this beer undeniably is, it honestly doesn't offend me all that much. Yeah it tastes weird - but at least it's noticeably different from the vast majority of nearly identical value-brand lagers available these days. There's something to be said for originality. One thing I will say is that Boxer Lager has no semblance of balance whatsoever - there is only sweet adjunct flavour, with no hint of anything resembling hops, and relatively (for the style) low carbonation that does nothing to mask its saccharine nature.

I'll probably be pretty sick of this stuff by the time I finish the 12-pack, and I doubt I'll buy it again because there are numerous undoubtedly superior value lagers available in Ontario. But if you're broke (like me) and need a cheap beer to toss back, Boxer Lager might be worth a test run. Of course, self-respecting BAs are best served by avoiding it entirely, except for perhaps the most masochistic.

Boxer Lager has a medium, white head and a clear, bubbly, golden appearance, with splotchy lacing. The aroma is metal, sickly-sweet, green apple and musty grain. Flavor is of sweet, green apple, damp barley, and a dash of hops. The mouthfeel is medium, and Boxer Lager finishes semi-dry, cloying, and unpleasant. I rate this beer poor. Avoid it!

M feels like another thin lager with decent carbonation

D bad taste and smell is never a good thing in a beer, I wont be drinking this again soon

Not much to say about this lager. Picked it up for a dollar at the House of 1,000 beers. Color is a pale yellow with a fairly good amount of head. As expected it fizzes out rather quickly.

I didn't really like the taste. It had a sour apple kind of taste that distracts from typical corn or sweet malts.

Mouthfeel is as good as it is for a lager. Fizzy, light and somewhat refreshing,

Overall I will not buy it again. Taste is almost as sour as Heineken. Don't buy it if given the option.

355ml can poured into a 16oz pint glass.
Another fine lager courtesy of the singles bin.

T - Touch of grain, water, and blood? Incredibly bland taste. A hint of sweetness is present in the finish, but doesn't do nearly enough to salvage the flavor. I'd always seen people on here referencing a bubble-gum taste in their beers, but had never detected it myself, until now. Maybe some metallic notes in her as well.

D - Cheap, but unpleasant. There are much better cheap beers out there.

Straight from the can with this one.

Straight up sweet in the nose.

general sweet in flavor. That is pretty much it.

A: Pours a clear yellow with two fingers worth of foamy white head. Settles to a white cap and left a lot of lacing.

S: Very sour grainy aroma. Reminds me of some homebrews while they're still fermenting.

T: Hardly any taste to it. There's maybe some of that sourness but not nearly as much as in the aroma. Maybe some veggie tatses in there.

O: You get what you pay for with this beer. They sell it with the cheapest legal price. But I would actually buy this before some other macro beers.

Can, straight out of it...gave appearance a 2 because I poured a little something onto the ground and saw it. Smell is sweet adjunct, lots of corn. Alcoholic soda. Taste is sweet but bland. Mouthfeel is not offensive but that's about it. Dull. Overall, it's a loser, but I saw it for $2.49 a 6er and had never tried it before, so what the heck, why not. Now I need to figure out what to do with the other 5 cans.

I mean, this beer is not gonna see any extended time in victory lane, but let's examine the details a little futher. They sell these bad boys in 36 pack cases, for around $13. Let's be real here, this is a great deal. For around $.35 a can, you can experience 36 crappy beers. If you're a high school kid, or even a college kid who isn't 21, this beer is a fantastic bang for your buck. After about 4 or 5 of them, it starts tasting alright. Chill it, and you may just think you're drinking something halfway decent!