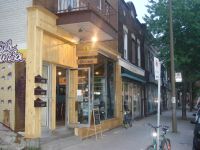 View: Place Reviews
Reviews: 33 | Ratings: 56 | Log in to view all ratings and sort
Reviews by Yoonisaykul:

Like any brewpub (okay not really a brewpub but close) I really wanted to visit this place. As soon as I stepped inside, something felt weird. It looks like a great place to grab coffee but didn't really have that pub/beer place feel to it. No matter, I took a seat at the bar and ordered.

Only visited this one twice but stayed for about 4 hours on both occasions. After my first visit, my girlfriend who enjoyed it a bit more than me asked if I'd be returning to which I answered: ''I have very little desire to do so but maybe one day''.
A couple months later I got invited for a business meeting and realized I did not want to return a third time. On the second trip I tasted some of the worst beers I've ever had (especially their house APA). So selection is hard for me to rate: Big selection with a considerable amount of bad products.

So..
-Looks very good and has a terrace out back but has a weird coffee shop vibe.
-Good quality food and beer but no real effort in preparing it.
-Staff knows beer but is not the friendliest and kind of snobby.
-I found it more expensive than other brewpubs in the city.
-They played Canadiens hockey games during playoffs (good thing)

I think this place is great for Quebec beer and other people (and other reviewers) seem to really like this place so I won't say don't try it but I'd rather just buy bottles from the featured breweries and try them at home and go to any other of Montreal's great brewpubs for great beer on tap.

Also... both times I left and went go to Dieu du Ciel which is real close... just sayin'

Came here with a friend on my first visit; was flying solo the second time.

The beers ranged from good (Petit) to mind-blowing (Dorothy), and the draft and bottle lists were impressive. Service was super friendly the first time and non-existent the second (bartender disappeared until I had to pay). Didn't eat on either occasion. Overall, Vices & Versa is a very good beer bar that is certainly worth visiting if you find yourself in Montreal.

Astonishing range of beers on tap from one of the richest brewing regions on the continent. Also some bottles including rarities / limited edition bottles. Part owned by Brasserie Dunham. This place is not to be missed by any beer drinker in Montreal. Staff are knowledgable and helpful - food just snacks - but very tasty.

Vices & Versa is a small bar not far from the Marché Jean-Talon to the west, and Brasserie Dieu du Ciel to the east (a 20 minute walk).

There's a very nice deck out back, and lots of wood and exposed brick in the small rooms inside around the bar. It can get a little bit tight, but the service is exceptional and you shouldn't have to wait long for a beer. In fact, with 32 taps to choose from, as well as up to 8 cask ales, it'll probably take you longer to decide what you want than it will for them to deliver it to you.

Besides the deck, the selling point for me is that all of the beers are local. As a non-resident I want to try the local brews and there's no where else in Montréal to do that. Sure, if you've got the time you can visit some of the brewpubs and breweries, but this is kind of a one-stop-shop.

Beyond that, they have food! Sausages, sandwiches, pizza, burgers, nachos and frites! And if you want to get a little fancier than that they've got excellent cheese and pâté plates. It can sometimes be hard to find food when you're "beer touring", and this is a nice stop. Highly recommended!

This is a great place, easily one of the best beer bars in Montreal. It is a seemingly small bar that is stretched into an adjacent store front (or at least it seems that way). It looks like nothing from the street though. Inside is a bar and kitchen with interesting and diverse Quebec beers and dishes of all sorts. They have 30 some-odd taps, casks and a full bar with lots of scotch and whiskey. The service is excellent and the food is very good. Additionally they are very active in the scene and host a variety of different events throughout the year. An excellent bar, I just wish it was closer to my house...

Tourists, this is the best place to go if you want to try a variety of everything Quebec beer has to offer in one place. Close to delicious Little Italy food and whatnot as well!

Curiously this bar is very close to the brewery Dieu du ciel! It's at walking distance.

The bottle and on tap selection is incredible and the atmosphere really great too. I was there a couple times and if I'm ever back in Montreal will stop by again

This wonderful establishment can be found on the Boulevard St-Laurent (Bus 55) and is well worth the trip. It is a homey place with a bar/dining area along with a separate dining room and a patio out back. The beers are all made in Quebec and cannot be found anywhere else outside the province. The selection was excellent with a large variety of IPAs, saissons and a few bretts and stouts along the way. The service was great as was the food. If you ever had the desire to try Bison Burgers, this is the place. An all around great place to hit and without the hipster intensity found in the Latin Quarter.

Atmosphere: didn't really check out the inside too much but the back patio was very nice. huge patio with nice maple trees limbs hanging into it give it a nice backyard feel. overlooks a nice little park that had a pick up basketball game going on, would love to play some basketball and then drop off for a beer.

Quality: Looks like they represent all the Montreal breweries and a wide variety of styles

Service: pretty good service, they spoke English well and were pretty good about looking over our table. I knew the beers on the list pretty well so not sure how helpful they are if you have questions or need suggestions

Selection: I heard there is a good bottle list but I stayed on the taplist. 30 or so taps, covering a wide variety of Quebec breweries and just about every style. certainly easy to find something you enjoy.

Food: not a huge or crazy menu but the food I had was very well prepared and quite tasty.

Overall: a must hit in Montreal for the BAs. huge taplist nicely covers the things you will want to try when here. Look to bottle list for some rarities too I believe. Great food and great atmosphere

Some of my friends love Vices & Versa; I am, however, not as enamored with this beer bar as they are. The vibe is quite relaxed and a nice place to have an after work beer. They have a very good selection of craft beer - mostly from Quebec. My real problem stems with its service. Their beer board is handwritten and sometimes hard to read. More problematic is the absolute apathy of their staff, who have mislead me on more than one occasion. Some of them simply don't know much about their beers on tap, and don't seem to care. Food is average.

One of the better bars in town, with attention to extensive tap and bottle list. Few lousy choices - they try to give the people what they want although 96% quebec.most dunham i have seen in town. Packed and everyone in their clique.

Friendly and bilingual, meaning that English is freely spoken here. This is not alway the case in Montreal (I'm looking at you Brasserie du Ciel). The vibe is low key and easy going.

The selection is extensive and mostly "Artisanale Quebec"--32 beers on tap and only one is from the USA and one from Ontario.

The food was basic but very well made. The choices are limited but there seemed to be something for everyone.

This is a really nice spot that takes a taxi to get to from downtown as a tourist, but is worth the trip. Great atmosphere, excellent service and a nice variety of options on tap. A good representation of different Quebec breweries was available. Had the nachos to eat, which were very good.