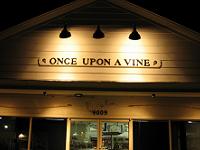 View: Place Reviews
Reviews: 58 | Ratings: 80 | Log in to view all ratings and sort
Reviews by JEdmund:

While driving to McLean, Va., from South Carolina, I took a quick detour off the interstate to check out One Upon a Vine. I was immediately greeted by a large selection of beers in both the cooler and on the shelves I had hoped to find. There was a number of American beers I was looking for, and they had many of them. I was even lucky enough to score a six-pack of Nugget Nectar. My only complaint and disappointment was there mix and match section. They had numerous bottles to choose from, however, many of the beers I wanted were not available for lone bottle sale (West Coast IPA, Bear Republic, Dogfish Head, Victory, and some others). The staff was friendly and helpful, and they even had a man offering samples of four Russian beers at a tasting table. I'm not sure how their prices compare to local competitors as I'm not from the area. I would definitely shop there again.