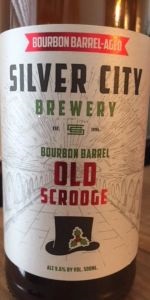 Notes: Of any character none would benefit more from the smooth mellowing kiss of bourbon than Old Scrooge. A long slumber in single use Kentucky Bourbon barrels marries fruity esters and rich malt body with cherry, wood and vanilla.
View: Beers | Place Reviews
Reviews: 11 | Ratings: 45 | Log in to view all ratings and sort

Poured from a 22oz bottle into a stemless wine glass.

Look is a hazy brown with amber highlights and little to no head.

500ml bottle - 2019 vintage. Opened 12-24-19.
Dark brown - amber, fairly clean and bright when held against the light. No head to speak of, only an off white ring and a wispy island in the middle of the beer. Called up about 1/4" of head when agitated about 1/3 way through.
Boozy wood, sweet caramel and not a whole lot beyond that initially. Fruity esters start to show about 10 minutes in.
Malty and heavy with barrel influence, wood, dark fruit - raisin. Vanilla. Port-like sweetness in the middle.
Full body, slick/oily mouthfeel. Long, semi-sweet barrel finish. Some alcohol warming.
Good. I'm interested in trying the base beer next.

Reddish-copper body; thin yet lasting head; some rings of foam along the glass. Sweet, fruity aroma interlaced with notes of leather, roasted nuts and hints of bourbon. Sweet, fruity flavor; dates and dried raisins; bitter and boozy. Warm, heavy body; sweet and dry elements vie with each other yet ultimately balance things out.

Good beer. Barrel covers up most of the base beer. What little I can taste seems to be sort of a blend of a wee heavy and an old ale. Wish the base beer was a little more prominent. The barrel character refined but slightly rigid.

Pours an amber red, with little head and good clarity. Smell is very much of Kentucky bourbon at first whiff, but a deeper examination reveals sweet malt and dark fruit. Taste is complex. Warming bourbon, notes of vanilla from the barrel, followed by a sweet barleywine style base. Stone fruit strikes a balance on the woodsy, boozy finish. Light carbonation allows the flavors to coat the tongue well. Alcohol seems pretty well hidden for 9.7%. Would buy again, but would love to see the base beer to really understand how much this has been influenced by the bourbon itself.

I found this one in Oak Harbor at the invaluable Whidbey Beer Works. It has aged very well, even on the shelf. This is a classic, and if you see it, buy it. This 22 oz bottle was just eleven bucks.

The fragrance makes you delirious with the alcohol, the oak, and the endless Bourbon aromatics. Then the deep rich and boozy taste burns slowly down the throat. Toffee flavor with some burnt malt notes. Just hot enough, it's like Yukon Jack with a malty character.

This is one of the better Bourbon barrel-aged brews I've had. The treatment works really well for this one. It tastes more like a Barleywine, but one with some butterscotch notes. If this is an Old Ale, it's definitely the best I've had in that category. I hope Silver City will make this an annual event.

22oz bottle of the 2013 vintage given as a Christmas present by my brother. I believe he picked it up at Gravity in Olympia, Washington. According to Silver City’s press release, this was “Vintage 2013 Old Scrooge Christmas Ale … aged for a year in Heaven Hill Bourbon Barrels then bottled for a limited 22oz release.” Apparently, only 60 cases were made available, and it’s dumb luck I’ve got a bottle because my brother bought it as a sort of consolation prize because I’d asked for a bottle of SC’s Fat and he couldn’t find it.

Poured a dark mahogany color that took on a rubyish look when held up to light. Bubbly, light tan head that dropped quite fast in my St. Bernardus goblet, leaving spotty lace. The head was easily agitated back to life.

Sweet, boozy and woodsy in the aroma. There may well be some hop aroma, but I sure couldn’t pick it up. Warmed up, I got some toffee and some pipe tobacco as well.

Whoa! Sweeter than I expected this to taste, but in a good way. Sure there’s bourbon flavor a-plenty, but there’s also toffee, brown sugar, and I get some pipe tobacco. There’s also something that reminds me a bit of crème brulee – the dessert, not the Southern Tier beer. This dessert-like sweetness is balanced by a raisiny, dark fruit bitterness. There’s a teeny tiny bit of some bitter hop flavor, but it mostly hides in the corner.

Creamy mouthfeel, with carbonation about where it should be. Full bodied, like I expected.

Hedonistic is the best word for this beer. It actually makes me think this is what a Belgian Quad would taste like if you left out the Belgian yeast. At 9% alcohol and in a 22oz serving, this is plenty for now. Clearly not a session beer, but an outstanding nightcap, dessert beer…or toasting beer when your team returns to the Super Bowl!

Pours a middling brown, translucent. Little to no head, and not much carbonation.

Smell is mild. Barleywiney -- yeast and alcohol, plum or dates.

Poured into a Blanche de Namur small pint glass. Pours a bronze amber with a thin, fast dissipating head that leaves no lacing. Aroma of caramel malt and bourbon, bourbon soaked dried dark fruit. Flavor follows aroma; caramel malt, bourbon soaked figs, dates and other dark fruit, vanilla, finishes with a nice blend of bourbon, malt, vanilla and some oakiness. Medium bodied with light carbonation. They had me at bourbon, and the base beer (I've never had regular Old Scrooge, but want to try it now) supports the barrel flavors quite nicely. Reminiscent of a mild English barleywine or scotch ale with bourbon ageing. Nicely balanced and tasty. I liked this. This is apparently the 2013 bottling although it has just arrived on the market (with at least two shipments), but is the type of beer that is welcomed a year later. No oxidation or overt signs of age.

A: Poured a murky reddish caramel color yielding a medium dirty white cap that quickly fades. Light lacing, bubbles, no head. Typically what I expect from this style.

S: Hints of vanilla, bourbon, figs and fruit cake. Some caramel and toffee present as well.

T: Initial fruit cake, toffee and caramel with some cocoa. As I roll it across the tongue and wash it around some booze, bourbon and vanilla kick in. The finish is sticky sweetness, bourbon heat and coconut with a small amount of woody Earthiness linger on the palate.

M: Medium to full bodied, low on the carbonation end which is ok for the style. Little bit of sweetness sits on the palate, coats the mouth for a short time but a lingering light heat and short bitterness remains

O: Not to shabby, glad I grabbed one more.