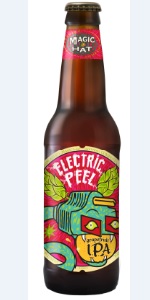 Notes: Electric Peel is an electric IPA that sends shocks of citrus hop flavors through a medium malt body amplified by grapefruit peel, leaving behind a bittersweet finish.
View: Beers | Place Reviews
Reviews: 99 | Ratings: 499 | Log in to view all ratings and sort
Reviews by NeroFiddled:

Notes: Hazy golden body beneath a surprisingly full and fluffy bright white head that leaves very good lacing. Excellent appearance overall! The aroma displays the Magic Hat house yeast along with grapefruit. I'm a little surprised that the yeast over-rides the grapefruit, but OK. The flavor displays both as well, but with a bit more grapefruit which is nice. It's surprisingly bitter though, not unlike real grapefruit - except that I can't just sprinkle some sugar on top of this! Wow! Off-balance in my opinion. The malt backs up everything else but doesn't do it's part to level things: it's nice, fairly grainy, and just slightly sweetish, but not full enough to compete with the bitterness that's present. Light-medium in body and gently crisp across the palate. Overall, odd. I think the grapefruit peel added a bit too much bitterness on it's own, and it just spiraled from there. But they taste these things first, right? R&D, brewer's roundtable, whatever? Overall: really just a one trick pony that does a good job of putting forward grapefruit rind but without balance. PASS.

12oz bottle poured into a Spiegelau IPA glass. Pours a pale, slightly hazy golden color. Not much head and not much lacing. Grapefruit accent very prevalent in the scent. Light bodied feel with not much depth. Hop bitterness hits first and then the grapefruit taste makes a late appearance. Not in the same class as Sculpin Grapefruit (8.0)

The last MH release I purchased was Big Hundo in a bomber. I may not care much about their business model but I do have a slight interest in what they're brewing.

Pours a nice golden color with a head that quickly fades.

Smells like a grapefruit variant of #9. To their credit, it's not cloying and does offer hope that they're using actual citrus-dominant hops.

The grapefruit fades immediately, followed by a very basic malt profile. There's no "oomph" back there. Just a decent amount of bitterness.

Kind of flat at the back of the tongue. Bitterness threatens to rain down my throat.

My apologies for the cynicism present here. This is actually a quaffable IPA if you ignore the grapefruit peel. I see that HIPA is back. Have to try that as well.

Pours a hazy, golden wheat color with a tight, white head that leaves chunks of lacing.

Smells of grapefruit and grass.

Tastes of the grapefruit with a decent malt backbone and some earthy hops. Grapefruit leads off with a decent amount of bitterness. This gives away to a little malt sweetness with notes of bread and cracker as well. Earthy hops round out the backend adding a bit more bitterness. Finishes with a lingering bitterness.

Overall, this is decent, but nothing special. Comes off as pretty one note.

Hardly worth reviewing - if you want a grapefruit-flavored beer, here it is. Less sweet than others I've had, to distinguish. In fact, not sweet at all. Flavor is more like grapefruit rinds or that white stuff right under the peel, less the pulpy part. So not totally my thing, but you now know what expect. Points for being exactly what it says.

Excellent citrus taste. Definitely a return to this beer in the future.

Poured into a tulip glass this beer is a clear slight golden straw yellow with a 2 inch thick white frothy head. Smell of grapefruit, lemon, orange, and some bread-y malt. Nice amount of grapefruit in the taste, kind of overall weak and bland with a big amount of grapefruit bitter, has a bit of citrus, bit of bread-y malt. Really only seems to exist to showcase the grapefruit. Mouth feel is light to moderate but mostly light, okay carbonation, and a light body. Tastes more like a american pale ale to me with it's light malt and body.

Pours a clear golden color with white head. Citrus fruits, grapefruit mainly on the nose, with a little grass; follows onto the palate. Finishes with more citrus, and not much of a bite.