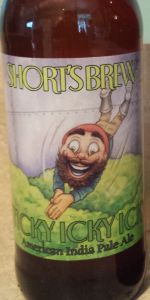 Notes: Sticky Icky Icky is a radiantly clear, copper-colored American India Pale Ale. It is loaded with citrusy hop aromas of oranges, nectarines, and apricots. This light, yet full bodied ale is perfectly balanced by equal parts sweet malt and juicy hops. A medium bitterness along with a subtle earthiness lingers in the finish.

This new American India Pale Ale is what Ryan Hale, the head brewer at the Bellaire pub, referred to as his quintessential IPA. Ryan combined all of his favorite hops resulting in what he described as “pure juicy goodness”. This beer is loaded with all of the big citrus and fruity flavors American hops can offer.

Pours a bright, medium gold, a little cloudy, with a one inch head and some foamy lacing. Smells of pine, grapefruit, pineapple, orange, yeast, light malt, light funk on the pour. As the hop aroma fades- and it does, a sweet aroma emerges. The taste gives more citrus than the nose- grapefruit, orange. some pineapple, some pine and resin in the background, malt, yeast, a strong amount of bitterness throughout. Smooth, well carbonated, a good body, fuller for the style.

Good flavor, well balanced between the hops and the malt. Good aroma early, enjoyable to drink. Worth trying a couple bottles.

I was reading about all the early hype on this beer so I decided to make a run across the border to give it a try. No bottle date, but it's a recent release, so it's fresh. I'm pouring this into a twelve ounce tulip glass.

Look- Pours a cloudy gold color with a minimal amount of white foam that settles quickly.

Smell- Passion fruit, guava, and some pineapple. It smells like tropical punch!

Taste- Guava, mango, passion fruit, and a hint of pine. There is a bit of a grassy earth-like finish that reminds me of a wet hop ale.

Feel- It's a little on the watery side with a bitter bite in the back.

Overall- This is one very fresh tropical tasting IPA that has qualities that remind me of a wet hop ale. It's probably one of the best I've had from Short's and would gladly welcome in my beer fridge any time.

2017-11-24
12oz bottle served in a snifter. Brought home from Philadelphia by my wife, brought to her by some friends from Michigan. Packaged 10/25/17. Bottle barely gasped when I cracked the top...makes me wary.

Taste is mild and piney. Surprising note of sweetness.

Mouthfeel is smooth, light, not as flat as I feared but not carbonated enough. Not bad, but not special.

This beer pours amber in color with golden highlights. It has a light haze, and I can see suspended yeast. It is topped with two inched of beige head that rings of lacing as I drink.

When I first poured it I got melon and citrus along with a healthy dose of juniper. After a bit the malt became apparent and some pine come out.

The taste is very similar. I got an immediate splash of citrus and melon. Pine was very noticeable in the finish. The pine began to pervade my palate about one third of the way through the glass. I could taste some malt as it warmed a little.

I really liked the initial taste. Once the bitter pine flavor took over I liked it less.

Appearance
Golden with 1 finger of loose off-white head. Light carbonation with tons of sediment floating about.

Overall
A juicy IPA with a relatively low bitterness. One of the better offerings that I've had from Short's. Go get some!

Bottled on 10/14/16. 12oz bottle poured into a tulip. Pours a hazy deep golden; big chunky eggshell white head that sticks around leaving great retention and very sticky lacing. Some minor sediment is noticeable. Lots of froth. The aromas are tropical with some hints of citrus. Hints of pineapple along with some grapefruit. Some cracker and bread is present. Malts are there but not overwhelming at all. The flavors seem to follow the nose. More pineapple and lots of grapefruit. The citrus flavors really shine. Lots of pine with some fresh grass in the mix. Solid earthy bitterness with a nice balanced malt backbone. Alcohol goes unnoticed. Mouthfeel is very nice. It's on the lighter side of medium-bodied with moderate carbonation. It's very smooth and easy to drink.

This is a nice IPA. The aromas start off great, but seem to quickly fade. The craftsmanship is on point. Very enjoyable stuff.

Canned on 8/6/19.Poured into a pub style mug a slight orange tinged golden with a full finger rocky meringue-like head atop.Citrus punch in the nose with a bit of grass,full on northeast here.Much drier on the palate wich is great,citrusy but with a drying mild bitterness that lingers in the finish,it never gets overly sweet.Not a dank bomb but an ipa that never gets overly sweet and is highly drinkable.

I picked up a bottle of Short's Sticky Icky last week at the Lager Mill. I've been anticipating this beer and I'm interested to see what how it turns out, so lets see how it goes. 2015 Vintage. Poured from a brown 12oz bottle into a snifter.

A- The label looks good, it's got a nice design and it's eye catching. It poured a nice yellow color that took on more of a golden hue when held to the light with almost two fingers worth of creamy off white head that died down to a thin ring that stayed till the end and it left some spotty lacing behind. This is a good looking beer, I have no complaints.

S- The aroma starts off with a higher amount of medium sweetness with the hops being the first to show up and they impart a nice mixture of fruity, floral and dank hop aromas with the fruit sticking out slightly more than the rest. Up next comes a little bit of doughy yeast that leads into the malts that impart some biscuit, bready and sweet malt aroma while making for some nice balance. This beer has a good aroma, I like the hop profile and the balance.

T- The taste seems to be similar to the aroma and it starts off with a slightly higher medium amount of sweetness with the hops showing up first and they impart the same aspects that they did in the aroma and this time they all show up evenly. Up next comes the malts which are just a little lighter than they were in the aroma and they impart those some bready and biscuit like aspects with some sweet malts and doughy yeast showing up in the background. On the finish there's a higher amount of medium bitterness with a nice hoppy aftertaste. This is a good tasting beer, I have no complaints.

M- Fairly smooth, crisp, a little clean, medium bodied with a medium amount of carbonation. The mouthfeel is good and works well with this beer.

Overall I thought this was a good beer and a good example of the style. it had everything that I look for in an IPA and all the different aspects worked well with each other. This beer had nice drinkability, I could drink a couple of them. What I like the most about this beer is the hop profile, it's pretty good. What I like the least about this beer is nothing, there isn't anything that I dislike or would change. I would buy this beer again and I will for sure get it again if they release it next year. I would recommend trying this beer if you like IPA's. All in all I was happy with this beer, it was just a tasty IPA. It's not a favorite Shorts beer and it's above average for the style. Good job guys, this is a tasty IPA.