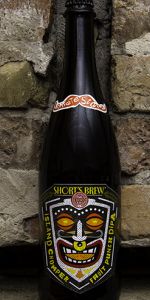 Appearance: pours a dull orange color. A 2 finger white head forms and quickly fades away. little to no lacing left behind. hazy and opaque.

Taste: opens up with a heap of fruit. ranges from tropical to stone and citrus. fruit taste also varies from sweet to bitter as well as tart. guava opens up after the tart taste and just a little bit of pine comes through near the end. taste is dominated by the fruit both from hops and real fruit.

Mouthfeel: strong combo if bitter and tart. lingering and sticky as well:

Overall: a very interesting IPA. there are some good flavors going on but some things just don't quite compliment each other. the mouthfeel also makes it a tough drink. good and unique but falls short of great.

Bottle received in a recent trade with mikeyson4, thanks man.

This one pours a golden orange, with a decent sized head, almost an inch, and lots of lacing.

This one smells incredibly juicy, but not in an IPA way, in more like an actual fruit juice way. The copious fruit additions seem to have completely masked any semblance of beer here, which is sad.

I feel like the addition of fruit honestly really hurt this one. It's not needed, because a well-hopped and brewed IPA might have pineapple, passion fruit, orange, papaya, apple, apricot or guava flavors anyway. Seriously, all that fruit? Is that necessary? The fruit flavor is strong but muddled, with a slightly unpleasant sour finish from the apricot, it seems.

This is well carbonated, with a very juicy mouthfeel. The sour finish is a turn off.

I'm really not sure about this one, I just don't think it worked.

I got a bottle of Short's Island Chomper that my friends picked up for me at the bottle release at Shorts. I'm really interested in trying this beer since I like their other fruited IPA's so lets see how it goes. 2015 Vintage. Poured from a brown 750ml bottle into a teku.

A- The label looks good, it's eye catching and it goes well with the name. It poured a hazy orange color that took on more of a red orange color when held to the light with two and half fingers worth of creamy and slightly bubbly off white head that died down to a thin ring that stayed till the end and it left some nice rings of lacing behind. This is a really nice looking beer, I have no complaints.

S- The aroma starts off with a lower amount of high sweetness with the fruits being the first to show up with tons of citrus and tropical fruit aromas that are nice and juicy and they are the highlight of the aroma. Up next comes a light alcohol aroma followed by the malts which impart a sweet malt aroma with a little bit of pale malts showing up. This beer has a great aroma I have no complaints.

T- The taste seems to be similar to the aroma and it starts off with a lower amount of high sweetness with the fruits still being the first to show up and they impart the same big citrus and tropical fruit like aroma that are nice and juicy and no single fruit sticks out the most. Up next comes a slightly bit of alcohol with a little bit of hops coming through. On the finish there's an even amount of bitter and sourness with a slightly grainy and big fruity aftertaste. This is a really nice tasting beer, I have no complaints.

M- Smooth, slightly boozy, a little crisp, a little refreshing, on the thicker side of being medium bodied with a slightly lower amount of medium carbonation. The mouthfeel is very nice and it works well with this beer.

Overall I thought this was a very nice beer and I thought it was a really nice example of the style, it had all the bitterness that I would expect from a Short's DIPA with a big punch of tropical fruits that bring a nice amount of sourness to the table and it reminds me a little of their Anniversary Ale. This beer has good drinkability, I won't have a problem drinking a full bottle and it's great for warm weather. What I like the most about this beer is the aroma, it's just great and I really like it. What I like the least about this beer is that the booze was just a little too noticeable. I would for sure buy this beer again if I had the chance and I would recommend it to anyone who likes fruity DIPA's. All in all I really enjoyed this beer, it had everything that I was hoping it did and it's like they took Anniversary Ale to the next level with more fruits. It's not a favorite Shorts beer, but it's up there as one of the better ones and it's a good example of a fruited DIPA. Great job guys, this was one tasty beer that lives up to it's name.