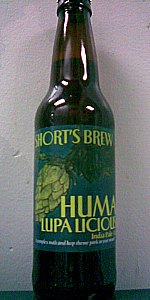 Notes: Named after the hop flower Humulus Lupulus, this India Pale Ale style beer has enormous amounts of hop bitterness, flavor and aroma. With a very complex malt bill, flavors seem to meld with the hops to balance this ale and provide a ridiculous urge to sample more.

Very solid beer we have here. Enjoying this one while up in MI on vacation. Pours a little dark for my liking but the foamy head is wonderful. Plenty of lacing too.

Aroma is a little subdued but contains a decent amount of hop aroma with a little alcohol.

The darkness concerned me that is may be too sweet and this is in the sweeter, grainy side. The flavor is wonderful though. Plenty of hop bitterness and tons of hop flavor.

All in all a really good beer. Glad I picked one up.

Pours light amber with a 1 1/2 inch white head, which lasts. Heavy lacing to the end.

Pours amber-gold with clarity and 2 fingers of creamy off-white head, with excellent retention, leaving nice, thick lace down the glass. Some grassy hops to start, but primarily big and lasting aromas of sweet stone and tropical fruits, which overwhelm the caramel malt aromas that must be there. Begins crisp, setting up sweet stone and tropical fruits, and then big caramel malt, before a dry, bitter, and even noticeably alcoholic finish.

-clear deep amber can pour with a 2 cm cap of sticky foam.
The aroma is earthy-woody.
The flavor includes bready malt, orange marmalade, and grapefruit zest. The hop bitterness is moderate.
There is a lot of flavor. Earthy hop aspects persist in the finish.

From a 12 oz bottle (2nd of a sixer picked up while skiing in the UP, bottled 6 weeks ago) into a La Fin du Monde tulip, looks great, moderately filtered amber with a nice 2 finger head that reduces to 1/2 finger with fantastic retention and lacing. Very nice almost aggressive hoppiness, but not overdone: grapefruit, fresh pine, maybe a little spice and grassy/mintiness is hanging out in there, too...the malts are substantial and may actually be as interesting as the hops - lots of fresh bread and biscuit (kind of reminiscent of an English ipa), faint juicy caramel,and something more...maybe its the yeast? Lively and solid bitterness, solid body but not too heavy, a little dry at the end, even though my tongue is coated with hoppy oiliness.

Idk. I’ve now had two ipas from Shorts in the past two months, and I’ve enjoyed them both quite a bit, even though they’re a little bit all over the place. Somehow, they work for me and kind of hit a sweet spot. Though in its details it is quite different, it kind of reminds me of Surly’s Furious, which I also love...a bit of an oddball that doesn’t fit into the WC/NE/EC divides...just kind of its own thing that is well balanced and still big and bold in very satisfying ways. Glad I’ve got four more in the fridge.

Right out of the can i was immediately impressed - dark orange to light gradient coloration, all of it topped off with a very creamy looking head that had good lacing down the glass. The smell was a nice balance of citrus intermingled with hoppy bitterness. Mouthfeel was well carbonated, though astringent to my tongue, and the taste didn't separate itself from other IPAs. Mind you, it's good, just not special. Overall, I still highly rated it and I'm sure there are many on here that find this their go-to IPA.

First time on this one and while certainly decent it does not leave me with anything that I can say is great about it. Probably could use some more zing from the hops. Not bad, not special to me

Review is for a 1/6 barrel keg I got from shorts. 100% Co2 @ 9 psi. Was tapped for 2 days. Keg temperature was 34F. Coupler, beerline and faucet were cleaned and sterilized. Filled 4 growlers for a weekend trip. Beer tasted wonderful 2 days after fill of growlers.

12 fl oz pull-tab can nabbed at a beer store in Northeastern Colorado as part of a sixer. Blue label with green label art and lime green text.

TASTE: Matches the aroma. I don't love the hop profile and it's a bit imbalanced (too sweet up front and too bitter on the back end) but it's enjoyable for what it is despite its flaws.

TEXTURE: Dry on the finish. Unrefreshing as a result. Coarse throughout. Well-carbonated. Medium-bodied.

OVERALL: I'd like to try this fresh on-draught. I don't love its orange marmalade sweetness coupled with its restrained pine, but I bet it's much better fresh given the beer's high reputation. Definitely one I'll try again, but my impression from this can isn't strong.

From a 12 oz can. Very underwhelming for me, I had been wanting to try this for a couple years. Maybe I got a bad batch of cans. The taste just did not do it for me. Nothing screamed flavorful ipa to me. Very malty and very bready and the bitterness just seemed to show up in the wrong way. Other than that, the look was dark amber throughout with about an inch and a half of head (head retention seemed to last forever). The mouth feel had that great medium body ipa feel, lovely. I just feel some things were off with the taste!

12oz bottle courtesy of Whyteboar. My 1st from Short's, a brewery I've long wanted to try beers from. Bottled on December 17, 2019 per the stamp on the neck, which was visible only once the bottle was empty. Come on, guys, put it on the label where we can see it and potentially avoid it if it's too old to give your brewery credit! This is why I hesitate to send Breakside IPAs to people despite them being great when fresh.//End rant.

Poured into a shaker pint glass, this was a fairly hazy, dark shade of amber, with a decent sized beige head. Decent lace.

Not a particularly dominant nose, but that may be due to age, plus the fact that it's almost certainly going to be a more Midwest approach to the style, which tends to be maltier, mellower and more sessionable in my experience than the West Coast hop bombs I often ingest. Mildly citrusy and piney, with a little bit of herbal bitterness and some bready malt notes.

More assertive in the taste than in the smell, but it's not a flavor bomb. Again, this could be in part due to age. Seems like it could be a good sessioner, if not for the 7.7% abv. I'd almost classify it at a DIPA for that reason alone. There's no trace of that rather high abv in the taste, which, like the nose, emphasises mildly citrusy notes, along with a grassy herbal hop note about midway through. Fairly large malt backbone to this, as I expected, when compared to a west coast IPA that dates back as far as this one does.

A bit past it's prime, but not debilitatingly so. I wouldn't call it spectacular, but it's a nice Midwest IPA that I'd happily drink several of in a bar in northern Michigan that I could walk from rather than drive. Thanks, Craig!

Look - Pours a thick and dense off-white head that clings to the glass and leaves tons of lacing. Slightly cloudy, golden amber color with a good amount of streaming bubbles. 5/5
Smell - The scent is very malty, like a toasted malt. Also getting some pine, citrus and floral aromas . 4.5/5
Taste - Taste follows the nose, very bready, with a slight bitterness in the aftertaste. Can't taste the alcohol. 4.5/5
Feel - Medium bodied with a sharp and crisp mouthfeel and finishes somewhat dry. 4.5/5
Overall - Very malt-forward and absolutely crushable. 4.5/5

Rating from notes. Consumed February 2014. "A bad ass, tasty hop bomb that's just a pleasure to drink. Definitely one of the best IPAs from the Midwest. More please."

Single picked up at Trader Joe’s in Kalamazoo, MI.
Pours a clear deep golden pushing to copper colour with 2 fingers creamy off white head with nice lacing.
Aroma initially piney hoppy on the head but then a straight up mango bomb of sweetness, orange notes.
Tastes of caramel malt, citrus, mango, grapefruit pith and building piney bitterness.
Full bodied beer with a sticky bitter sweetness and lingering bitter pine that sits on the palate long past any liquid in the glass.
Great classic west coast IPA.

12 oz. can.
Canned 09/21/2019.
Moderate pour yields a one inch white head over a bright golden-copper body with sticky lacing. Nose of pine and citrus. Taste mirrors nose with the pine taking over right through the finish of pine bitterness. Nice feel and overall, a definite taste bud scraper and would have another. Cheers to this Michigan brewery on a solid IPA and my first ever offering from them!

Pours a deep amber colour with one finger of head. Smell is primarily hoppy, with a little bit of citrus. Taste is mostly the same, with the hop burst coming more to the forefront. Gets easier to drink with each sip, but there aren't really any new flavours coming through even after giving it time to warm up. Maybe a touch of spicy. This beer feels like only a portion of what it could be, i might just not be jiving with this particular take on an IPA.

The sum is greater than the parts. A 12oz. can W/O date, drink ASAP, I guess.
Pours a honey hued amber, nice head w/ good lacing. Aroma, citrusy, faint honey.
Taste is hopalicious, bitterness causes my tongue to dance, I think that my tastebuds were laughing. Mouthfeel, smooth at first, then the hops kick in, very sneaky. Aftertaste is one of a good memory of a beer I just tasted moments ago. Liked it.

There is no date on the can. The pour is similar to the look of clover honey in a shaker pint glass. It's not an aggressive IPA, it reminds me more of an east coast style rather than a danky west coast style. The malts are undoubtedly present here & a little bit of pine as well. This is quite a tasty IPA it almost has an iced tea type of vibe going on & there is a small amount of bitterness left on the palate. Cheers! A-