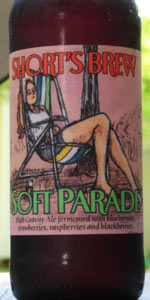 Notes: Soft Parade is a Fruit Rye Ale brewed with rye flakes and loaded with pureed strawberries, blueberries, raspberries and blackberries. The rose colored ale has aromas of ripe strawberries and grain. With flavors of fresh berries and rye, Soft Parade finishes dry and eminently drinkable.

Soft Parade was originally developed because Joe Short wanted to create a beer that incorporated a medley of berries, had a great color, and appealed to wine drinkers. The name Soft Parade stemmed from two moments in Joe Short’s life. First, because Joe worked as a brewer at the Traverse Brewing Company and The Doors album, The Soft Parade, played every day at the end of the brew shift. The second moment occurred when Joe was driving by himself, flipping through CD’s in his car, and came across The Soft Parade album again. At the time, The Soft Parade beer had not been named and it dawned on Joe that the medley of fruit infusing into the golden beer reminded him of a soft parade. That day the beer was named!

Picked this up on a whim, trying a couple Shorts offerings when first seeing them at my local bottle shop. Didn't realize this was specifically brewed "for those ladies who like their wine."

Unfortunately, it has a strong burnt-toast (more like a burnt hotdog bun) aroma with only some faint mixed berry behind it. Thought maybe I was having a stroke, but no, it's only when sniffing the beer that I get that. Had my daughter take a whiff, and, unprompted, she said "burnt garbage and ginger." She doesn't have the trained nose I do, but kids' senses are supposed to be sharper.

The taste is the same as the nose. Nothing else to say there. It's got a very thin-bodied, watery mouthfeel, with the burnt bun flavor lingering into the aftertaste.

Overall, I'd say stick with the wine, ladies.

My wife has been trying to develop our future daughter-in-law's extremely limited love for beer, and I suggested she might like Soft Parade. D-i-l seemed dubious but shortly later asked if there just might be another bottle? "Fridge in the patio bar," I said, and she went off to bed happy (and just a bit goofy) after spending two hours cleaning it out. Anything capable of such a Damascene conversion deserves to be rated as a cross-the-board score. Lovely fizzy magenta pink with a smell of berries and a taste and feel just sour and crisp enough to remind you that you're still a real adult. Yup -- this guy likes it, too.

When I first had one, I was dazzled by the taste and the ABV. The fruitness is good, but as some have said, the taste can get old after awhile. While it tastes "fruity", there isn't really one distinctive identifiable fruit taste. The alcohol taste is so obscured by this fruitiness that in no short time, you've downed two or three soft parade's and are teetering around in front of a group of 50 mostly strangers singing an Ace of Bass song for Karaoke night (even though it's not actually karaoke night).

Bottle dated 5/14/15 at 42 degrees into snifter
$ 1.89/12 oz bottle at the Lager Mill
Aroma of raspberries
Head small, fizzy, essentially lasting until the completion of the pour
Lacing – none
Body reddish, cloudy
Flavor like Kool Aid – sweet, fruity, and cheap like a stereotypic Castro Street whore, ends tasting like plastic; no hops, no malt, no alcohol, unfortunately no diacetyl, nothing resembling beer and the Doors should sue for for use of the name.
Palate medium, syrupy, lively carbonation

I pretty much always dig on beers that are this shade of fruit juice, just looks cool and unconventional to your non neckbeard. Also makes BMC dudes proclaim you're a sissy boy, which is fun in and of itself.

Anyways, pink hue, soft, 1/5" head, off white in color. Aroma of berries. I dig the rye usage, seems to give the beer a bit more heft than just a barley beer, makes it hold a manly edge to all the sweet fruits. Some tartness not in a spontaneous fermentation way, but in a fruit that isn't overly sweet and has that tart berry skin thing going on.

In no way you could call this beer, the closet thing to that is a product that was put out by Oliver wine in Indiana. That product was never labeled a beer, but a wine. If you are a fan of a very dry wine you might like this, but I did not. I thought it might at least a little sweet, nope.

Recently started getting Shorts in the Chicago market. So much hype. Picked this up in a mixed 6 pack. Glad I only have one of these. Aroma is sickly sweet strawberry. Taste... Imagine Leinenkugels Berry Weisse as a malt liquor... Not good.

Bottled on 2/24/16. 12oz bottle poured into a snifter. Pours a ruby red with a white head that fades leaving decent retention and lacing. The aromas are nice. Lots of strawberries and blueberries. Malts are there with a touch of wheat. The flavors have a nice blend of berries. You name a berry and I'm sure it's present. It's sweet, but definitely not cloying. It has also has a subtle earthy bitterness to it. Alcohol goes unnoticed. Mouthfeel is medium-bodied with moderate carbonation. It's thin and smooth. Dangerously drinkable.

This was a pleasant surprise. I'm usually not the biggest fan of "fruit beers", but this one is very enjoyable. This would really hit the spot during the hot weather. I really like this one. Well done.

Thanks to bgramer for my first Short's beer. Cheers dude!

Pours a vibrant ruby red with a little white head that lasts for a few minutes and doesn't leave much lacing.

Smells absolutely amazing for a fruit beer. Tons of fresh amazing fruit smells, dominated by strawberries for me. There is a slight bit of spiciness from the rye but the smell is definitely fruit dominated.

The taste is a 100% reversal. It tastes like a hearty rye bread with some slight fruit sweetness and a relatively dry and bitter finish. Really interesting to have such a 180 flavor turn like that.

Wow, no one could convince me that this was 9% ABV this is just hidden so well and its one of the best fruit beers I have ever had not to mention being extremely interesting. Thanks again Brendan!

Thanks a bunch to markwise, he sent this as an extra in our trade.

Pours amber with a pinkish hue, with lots of clarity and zero bubbling from the bottom of the glass. The head is very plentiful, with three fingers generated by a soft sideways pours from a low height. Very, very pillowy, cloudy head with its own pinkish appearance, though not as striking as the body of the beer. Dissipates at a slow rate to a half-finger cap that stays for the duration of the beer; leaves a good amount of spotty lace.

Nose is berries, and lots of them. Raspberries come out the most to me, with the seeds being a pungent and specific scent, but I can catch the unique blackberries in it too. Blueberries and strawberries are mentioned on the bottle, but I guess in the nose they offer just a bit of backing to the other two main players. Not a sniff of anything except fruit, and thankfully the fruit is really good.

Taste adds a healthy rye element that I'm a huge sucker for; the little tinge of spice and unique flavors of rye beers just add a lot to almost any kind of beer in my opinion, and that was before this beer. Fruit does hold the reigns and call the shots for the duration of the beer though, and strawberries and blueberries come out more here. The beer isn't sour at all, with a touch of tartness being ironed out by the malt backbone. This is a very tasty beer, and I wish I had more. Cideresque.

Mouthfeel is crisp but not thin, and carbonation is surprisingly not very high. The weight is just right and the finish is neutral thanks to the malts. Just a bit of tingling on the tongue from carbonation/fruit is a nice touch. Drinkability is through the roof; who doesn't like fresh fruit? It isn't too sweet in my opinion either. Really great beer in my estimation.

This beer pours a muddied, dark dark crimson in color with no head. It looks great and is ultimately cloudy and looks delicious. It smells like strawberry jam. I love it. I've never smelled anything quite like this one. I especially like the aromas because it's unique but it is exceptionally sweet as far as aromas are concerned. The flavor is far too subtle. I expected much more from this. It looks spectacular and smells amazing yet it leaves you scratching your head with the flavor. It could've been so much more! It has FOUR berries! Heavily feature one of them please! Instead it's like a watered down version of Rubaeus. It drinks smoothly and has good carbonation but is a little too flat. This beer sounds great but drinks into mediocrity.

Perfect beer for your wine/wine cooler drinking wife. Personally I will pass.