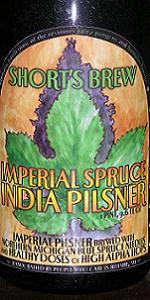 Keeping this short and sweet. Best beer I've ever tasted so far...

Pours a clear straw yellow with a thick 2 inch head of white foam (nice retention and heavy lacing). Smell is pine and bread-y malt, with a bit of grass and earth. Taste is overwhelmingly piney with a bit of bread-y malt and grass. Mouth feel is moderate with a moderate to light body. Overall a fantastic beer if you want something super piney.

12 ounce bottle into pilsener glass, bottled 6/14/2012. Pours hazy golden straw color with a nice 1-2 finger fairly dense white head with very good retention, that reduces to a nice cap that lingers. Good spotty lacing clings down the glass as you drink; with a fair amount of carbonation streaming up. Aromas of lemon, citrus peel, grapefruit, bread, herbal, floral, spruce, pine, grass, and earthiness. Very nice aromas that are extremely unique; and have great balance with a nice hop profile as well. Taste of big orange, pine, grapefruit, lemon, pepper, spruce, floral, earth, and big herbal spiciness. Nice amount of pine bitterness on the finish; with lingering notes of orange, grapefruit, lemon, pine, spruce, floral, earth, and herbal spiciness on the finish for a while. Great bitterness and hop flavor balance with the malt profile; with good complexity. Medium carbonation and body; with a nice fairly creamy and slightly sticky mouthfeel. Alcohol is very well hidden with only a slight warming noticed after the finish. Overall this is a very excellent and unique imperial pilsner. Great hop profile and balance; and extremely easy to drink. Highly enjoyable.

Golden hue, glows in the glass. Whispy white head appears and fades to lace. Aromas are very piney. Good hop presence and the spruce wafts in and out. Flavor is very nice, very bitter and foresty. The spruce is nicely integrated, the massive hops carry it through and there is enough base malt to give a slight balance to it. Definitely hop forward but nicely done. Definitely the best spruce beer I've had.

This is probably my favorite offering from Shorts, so it is about time I wrote a review. My two cents, I wish this was the summer seasonal and available the whole summer.

Appearance - Poured into a pint glass, the beer was a handsome golden color with a modest white head. The bubbles were fairly large and clung to the sides of the glass.

Smell - The spruce really shines in the aroma and I love it. It comes through like a really good gin.

Taste - The sour of the spruce jumps through in the initial taste. It really is a little like beer with gin notes. Gentle hop action occur with the background, melting nicely with the sourness of the spruce. The finish is clean and dry.

Mouthfeel - Recalling that this is an imperial pilsner, it runs a little thicker. The sour notes linger nicely in the back of the throat.

Overall - I usually grab a couple of sixers of this one to get me through the year. I would highly recommend cracking open a bottle with some Indian food.

Have you ever put a bit of spruce sap right in your mouth to see how it tastes? Having spent a lot of time in the woods I have done this on many occasions, cause I like the taste. I cant say the same of this beer.

The beer pours a nice golden color with a thin head of white bubbles. Pure spruce in the nose, with just a hint of hops and sweet malt. This has all the apperence of a beer, but almost none of the taste. Like eating spruce sap right from the tree. Way too much spruce for me. I drank half of my half of the bottle and topped off my glass with whatever pale ale I was drinking, and that was about as much spruce as I wanted in this beer. I was looking forward to trying this (as I do alot of Shorts beers), and was dissapointed (as I am with a lot of Shorts beers).

A- This one is a medium to dark gold in appearance with about a solid inch of off colored foam head that sticks around with plenty of lacing.

TM- This one is really bitter and has a bite all the way through. The pine needle taste is overwhelmingly the dominant flavor, with hops and citrus nodes making an appearance throughout as well. This one leaves the palate feeling extremely tangy and dry.

Overall, this is a hophead or spruce lovers dream! Very memorable and unique enough that one is not quick to forget it. Overall, a very solid beer and very indicative of the style.

Pours a light hazy golden wheat color with a one finger off-white head.

Nose is a pungent overripe mango blast, with slight pine and lemon notes.

Taste is very piney, juicy and peppery with hints of barn funk and strong bitterness.

Mouthfeel is slightly syrupy, with medium to low carbonation.

Overall a very very interesting beer - I have never had anything like it. Hard to drink a whole pint, but enjoyable in small amounts.

Very strong pine taste, which i like. Yards brewery makes a spruce amber which is also good but tame in comparison. A good beer to share if your friends have an open mind and a broad palate.

Poured from a bottle to a nice English Man United pint glass!! It pours bright golden brown with a really nice foamy wwhite 3 finger that leaves a nice cloudy lacing throughout the glass and drink.

Instant spruce and pines hops from first whiff to last taste. This is really almost similar to a robust IPA, slightly like double crooked tree, but a little more intense and less grassy flavors and much more hops and spruce pine needles! Damn, its really throughout the entirety of the brew, those spruce needles and pines, but really well done and balanced on the background of the malt of the pilsner, which is just the right blend and balance to create this substantiallly great beer. There are nice hop overtures throughout which blends and adds to the beer with some bitterness and spice. I get some brassiness taste to the brew but not an offtaste which just adds to the drink; and a small hint of citrus, mainly grapefruit. Most of the flavors tasted here are also detectable through the nose and initial smell.

(I know this isn't an IPA, however, this imperial pilsner is similar and delicious, and BOLD)
Cheers!!

A- There's a strong resemblence to lemon juice in the appearance. The only thing that ruins that is the slight film of head. No lacing is there to be found.

S- The aroma is quite strong. I could imagine finding this scent in a cleaning chemical. It smells crisp and nice, but the furthest thing from natural.

T- There is a ton of spruce in this, especially in the beginning. Imagine the taste of spruce and concentrate it. It's not subtle. The hops come out soon after as the spruce slowly fades. The drink is far closer in style to a IPA than a pilsner, but I can't say I've ever had an imperial pilsner before.

There's some biscuit malt as well as hints of caramel. The drink maintains a good amount of bitterness throughout.

M- Medium full with a dry stickiness from the hops that comes out immediately. It's somewhat rough as it goes down, but since it sticks around, the flavor lasts a bit longer. Fair enough tradeoff.

O- Yet another interesting beer from Shorts. I don't think I'd buy this one again, but I'm glad that I did try it. I would be curious how it would mix with other beers though, to perhaps round it out a little bit. This may actually be what I consider one of Shorts stranger brews, and that's saying something. Buying a single rather than a 6pk is highly recommended.

poured into a tulip

Slightly hazy pale gold color which a huge amouth of pillowy white head. Great lacing going on the sides of the glass as the head dissipates. A nice looking pilsner!

Nose is freshly picked spruce ends with a little bit of lemon and menthol (like some vick's vapor rub). A slight booze presence is noticeable as well. I was expecting a bottle of pine-sol but it smells like you're in a pine forest. Surprisingly enjoyable nose.

Here is the Pine-sol I was expecting. Some pale malts right up front with a huge overpowering pine solvent taste afterwards. Literally like someone added a few drops of Pine-Sol to your normal Imperial Pilsner. Bitterness is pretty much from start to finish and the pine-sol lingers around for what seems like eternity.

Medium bodied with great carbonation with a slightly dry finish.

Wackiest beer I've had from Short's. There are parts that are enjoyable to this beer but the taste is a little too much to enjoy more than a bottle. I recommend people to seek this out however because of the novelty/craziness of it. Obviously there are many people that enjoy it given the A- grade here on BA. I wouldn't turn down a pour/bottle of this but doubt I'll seek it out.

Bought a 6 pack of this at the brewpub after having the 9.3% version on tap. It is simply terrific, with the spruce and hops combining to make this taste like an IPA.