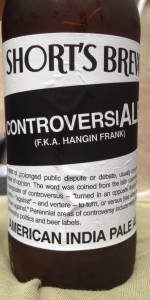 Notes: Loaded with hops like an IPA, yet drinks like a Pale Ale, we simply decided to call it a Strong Pale Ale. The fragrant, earthy citrus laced nose is instantly detectable. Large amounts of toasted grains and high alpha Simcoe hops form a perfect union that creates the cool sensation of toasted sourdough covered with zesty grapefruit hop marmalade.

i guess its cool that shorts is selling some beer in colorado now, but there has to be some quality control. i bought this on a whim, excited to see it on the shelf, and i made the mistake of not checking the date first, its was old and really not very good at all, i have no idea what it might have tasted like fresh, because the hops were so eroded here that this was more malty than anything else, a bit oxidized, cheap and sort of wonky tasting, some english malt and just a shadow of citrus from what was simcoe hop robustness. i get some graham cracker bready sweetness, a little bitter orange, and an ever so slightly doughy yeast element. i can easily see how the bigger malt element than is trendy these days would be needed for balance in a beer as potentially assertive on the hop side as this, but now its just some bitterness, some oily aspect to the mouthfeel, and the still fading citrus character, maybe a little grapefruit to it. i though this was a bust at this point, most hoppy beer would be at close to half a year old, but ive been burned by shorts a few times now and am frustrated by this. maybe ill skip the next one i see. some blame has to be on the store or distributor too i guess. still, id like to try this fresh, when they hit they really hit, but its been awhile for me now...

I really liked this one - crisp, bracing, easy to drink, tasty, smooth. Another great beer from a great local brewery. Pours a slightly hazy amber-copper color with some foaming white head and spotty lingering lacing. Smells of some juicy ripe citrus zest hops, some weaker floral hops and malt. Tastes of lots of fruity zest hops - orange, tangerine, mango, grapefruit, pineapple, lemon - as well as some malt, vanilla, bread and weaker floral hops at the finish. Smooth, mild mouthfeel with some good bitter hoppiness at the end. Good amount of carbonation. Really an enjoyable beer, good flavors and would definitely enjoy more of these in the future!

Drinks like a typical IPA, I couldn't get any notes of citrus or tropical fruits. Fairly bitter for the IBU's, a run of the mill beer.
Pours a copper like color, moldy cloudy. Soft mouth feel, bitter aftertaste.

This is a great Michigan IPA. Piney, resinous, malty, smells almost like an amber ale, looks a beautiful deep amber in the glass, with nice clarity. Tastes great, easy drinker.

12oz bottled 2/20/18 (61 days ago) poured into a Spiegelau IPA glass at fridge temp, no ABV listed on label. The beer pours bright honey amber in color with khaki head. The head recedes to a cap and leaves plenty of lacing. The aroma is ambiguous stone fruit and a little caramel. The taste is a burnt sugar caramel presence throughout with a steady bitterness and light notes of citrus and earth. The mouthfeel is thin to medium bodied, adequately carbonated and dry in the finish. There is some residual hop oil stickiness, but no lingering sweetness. Overall, good. I would like to try this fresh, stored cold or on tap. My bottle was purchased a few days ago & warm. The bottles are dated in black ink that can only be read once the beer is poured.

So I am not sure if I am rating the correct beer or not because the label on my beer has what looks like a revamped 80s old school label on it and the beer is only listed as an India Pale Ale not and American, also I wouldn't doubt that this beer is indeed an American Pale Ale based on the way it tastes. Honestly, I am surprised this beer doesn't have better ratings than it does on this site. If I am trying to review the beer honestly it is comparable to a dulled down version of Two Hearted by Bell's. The sweetness note is less citrusy in my opinion and the finish is a lot less bitter (in my opinion that's a bad thing, but I could see this being a lot more palatable to the masses). The color is a deep amberish color and the beer seems to hold a nice head throughout drinking it. Definitely worth picking up a 6 pack, also just for reference the beer I am referring to has a black label with "orange", "green" and "pink" lettering on the bottle (but take that for what its worth from a color blind dude)

The appearance was a nice ruddy to golden orange to brown color with a one finger white foamy head that dies at a nice one minute pace. The smell was a bitter citrus hoppiness running about my nose. There were some light malts trying to come in. The taste was basically bitter but ended up allowing a decent sweet maltiness coming in here and there. The palate had a decent sessionability about it but it did also have a nice carbonation that wasn’t too harsh nor wasn’t too light for an AIPA. Overall, in my opinion, this was a good AIPA well worthy of having again.

A rough pour yielded a big eggshell head; a curtain of frothy lace.

Peanut butter & mild caramel flavors up front; a faint, dry grapefruit bite on the finish. Below average American barleywine vibes here; drinkable but little else. I've had my last.

This beer Seems a bit weak as an IPA, and the hops are a little bitter. Most interesting is a nutty taste. It's a good beer - just with a bitter aftertaste that's more than well balanced.

Poured from a bottle into a New Belgium tulip. The pour is burnt amber, hazy, and sports a half finger of off-white head. On the nose I get cedar, pine, and marmalade.

Medium-light body with a balanced flavor and a firm feel. Decent malt backbone provides ample sweetness. The hop profile is leafy and husky and a bit mild on the citrus notes for my tastes. It reminds me a lot of Sierra Nevada Pale Ale, but not quite as assertive.

My first beer from Shorts and it's a bit of a disappointment. Given what I've heard about this brewer, I thought I would like an IPA offering from them more than I did. It's not that there's anything particularly wrong with it, it just drinks more like a pale ale than an IPA.

My bro-in-law brought this to 4th July festivities. It poured an orangish with thin white head that is not leaving much of a lace. The scent has hints of pine. The taste is bitter with pine backdrop. The Mouthfeel is medium in body with good carbonation. Overall it's a good beer but has that common twang of most Shorts beer.