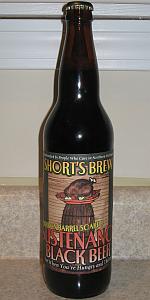 Been wanting to try this forever & when tectactoe tosses a bottle my way I inexplicably...leave it in the fridge for six weeks, or something. The mysterious ways of the mind. 12 oz. bottle sipped with a good brat, & afterwards.

Poured, the beer lives up to it Deutsch billing; black, though red around the edges & as the volume in the glass falls. Carbonation is fair to middlin'. Nose is heavy on the bourbon, with soft backups of roast & malts. Bourbon rules the roost here.

Bourbon Barrel Sustenance would be welcome in my water skin if I was wandering the depths of Mirkwood. Or Chicago. The brew is driven by the barrel, to the point that this could be a barrel-aged Dicktbier & it might not be much different. Fair dip of chocolate in the middle bracketed by oak, coconut (maybe?), vanilla. Bourbon takes control on the end, though it's been lined with chocolate. Plenty OK. Creamy; akin to a milk stout, almost. I'm sipping this like it comes with an expiration minute.

I'm not going to knife anyone for another bottle, but I'm seriously enjoying it. If the world were fair, it would get bonus points for being a relatively low ABV barrel-aged beer. Very good.

Thanks to Jeff for picking me up a sixer of this at the brewery. Not sure exactly what is meant by Bourbon Barrel "Soaked", rather than "Aged", but I'll never turn down a Shorts brew. This one pours a dark brown color, kind of thin and a bit lighter looking compared to what I had imagined in my mind. Almost no head at first, but it gracefully forms seconds after I finish pouring - tan in color, big-bubbled, and lightly creamy. No lace on the glass, but the beer leaves some wet legging when swirled.

One thing's for sure - the aroma on BB Sustenance is much more robust than its appearance might have you believe. It comes out swinging with a huge barrel presence - bourbon is perhaps the strongest peripheral, following closely by a large amount of smooth and sweet vanilla. Some mild oaky, woody, and nutty aromas lay beneath those, creating a beer that smells not too far off of sticking your head inside of an old bourbon barrel. Upon warming, more roasted malts and sweet chocolate notes jump out, too - this beer smells great.

One sip and you're immediately assulted by a great deal of booze; the bourbon hits hard, almost coming off as more of a raw, whiskey flavor. Once the initial shock of the bourbon subsides, other flavors that come out include a soft-spoken mix of cola, oak, roast, and some vanilla - sadly in much lower capacity than was found in the aroma. Lots of chocolate and cocoa powder comes crashing in about halfway through and hangs around for the aftertaste. Especially when this puppy warms up, the semi-sweet cocoa becomes a big proponent in the finish.

The mouth feel on BB Sustenance is slick and wet, but it has a slight creaminess to it that keeps it feeling smooth and refreshing on the palate. Carbonation is pretty low, but it really isn't much of a bother. I guess when I hear "Bourbon Barrel" in front of a beer, I'm expecting some thick, viscous, chewy-ass liquid, but that's simply not the case. Schwarzbiers typically are not thick, and so it shouldn't be too much of a concern that BB Sustenance isn't, either, save for the barrel-induced creaminess.

It's hard to believe this beer is only 6.5% ABV - the bourbon character is very strong and very forward. It starts strong and finishs strong, leaving a warmth that engulfs your throat and even the upper-half of your chest after each swallow. Not so much robust as it is unabashedly powerful; while I still enjoyed the beer, some time in the cellar might provide a smoother flavor profile with a slightly toned down alcohol assault. Fresh, this one's a slow sipper. Shorts wasn't too far off with their slogan for this one - "for when you're hungry and thirsty".

12 oz. bottle from Nachos4two, Thanks!

Pours dark brown almost black with finger of head that shrinks rather quickly. Smell is a big punch of sweet bourbon with a little bit of chocolate. Wow is that bourbony. Taste follows the nose with a big bourbon presence with a slightly boozy taste. The beer is rather thin but surprising amounts of carbonation. Overall, a beer unlike any I've had. Not an incredible beer but definitely one of a kind and worth a try. Wouldn't mind drinking this frequently.

12oz bottle from the most recent 2013 release (no bottle date), generously given to me by fellow BA Benish. Poured into an unlabeled snifter today, 9/1/2013.

Pours a dark black, opaque body with a 1cm brown head that dissipates into a fairly thick brown collar. Not much lacing to speak of. Very dark looking brew.

Smells like sweet bourbon. Not much smoke or roastiness at all here. A bit of earthiness in the background.. must be the hops. But pretty much a sweet nose here. Not much oak or vanilla- just that sweet bourbon, a bit of chocolate and just a wee bit of roast malts.

Tastes like sweet bourbon mixed in with some caramel and toffee. Tasty brew that kind of reminds me of Jack and Coke, to be honest. Not much vanilla or oak here which I would have expected from a bourbon barrel beer, even if they call it "soaked" on the label. Interesting, pleasant, not super complex but tasty.

Mouthfeel on this is medium bodied, good carbonation. Its a bit slick and resinous, covers my tongue in sweet bourbon flavour. It's surprisingly low ABV which I don't get, with all that sweet bourbon! I guess this is part of the charm here. At the same time its a bit of a sipper just because of that flavour... you sip bourbon, right?

Interesting beer. Not meant to be compared to say, Bourbon County Stout or anything like that, but on its own this is an interesting, flavourful beer. I enjoyed it, and I recommend it to anyone who likes a lighter beer with some bourbon flavour in it. It holds up well surprisingly despite the relatively thin body and malt presence.

Mouthfeel: very light. A little bit of lager aspect to it.

Overall: a nice light bourbon barrel beer. Pretty light and nicely simple. Some lager aspects to it in taste and feel. I'd say it's a strong bourbon tasting beer with very little others tastes and very low other character.