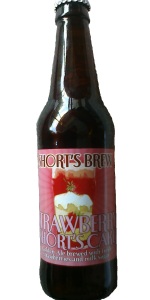 Notes: Strawberry Short’s Cake is a Golden Ale brewed with the addition of strawberries and milk sugar. The flavors of shortcake and fresh strawberries transform this beer into rose-colored party nectar that is pleasingly sweet with hints of cream. Biscuit flavors and aromas arise from the use of large amounts of Victory malt.
View: Beers | Place Reviews
Reviews: 171 | Ratings: 559 | Log in to view all ratings and sort
Reviews by woodychandler:

When it was announced that Short's Brewing was going to be getting distro into PA, my heart went pitty-pat! I have known these guys since the early part of the century when they were coming to the BeerAdvocate fests at the Cyclorama. I have embroidered cloth patches from them & sport them proudly on my vests & jackets. We did not get everything from them, initially, but as time has passed, so has the depth and breadth of what they are sending us increased. Accordingly, I am trying to keep up with their releases.

From the bottle: "Golden Ale brewed with fresh strawberries and milk sugar".

This has to be among my all-time favorite beers from Short's! This and Soft Parade, both fruit beers, which may seem odd, coming from this self-avowed, self-described hophead. Strawberries & I go back to my wee childhood, when I was one of the only freckle-faced children in my Nursery class & I was a bit of a curiosity. As it turned out, the other freckled classmate was a flame-haired cutie who became my first girlfriend. We became inseparable and held hands and walked side-by-side, while our classmates had to line up. There was some initial concern, but soon the entire school was abuzz about "The Little Couple". I was heartbroken when she moved away after our first grade year. How does this relate to strawberries? Back then, Funny Face drink mix (https://www.bing.com/images/search?q=funny%20face%20drink%20mix&qs=IM&form=QBIR&pq=funny%20face%20drink&sc=8-16&sp=1&sk= )
was the rage & I had a book about the characters, including Freckle-Faced Strawberry, who became our hero! To this day, I have an unabashed fetish for redheads and have written an (as-yet) unpublished children's book about a strawberry.

Onward! It is time to Pop! the cap on this Cake & have some Strawberry. I let fly in my excitement and produced two fingers of foamy, fizzy, tawny head with limited retention. Color was a slightly-hazy Coppery-Brown (SRM = > 17, < 22), but with a slightly reddish tint. Nose was redolent with strawberries, so fair dinkum for truth in advertising! Mouthfeel was thin-to-medium, not watery, but nothing notable. I liked the way the taste was not wildly sweet, but still allowed for the strawberry taste to be in the forefront. The milk sugar gave it a creamy, vanilla-like sweetness and by closing my eyes, I could taste my late-paternal grandmother's signature strawberry shortcake. Oh my! No wonder I have always enjoyed this beer in the past. Finish was sweet, but not cloying or over the top. Instead, it left me longing for summer and the return of fresh strawberries. Would I drink it again? Unquestionably, without hesitation!

Bottle received as an extra.

Pours a jammy looking red, not very dark, or very light, right in the middle. There's a half inch head, with a small amount of lacing.

Smells quite like fresh strawberries, they translated the flavor pretty well. I am also picking up some vanilla.

The taste is similar. The wonderful fresh strawberry flavor, like sweet jam, is the overwhelming flavor, but I am getting some vanilla flavor that brings whipped cream to mind. I am not getting a whole lot "cake" flavor, however. This is really one-note, but luckily, I like that note.

This one is fairly light bodied, with a sweet, slightly sticky mouthfeel, and a lower level of carbonation. I'm glad the carbonation is lower, or this might have approached fruit soda territory.

A very interesting and tasty beer from Short's, a great fruit beer.

Awesome extra in a recent trade. My first ever short's brew

Pours deep clear red with almost no head. Smell is strawberries with some slight medicinal hints. Tastes much better than it smels strawberry comes through on the first sip that leads into a delicious pound cake like sweet malt taste. Carbonation is on the lower side and mouthfeel is faurly light. Overall I think they got what they were aiming for with the taste on this one, pretty good but not really something I could drink that much of.

Appearance of strawberry puree and golden ale mixed together. 1/2 finger of slick head.

Well, this smells like a PB&J sandwich (strawberry jam of course). Spot on. I know that's not what they were going for, but impressive nonetheless.

Flavors of strawberry jam, white bread, golden malts, and a slight dirt quality. (whatever you do, don't drink this from the bottle)

Feel is light to medium bodied, crisp, with mild carbonation.

Overall, I think if this were rebranded a PB&J Ale, it would do wonderfully. I didn't taste shortcake or any sort of dessert. I got total PB&J made with strawberry jam dropped on the playground.

overall: interesting beer. glad I got to try it. still nothing what I was expecting but atleast they try.

BBP from Canada (ON)

Pours copper with a very slight tinge of pink. The head is slightly lacking, but the lacing is nice.

The aroma is slightly fruity, and a ton of biscuit malt comes through. A creaminess manages to reveal itself as well.

The taste is quite true to the goal. I found that Short's Key Lime Pie was far too sweet, but this beer had much more moderation and balance. It has its share of sweetness, yet it doesn't overwhelm at all. The beer actually has a strong resemblance to strawberries, cake, and cream, and the only thing that keeps this from being perfect is how the cream flavor falls off a bit too fast.

The body is creamy and smooth. Carbonation is on par. The finish is dry and mildly sticky.

Overall, this was one of Short's successful attempts at not only replicating a flavor, but making it drinkable. Short's is just about always good for replicating flavors, but making them taste good is normally another story. Luckily this was a success, and a testament to their brewing abilities.

This one did nothing for me. And I'm a sucker for fruit flavored beer. There was plenty of strawberry in there, but whatever they used to aim for the "shortcake" piece did not work for me. There was simply any unpleasant aftertaste that turned me off. Shorts usually hits the mark, but not on this one

Poured from bottle into tulip. Bottled dated 7/14, it's now 4/15. This is the longest I've held onto one, usually drink them fresher (within a month of bottle date). Seems to make a difference, most of the fresher ones have a tartness to them, this one is sweet with very little tart. Not a bad thing at all, either way, but something I'm going to pay attention to later this year.
Pours a pinkish red, or reddish pink, with some fizzy head that dissipates quickly to nothing no lacing. Some floaties, always floaties in Short's cake. I let them settle, then swirl as I drink.
Smell is of strawberry jam. Pleasant, summery. Sweet, sugary, some graham cracker.
Taste is sweet berries, nothing artificial about it. Some bite on the back end for this session, usually it's a little more tart upfront, too.
One of my favorite fruit beers, always a must buy for me every summer, along with Key Lime pie.

Dessert in a glass. A beer I've never reviewed before and now have the chance thanks to mtomlins.

Pours a beautiful copper colour with a respectable head that has good retention. Aroma of pure strawberry syrup, with a malted barley crust. If smelled with eyes closed, could be surprised that there was no strawberry shortcake present. The flavour likewise has the best of the dessert elements, albeit in liquid form.

Not a beer in any traditional sense, but delivers very well on the promise of the name.

Strawberry Short's Cake from Short's Brewing Company
Beer rating: 83 out of 100 with 559 ratings