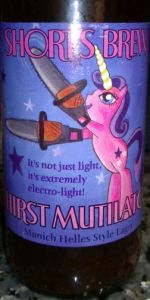 Thanks to CaptCleveland for this bottle which was lost in the Potter’s Field of my fridge for…a while. I wasn’t going to review it, but, well, it’s good! Sorry for the foreshadowing. 12 oz. unicorn-banded bottle.

The pour is murky orange, & still has some pop to it. The nose is nice lemon, Hawaiian Buns, with a lager yeast undercarriage. Doesn’t smell old or over the hill. And I know just what over the hill smells like.

Thirst Mutilator must have been a god-brewed beer, because this over two year old lager is still going strong. Lovely lemon right up front with the taste & none of the sharpness, buoyed up by the lager yeast, citrus, honey. Touch of organic crackers & slight hop bitterness right on the end. Crackling carbonation in the mouth adds another layer & hell, if there were lagers like this regularly available, I’d drink a hell of a lot more of them.

Hot damn, what a nice surprise, from expected drain pour to sipping on a very good beer. Short’s needs to train some other U.S. brewers how to make this a good lager!

I got to say I didn't expect much at all but this beer is very good possibly the best helles lager I have had in some time! The ABV is also stellar while most are 5-6% this one clocks in at 6.7 almost in IPA territory. Very smooth sweet grainy and surprisingly hoppy and can't beat the silly cover art of a pony with chainsaw arms!

I got a bottle of Short's Thirst Mutilator in their new fall variety pack last week for $18.99 at The Lager Mill. I'm in the mood for something on the lighter side tonight and I'm interested too see what Short's can do with Munich Helles Lager, so lets see how it goes. No visible bottling date. Poured from a brown 12oz bottle into a Short's imperial pint glass.

A- The label looks ridiculous and it's by far the weirdest label Short's has done, it's very eye catching. It poured a cloudy pale yellow color that took on more of a darker golden color when held to the light with two fingers worth of creamy white head that died down to a thin ring that stayed till the end and it a little bit of patchy lacing behind. This was a nice looking beer, but i thought it was a little cloudy for the style.

S- The aroma starts off with a lower amount of medium sweetness with the malts being the first to show up and it imparts some light sweet malt, cracker malt, grainy and bread crust like aroma with the cracker malts sticking out the most and there's a creamy aroma showing up in the background along with some clean lager yeast. Up next comes the malts which impart some earthy, grassy and slightly spicy hop aromas with no single aspect sticking out the most. This beer had a pretty nice aroma that seemed to be pretty true to style.

M- Smooth, crisp, clean, slightly prickly, on the light side of being medium bodied with a medium amount of carbonation. This beer had a good mouthfeel that worked well with it.

Overall I thought this was a nice beer and I thought it was a good example of the style, it seemed pretty true to style and it didn't have any off flavors at all, it had almost everything that I look for in the style. This beer had good drinkability, it was smooth, crisp, clean, slightly prickly, not too filling and that taste did a good job at holding my attention, I could drink more than a few of these especially when it's warm outside. What I like the most about this beer was the drinkability and mouthfeel, they are just what I want from the style. What I liked the least about this beer was the cloudy appearance and the fact that this came out in the fall and not the summer, it would be a great summertime beer. I would buy this beer again and if it was the summer I wouldn't mind being able to by this beer on it's own and in six packs. I would recommend this to anyone who likes the style or just easy drinking Lagers in general. All in all I was happy with this beer, except the cloudy color it had everything that I want out of a Munich Helles Lager and I enjoyed drinking it. It's not my favorite Short's beers, but it is one of the better Munich Helles Lager I've had. Nice job guys, this was a tasty Helles Lager, keep up the hard work.