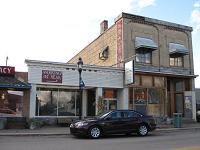 UPDATE Sept, 2015 - This was stop #5 on a 6-day pub crawl that would take my wife and me to the Brewers Guild UP Beer Fest and back. We've been to Short's a dozen times or more, so this is just an update about some observations that we made during our visit. I'm not going to ding the brewery for items 1 and 2, but I will slightly for item #3 in my rating.

#1 - It was a Thursday night stop, and the place was jammed. First time that we've ever experienced that. A music group was playing and there was no cover charge, so maybe that's part of it. Good for Short's to offer free live music, but don't let the place get so crowded that I have to wait to be seated.

#2 – The music group did not seem to be playing oldies, big band sound, etc. but we were guessing that half of the crowd that was there were gray-headed beer drinkers. Good for Short's to attract more types of crowds, but sadly, I felt out of place.

#3 – The beers on tap were woefully short of one-offs that I've always experienced in my past visits. I think only 3 of the available beers were something that had not been bottled before, thus because I buy everything that Short's puts into bottles, I was short on having new beer experiences.

But still, I'll keep coming back. This is my favorite Michigan brewery.

My wife and I stopped here as part of a pub crawl in northern Michigan and the UP to visit the newer brewpubs (plus several others) that have opened since our last trip ‘up north’. This place happens to be one of the ‘several others’. Although this is the first time I’ve reviewed this brewery, we’ve been here a few times before, and will be here again on our return trip from the UP later in the week. The place was not busy on a weekday night, and we could have sat at the bar, but we chose a small table near the bar. (On the return trip on a Saturday, they were packed, and had a band playing, so we had to ask someone to share a table.)

There is not much that hasn’t been said about this pub in the previous reviews, so I’ll merely state that the constant changing and addition of new beers every time that we come here, and how unusual many of them are, plus the ultimate grade of an A+ that we gave them for their quality is about all I need to say. We ordered food on both visits this week, and it also was very good (like it always has been on every previous visit).

Anyone who is looking for the perfect brewpub needs to come here. It’s well worth it even though it’s a little off of the beaten path, and we’ll be back again someday as always when we’re in the area.