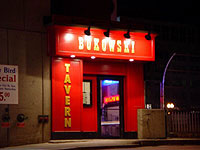 View: Place Reviews
Reviews: 124 | Ratings: 176 | Log in to view all ratings and sort
Reviews by TheLongBeachBum:

I arrived in Boston on the Friday afternoon, the day before BA Stammtisch, & made my way from the Airport over to the Sheraton Hotel where I was staying with fellow So.Cal. BA xlperro. Big Dog had already reckied the area like the consummate BA Professional he is. I was pleased to hear from him, that Bukowskis was just over the road from the Hotel.

Situated on the right hand side of a multistory concrete car park, & nearby a road bridge that forms part of a freeway overpass. From the outside, it's not exactly one of those places that grabs your attention, merely it rather intrigues.

Walking through an anti-room at the front, the entrance is dog-legged & leads into a long dimly lit hallway like room. It opens up from the darkness as you walk further down the wooden floored room. The Bar is to your left, a long dark wooden affair with some high stools.

The bar has a clump of taps in the middle, about 12-15, with some notables and PBR. These are accompanied by a lone Beer Engine which I immediately spied. Above the Bar there are 3 long rows of handled Glass Mugs hanging from hooks. Behind the bar, a good range of bottled beers sit in Ice Baths, the caps just poke above the surface. Opposite the long bar are a few Tables. Where the bar end a Kitchen begins, which in turn is where the long room goes up a level right at the end.

The first visit on the Friday night was for a dust-buster; both I & xlperro went for the Heavyweight Baltus served in what looked like a UK straight sided 1/2 Pint Glass. The service was cheerful & prompt, although it was relatively quiet I noted. We then headed out to the Anam Cara.

On our return after a skinful of great Ale at the Anam Cara pre-Stammtisch Bash, we entered a packed Bukowski's & sat at the back, chatted with some local women & said goodbye to Wonder Woman as we left for the Night.

A final visit on the Sunday Night after the Post-Stammtisch Party, & it was more laid-back, reasonably quiet, & the service less attentive. I was indecisive so I decided to try the Spin the Wheel & ended up with an Orval  the luck of the Bum strikes again. Service was proper but a bit slow, like the bartender had better things to do  which was surprising because it was quiet  but loud  if you know what I mean.

I never tried the food, but it's a good place to visit for a beer, or two, & it served us well as the 1st & last stops on the Friday. Not sure I would be too happy to spend all night here though.

definitely has a "dive bar" vibe - cash only, punk music playing, hipster bartender. The place is small, about 10 feet wide - fixed stools at the bar and just a few other tables. good tap list, and bottle list as well. bartender made some recommendations and was friendly. I had the peanut butter burger - it was decent.

They may be cash only... They may not have 80 taps... but if we're talking beer bars in Boston, this is my home away from home. I am a proud mug clubber (not subjective AT ALL) because I have been enamored with this place for over 10 years between the draft/bottle/can variety, the staff, the vibe and the proximity to "cool stuff" in town. The vibe doesn't get a 5, not because of the place itself but because of the central location of the bar, which sometimes attracts less sophisticated Beer Drinkers/super-clueless tourists (NOT BUK's fault). This is the first place I try and bring people if they're in Boston to visit and have enough time to check out a handful of beer bars vs. breweries/taprooms.

Well, this is a dive bar, pretty small, cash only and one of the stranger bathrroms i've seen. One room, with a lockable door, but both a toilet and a urinal? Hmm...

Taplist wall good and varied, also a great selection of cans and bottles. Prices were very reasonable. I only had a hot dog, as I would be fed on the plane home, but the dog was very good.

The bartender was very friendly, I think her name was Joanna or something like that. Talkative and really funny. Knew a lot about the beer and breweries she was serving, which is nice. Sure, not alot of variation in glassware, but hell, its a dive bar.

This was my last bar on my Boston trip, and I'm very glad I tried it. Kind of the polar opposite in the place i was in earlier that day. Row 34, but really cool, and I will return for sure.

AVOID!
Bartender chastised me for not saying please.??? After attempting to order 3rd round, I made the mistake of ordering something NOT on the menu and she walked away without explaining or offering an alternative.
Jesus Christ, I have bar tended for over 8 years, and could never imagine treating patrons like this.
God help us all.
Avoid this shit hole like the plague.

Yoanna is very knowledgeable about her beers. Great little bar. Very large selection. Ask for beers not in the menu.