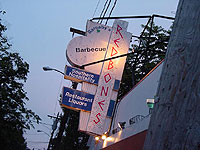 View: Place Reviews
Reviews: 117 | Ratings: 157 | Log in to view all ratings and sort
Reviews by TheLongBeachBum:

Not was I lucky enough to get here once during my recent trip to the AoBF2 Stammtisch Festival, but I got here twice.

The first visit was an impromptu break from the all-day Stammtisch. BeerFinancier, BierMansGirl and a few other BAs fancied something more than Pretzels and Wurst, to soak up the excellent flowing alcohol, as well as getting some fresh air. So we left the Stammtisch with a mission for some wholesome food, & after flagging down a Taxi-Cab - ended up at the infamous RedBones.

The traditional looking wooden bar runs down the left-hand side, as you enter. A full wall runs parallel to, and about 6 feet in front of, the bars counter. To your right immediately as you enter is the entrance to the upstairs dining are that lies behind the wall in front of the bar. We were here for the food and after collecting a drink at the bar we took our seats in the dining area and enjoyed a hearty, well-priced meal. The Jerk Beef Sandwich I had was excellent and spicy as I had hoped. But better than that, I had the chance to drink a Cantillon Kriek served on tap, which was stupendously marvelous. The McNeills ESB was also very good. In addition to about the 20-25 beers on draft, it also sells a Cask beer via Beer Engine, although the one I had was flat, lacked vitality & carbonation  this is so often a case of using hard & soft spiles incorrectly, or not using hard spiles at all to control the release of dissolved carbon dioxide in the cask. Still, it is true to say that this is a widespread problem I find in the US as a whole when I come across cask beer, so its not just peculiar to just Redbones, a minor beef really.

There is also a bar downstairs but we only visited this for a brief look when I attended Redbones the second time on the Sunday after the Post-Stammtisch Party at the Boston Beer Works  North Station when PatandDavid showed myself, xlperro & BochTech the brightly decorated underground bar  recognizable from so many of bennybrews photos from a previous BA Social.

After having heard so much about this place, I can honestly say that I was not disappointed. Drawbacks are its popularity, which can make it busy at times, and I could not get used to going behind the end of bar to get to the Gents upstairs Toilet  weird.

Overall, a great selection of Beer in a down to earth environment, that has the added bonus of selling some wholesome Barbeque food, which all makes for a superb establishment.

What I had: Ballast Point Sculpin IPA on tap, BBQ Beef Plate with beans and coleslaw, Corn Bread to split, Pulled Pork Sandwich and soda for my better half.
What I liked: Unpretentious, casual atmosphere, awesome decor, fast and friendly service, delicious smokehouse fare, robust draught list, parking nearby.
What I disliked: Beer prices are a tad high as the more interesting stuff is $7/pint and Belgian draughts are twice that amount. But you’re paying for quality in a well-to-do area.
Would I go back? For sure. Redbones nails the beer and barbecue theme with its authentic Southern food, redneck ambiance, and impressive tap lineup. Worth a visit.
Overall Rating: 84

Can be extremely busy but it is worth the wait. Generous beer menu.

Can't go wrong with Redbones! For BBQ in New England, it's superb.

Would go more, but their beers are always $1-$3 more expensive than they should be. excellent food.

Redbones has a great beer selection. They have a variety of sizes 10.5 oz-33oz. Their menu has detailed descriptions of the beers with prices listed for each serving size. Their prices are great and the staff knows how to serve beer properly. The food is great but it isn't authentic barbecue its like Tex-Mex compared to Mexican food. It is delicious but it just not the same. You can't go wrong with this place.

Truly one of the most over-rated places ever. Let's be sure to split this into two distinct reviews. Their beer list is nice and if you are ONLY looking for a quality beer and are standing out front. Fine, pop in and only order a beer. However, in a world of choices as a whole this place is nowhere near a great option. The BBQ claims to be authentic and isn't even close. Let's just say I asked if they had NC vinegar style sauce...... the waiter literally brought me cider vinegar. just cider vinegar. Go elsewhere for food & beer