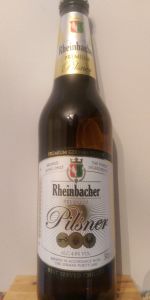 Rated by Tony7286 from England

Rated by Mattr700 from England

Rated by JonnyGoldsbrough from England

Grainy, rather than any depth to the malts and one-note hops with no Noble delicacy. At the same time, no creamed corn, brown paper or any of the usual sins you’d see in supermarket lager. You could do a lot worse for €1.17 a bottle. 3.75

Reviewed by Beergeeknut from New York

Notes: Would I pick this one up again yes it's may not be one the best Pilsners but it's good. Cheers

Reviewed by GarryCampbell from England

Rated by thommo_nk from Scotland

Reviewed by Malt_Man from England

T) Bready-ish malt and a nice dryness on the hops.
F) On-style; medium to light carbonation and there is a dryness in the aftertaste.

Reviewed by wickerman1 from Ireland

A: Pours a textbook clear gold with a pathetic two finger head of bad retention. Not excited to try this. At least it's a budget beer.

T: Barley body plus a little cream on the open. Whoopty fucking doo. Poorly built for the style. Unbalanced. Crap.

Mf: The cream and thickness save it, but it's unnaturally thick. You gulp on it, but the body doesn't substantiate this. Fake crap.

Dr: German purity law me arse. It has its pricing going for it, which is actually quite reasonable, but that don't save it. If you're in Ireland, get this over bavaria crown, but don't expect anything special.