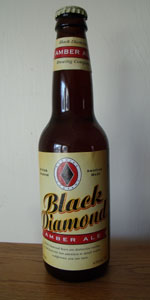 Pours a hazy amber color with an apricot hue, minimal white head, and some action.

Has a bit of a sour taste with esters.

After drinking their Blond Ale I'm some what dissappointed with this Amber.

Standard copper reddish color, head was slightly off white and retained fairly well. Lacing was not what I had expected as the thin rings were erratic and short lived. Good malty aroma, taste profile was very malt accented and seemed a bit on the sweet side, lightly hopped. It was rather an odd taste and made we wonder if it was off. This well could have been the case since i had this not at the brew pub but at a pizza joint. Still 22oz went down fairly easily. Not outstanding but not bad either.

Appearance - This is thick, deep brownish-orange in color with an almost tan head that erupted when I popped the top. This one is definitely overly-carbonated and the head didn't even look that good. The bubbles were loose and evaporated rather quickly for the style.

Smell - This has a very stale smell. The malt lacks complexity and while it doesn't offend it certainly isn't inviting.

Taste - There's a bit more sweetness at the taste that livens things up but the stale malt ruins the flavor profile. The hops are leafy and one-dimensional. Their website says that it contains "British noble hops" but whatever character they were trying to impart just didn't come out right.

Mouthfeel - This is thin for the style, not even medium-bodied, but did have a nice, toasty, mild bitter finish.

Drinkability - It sounds worse than it was. I was able to finish the bottle but definitely would not buy again.

Dark bronze-like orange with tangerine edges and multiple streams of uprushing bubbles. The pour produced a near explosion of khaki colored froth that is now filling 90% of the pint glass. Small splotches of sudsy lace manage to stick in spots.

The nose is par for the amber ale course in that it's toasted, earthy and somewhat fruity (although not citrusy). It sounds like the brewers were shooting for a British vibe rather than an American one, and it smells like they've succeeded.

Steep Trail Amber Ale is a beer without bells and whistles. Although it doesn't do anything wrong, exactly, it's pretty generic and is destined to be forgotten. That sounds like a summation statement, but we aren't done yet.

Subsequent mouthfuls don't hold up quite as well as the first few. The beer is dominated by toasted-earthy malts and a steely caramel quality. So far so good. However, it has a sour fruitiness and a metallic edge, neither of which are welcome. More (and more distinctive) hops would have helped.

The mouthfeel is a little thin for the ABV (5.7%) and is lacklusterly bubbled. Once again, abundant carbonation becomes wimpy carbonation before the bottom third of the bottle is breached. All things considered, barely average.

Given what else is available in the great craft beer state of California, it's hard to believe that Black Diamond does very well outside of Concord and it environs. Then again, this is my first BDBC offering. Bottom line: the view isn't worth the climb.

Smell is sweet scorched malt and tea with a faint rye grain aroma. Lastly smoke and a faint vegetable aroma.

The taste starts out dry and malty with a strong woody flavor and a slight astringent effect on the tongue. Good herbal hop flavor, as it mellows out a bit this tastes like a slightly harsher taste clone of Sam Adams Boston Lager.

Tastes a lot like Boston Lager only not as polished. Worth a try but I like the Sam Adams version better.

This was a rather odd tasting amber ale, the malt had a strange twang to it and it was a bit over hopped for the style if you ask me. These two factors made it, at best, a so-so American red. The color was a clear copper-red with a weak head that had very little lacing. The nose carried that odd maltly sent that is prevalent in the flavor of the beer. Can't say I would have another one of these.

The smell is on the mild side - caramel/toffee some plum, with an earthy tone.

The taste of sweet toffee has roasty, slightly burnt, edges. It has an earthy, somewhat metallic, bitterness that clashes with the maltiness that becomes subdued. Slight alcohol shows.

Carbonation is rough. Sandpaper-ish. Rather fizzy as it goes over the palate, yet it does keep the flavor lingering a bit.

It's pretty astringent/harsh. It does have a decent hop presence, but more in the way of bitterness sans flavour. Burnt edges don't help. Too many distractors add up here to make it really enjoyable.

I gravitate to traditional English style ales so when I saw the slogan on the 6 pack "British Inspired, American Made" and the notice that it was brewed w/English malt and hops, I bought. Well in short this reminded me of a homebrewed bitter I overhopped w/Challenger and Target. An astringent bitter finish (and I love bitter) really ruined this brew. Straight on amber in color, good head, compact retention. Aroma was hard to detect, honeyed and very slight flowery essence. Mouthfeel was thin. My guess would be excess kettle hop (see above). No repeat purchase here.

My first offering from Black Diamond pours a cloudy deep chestnut brown. The creamy large head is frothy and seems to have no ambition of leaving. The lace is fantastic, my glass can't breath.

The nose explodes with cocoa, hazelnut, and toffee. It is certainly malt heavy, almost a brown ale IMO. The earthy hop tones survive in the mix, but barely.

The flavor follows the same sweet and malty tones as the aroma. Once again, it's packed with nutty chocolate; added doughy notes and juicy plum make things more exciting.. The dryness that follows has a slightly bitter hop character that ties the knot.

The feel is thick and creamy, with just the right amount of bite. It's almost doughy as it slides around my mouth. The finish is dry and does more than beg for another drink.

This is a fantastic beer, certainly good enough to persuade me to look for more Black Diamond.

Got a bottle of this at Hops bar in the Biltmore Hotel, San Jose CA. 12 oz bottle with no freshness date seen.

I get caramel and toffee accents on the nose with a faint hint of earthy hops. Nice and average nose for the most part.

Taste reflected the nose. Causal blend of caramel and toffee (like the nose) with a mild hop bite. Nice amber ale qualities in this one - not complex, but easy to drink.

One out of 3 Black Diamond ales I picked up to try. Pours a mild amber color as expected with a head that's large enough to leave lacing.

Sweet, buttery malt and not much more. Mild pine hop essence if you smell hard enough.

Ditto for flavor. Cloyingly sweet. Can't tell if it was bottled in July of this year or if it was best-before July?

Palate numbing mouthfeel is unwelcome for the style.

My mind suspects the former as far as bottling is concerned but still, what a disappointment.

Basic Amber. The appearance was a nice amber color. Very little head or lacing. The smell was minimal but had hints of caramel. The taste was average - some malt and hops but nothing overpowering or standing out. Mouthfeel was a little thin - I usually like a little more presence to an Amber. Regarding drinkability, yes, it's drinkable. I would have it again, but if there were a choice it should hope for some week competition

Poured into straight pint glass. Poured a hazy/cloudy medium orange-amber color with less than a half-inch of off-white head that had low-to-moderate retention and very light lacing.

The aroma featured some floral hops mixed with sweet malts and a trace of pineyness in the background. The flavors were pretty much the same, a well balanced blend of floral and pine hops, mixed with a slightly sweet malt profile.

The body was the typically medium of the style, was a bit stickier at the finish than some examples, and had a tart hoppiness that lingered. Drinkability was pretty good, I could have a couple of these. Overall, a decent take on the style. Possibly a good entry level brew for someone new to craft beer. Worth trying when you see it.

Pours a fizzy oxblood with a fast fading off white head that disappears without a trace. Stewed fruit and roasted nuts on the nose, with a hint of orange. Smoke and molasses in the malts with spicy tea leaf and citrus oil hops. Woody linger. Sticky, lively and surprisingly thin for the flavors.

I've had ruby porters that drank lighter. Sticky + English, if that's what you're looking for out of a red.

Like some other reviewers, I was expecting a California hoppy amber like Red Rocket, and didn't get it. However, it does say "toffee, plums and hazelnuts" on the label, so you've got to rate it on what it is.

On tap at the source.

T - Nothing distinctly stood out about this brew; Dry maltiness, with a bread crust flavor.

D - Might pair well with a salty dish. Maybe fish and chips. Otherwise, would not recommend going solo with this beer.

This is a fairly good ale, more like a drier English-style ale in character rather than American or typical west coast ale.

From the bottle, it is copper, it has an utterly huge off-white head, usually out of control, sometimes just really large. The head slowly shrinks to a foamy, rocky head and leaves some foamy lace.

The aroma is a bit subdued, somewhat English, yeasty, caramelly, with a little toasted grain, dry hay that has gotten damp, hint of wet wood, leaves, resin, and metal.

The taste is somewhat restrained and rather dry but still basically flavourful. It is a bit English in character with light sweet-sour fruit, tangy teastiness, light caramelly bready sweetness, light spicey-leafy bitterness that is faintly peppery and a faint nutty-vanilla undertone. The finish is drysih, light leafy-peppery bitterness with slight caramelly-bready sweetness.

A- pour produces a 1 finger off white/light tan head that dissipates quick leaving very little in the way of lacing. Beer is amber in color and great clarity 3

O- this was a good beer and one I'd have again at the right price but there are far better Ambers around. Above average drinkability 3.5