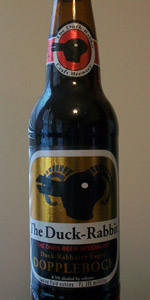 Notes: The Duck-Rabbator Dopplebock is a powerfully malty German-style lager. The malty / grainy flavors so dominate this beer, it's like a whole loaf of bread in every glass! Is it a beverage or is it a meal? It's both.
View: Beers | Place Reviews
Reviews: 157 | Ratings: 346 | Log in to view all ratings and sort
Reviews by thebeers:

Dark chestnut brown with a ruby tinge. Less than a finger of tan-tinted head. Fruity malt aroma with a definite flat-cherry-cola thing going on. Thick and syrupy mouthfeel. Very sweet up front, with more cherry and just a little chocolate, and a slight lingering hop bitterness for balance in the aftertaste. It's fine, but doesn't compare to the classics.

Appearance: Arrives with a mahogany color and a modest head that fades to a ringlet

Taste: Fig, date and caramel up front with a Mexican chocolate element arriving by mid-palate; after ther swallow, a hint of lager twang joins the other flavors; the finish is bold and sweet

Drinkability: A really fine stab at the style; a bit pepperier than the Germans make it but that is actually a nice touch

Smell: Sweet-scented, alcoholic, with a fruitiness of figs and grape-flavored candy (like Nerds or such), a step ahead of the dark-colored syrup, Tootsie roll, and molasses.

Taste: Molasses, caramel atop toast, and a noted roastiness. Dark syrup sweetness upfront. Rather bright fruitiness, fig and grape, followed by slight, herbal hops and a persistent pinch of alcohol (a bit fusel). Snippet of licorice. Slight nuttiness, with a touch of Tootsie Roll. Drying, rather warming, fruity finish. A little coffee pops into the aftertaste.

Overall: Potent in many of its aspect, it's not the best doppelbock to be had, though, I'm sure you could do worse.

Dark brown pour with an light tan head. Not a huge amount of lacing
Initial explosion of dark fruit on the nose, which subsides to a whiff of malty goodness.
Flavor is the best part of this beer. Dark chocolate, a bit of roasted malt, some espresso notes(I just got back from Italy so I guess that coffee is on my mind a bit). The flavors persist for a long time on the tongue.
For such a strong beer this is perilously easy to drink.
This beer is very much in the vein of the traditional German dopplebocks and is so rich that I would not have been surprised if it were an eisbock. This might well become my favorite Duck Rabbit beer.

Pours a dark brown color with a nice tan head that retains reasonably well. The aroma has a big molasses and caramel sweetness upfront, along with some licorice, honey wheat bread, cherries, plum, date and a little cognac. The flavor is similar to the aroma with a broad sweetness initially (notes of caramel, toffee and molasses), along with some dark fruits (fig, date plum, cherry), toasted wheat bread, licorice, anise, cognac, and some flinty hops. The mouthfeel is full and rich, and drinkability is excellent. An exceptional dopplebock from DR, it's complex and delicious...easily the best American iteration. Highly recommended

Had the privilege of having this on tap during dinner at the Arlington's Lost Dog Cafe.

Poured a clear tea colored brown with a small head that quickly disappeared. Aromas were very sweet and molasses-like. Very flavorful, with strong toffee and brown sugar elements initially dominating before a nice roastiness emergees to balance them out. It was sweet and phenolic enough to be dessert.

a: duck-rabbitor is dark and nutty in color, almost leaning towards garnet red in the dim lights of this basement bar, but mostly a deep pecan shell brown, little head to speak of

t: absolutely delicious, rich toffee and deeply toasted malts at the start, semisweet and bitter chocolates, a full and sugary barley flavor wanes as things become more and more roasty towards the finish, ends with lingering nutshell, dry cocoa, and an earthy hop bitterness, oh - and just an ever so slight nuance of soured grain

d: the alcohol isn't a detractor at all, but I'm perfectly content to savor this one

Poured from a bottle into a pint glass

S - Brown bread and molasses, gingerbread notes, and a lightly vegetal quality underneath

T - Malt-o-riffic, Rum, raisin, and sweet toffee, with the alcohol sneaking in at the end with a little heat. The hops also show up just in the bitter finish, but this is a malt dominator.

M - very smooth and pleasant, not too sticky, broken up nicely by the level of carbonation

O - great glass for a nightcap, nice example of the style. Just one per evening I think.

12oz bottle with the usual Duck Rabbit symbol on the front. There are two things separating this label with their other labels. This one has a gold background and the Duck Rabbit has gray ram horns coming out of its head. Off to the sides is the Government warning, brewery's address, and a notched best before date.

When poured into a Paulaner Salvator Pilsner glass, this southern Doppelbock was a semi hazy dark mahogany brown with a burgundy center. It was a rather interesting color. The red center was a nice touch to this beer. On top of this brew was a nice little head of foam. The initial head of foam was between 1/2 to 3/4 of an inch in height and light tan in color. It had great retention that left behind a small tan film and a ton of tan sticky streaks of lace around the glass. The film on top of the beer lasted until the last drop of beer was gone.

This Doppelbock was more sweet than roasted. The first aroma that I picked up was the sweet lightly roasted malts. After the malts had their fun in the sun, in comes a pinch of caramel, a touch of milk chocolate, and a subtle whiff of black cherry. The aroma as a whole was a little too faint for my liking. If they would have pumped up the aroma just a little more, this would have been a great aroma.

While the aroma was sweet, the taste was more dry and roasted. The first taste that I found was of course the dry roasted malt. Waiting behind the malt was a pinch of milk chocolate, a drop of molasses, a dab of caramel, and a sprinkle of roasted coffee beans. After all that, this beer then finishes up with a gentle touch of roasted hops. The hops were more roasted than bitter. A little more sweetness wouldn't have hurt this beer at all.

This was a straight up medium bodied dry roasted Doppelbock. As for the aftertaste, that was filled with dry roasted malt, roasted coffee beans, a pinch of caramel, a drop of molasses, and a big bite of alcohol. At least the alcohol wasn't overpowered. Even though I could taste the alcohol, I couldn't feel it.

Not a bad Doppelbock! It had an interesting color, a sweet aroma, a dry roasted taste, and an alcoholic mouthfeel. I think this NC brewery did a good job. The aroma could have been better, but everything else was good. Would I drink another one? Yeah, I wouldn't mind another single.

12oz bottle, thanks bert for your gracious shipments

poured with a cider-brined chop and some krispy kale

Pretty drinkable, not world-class, but pretty decent. However, at $14 a sixer, I would probably pass on this one again in bottled form. This one did grow on me as it warmed...