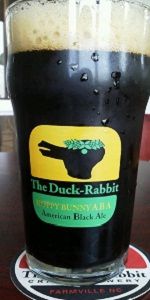 Today is Easter Sunday 2017, Su, 16 April 2017 & I have been saving this beer specifically for today! Think of it, what could be more appropriate than a hoppy bunny leaving me some beer in my basket? Interestingly, on my walk home last night, I saw a couple of rabbits running around in a nearby lumberyard. I think that they might have been getting busy when I walked by & my presence really scared them into darting around. I have a feeling that they resumed their unfinished business once I continued on my merry way.

From the bottle: "Made in Farmville, North Carolina"; "Proudly hand made in small batches".

I Pop!ped the cap & began a gentle pour, in keeping with my New Year's Resolution and my Lenten denial. Aggro pours from bottles are now (mostly) a thing of the past. I am really coming to embrace a vigorous in-glass swirl since it is much less likely to bungle things up. For Yeaster, I got just under three fingers of dense, foamy, rocky, deep-tan/light-brown head with moderate retention, leaving some great lacing in its wake. Color was Black/Opaque (SRM = 44), allowing ZERO light penetration & evincing cola highlights only at the edges. Nose had the same (IMHO) wasteful use of cool, minty hops with really dark malts with notes of black coffee and dark chocolate. My problem with this style is that the malts get in the way of the hops and overpower them. It's sad to this hophead. Mouthfeel was medium. The taste was actually not as roasty as some that I have drank & reviewed. When a balance, as such, is struck, the beer can taste like a liquefied Peppermint Patty. This one was still a bit too chocolaty for my taste, but at least I could still taste the mintiness of the hops. I did not really get coffee in the flavor like I did on the nose, but I certainly tasted dark chocolate! I liked the cool counterbalance of the hops, but I wish that they had been more prevalent. Oh well. I guess that you can't have everything - where would you put it all? Finish was dry, more roasty than hoppy, but fairly bitter in sum. However, I am still not sold on the style, which is the dictum for the basis of any review.

12oz single, served in a duck rabbit glass. I still think its a rabbit.

poured friom 12oz bottle into standard pint glass. Best by Sept 2013, so no worries on freshness.

Looked excellent when poured. dense black body, even when held up to the light. About a inch of thick coffee caramel coverd head.

Smell....well....not too much. a faint whiff of hops, and a roasted malt edge.

Taste was all roasted malt, no hop detection at all. Not unpleasant, just expecting a bit more balance.

Mouth was medium. Roasted malt stayed around on the mouth for quite some time.

Overall, this is a reasonably drinkable beer. However, I must confess to being irritated by two things. One, the lack of hops in a beer called "hoppy" Bunny (I guess "Malty" Bunny wouldn't sell as well) Also, and this isn't just Duck Rabbit, I'm beginning to wonder if Black IPA's are worthwhile. There are certainly tons of better IPA's out there, and tons of better Porters/Stouts. If you want to combine the two, both elements need to come through. This just doesn't cut it. It's more of a porter/stout. Not unpleasant, just not as advertised.

I might've entered my rating a little early, as this drink got better over time. Right out of the fridge, the flavors seemed timid and not all that complex. As the beer warmed up, the foretaste seemed more and more "stouty" while the aftertaste developed a hoppier tone. Nice roasted malts up front. Smooth on the tongue. And very pleasant hops in the gullet. Don't confuse this with an Imperial Black but do give it a try... just let it sit a while before you make up your mind.

Picked up a single at Chip's in OBX. It poured like a porter a near-black bodyand tan head. The citrus hops are well-balanced against the cocoa-tinged roasted barley. This is a smooth, medium bodied beer that could pass as an American stout or porter. It's plenty hoppy, but there isn't a clean upfront blast of hop oils to separate this beer from the other dark ales.