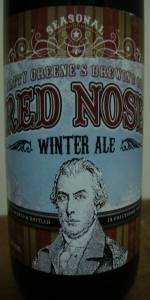 A: Pours a hazy mahogany in color with some ruby red highlights and light amounts of gentle visible carbonation. The beer has a finger tall dark beige head that slowly reduces to a large patch of very thin film with a thin ring at the edges of the glass. Moderate amounts of lacing are observed.

T: Upfront there are moderate flavors of dark fruit malt sweetness with just a touch of roasted malts. There is a solid spice component to the flavor of this beer with cinnamon and ginger featuring and a lighter amount of nutmeg - there is also a very light note of brown sugar and cocoa.

M: Slightly heavier than medium bodied with moderate amounts of carbonation. Light notes of alcohol heat in the finish.

O: This is an enjoyable beer and a nice example of a winter warmer - though there is a little too much spicing for this to be sessionable or a regularly drinker for me.

Natty Greene's Red Nose Winter Ale is better than I expected. First taste was Christmas Tree, but in a good way. Loved the favors, cinnamon, nutmeg, ginger; reminding me of Moravian Christmas cookies. Good head on the pour, from a 12oz bottle, but disappeared quickly, as did the beer. Must have been thirsty. If you're looking for a Winter/Christmas Ale, got to try this one.

Poured into standard pint glass, at slightly-warmer-than-preferred temp. Deep amber pour, with fine sediment, and light beige head. Head reduces to nothing after a few minutes. Molassas heavy, with slight orange rind and raspberry off the nose. More pronounced orange in the taste, resolves with nice tart bitterness and ginger snap. Mouthful brings out more cinnamon, but it’s underwhelming.

Overall, not a bad winter sipper.

Good balance of spice not much orange flavor. I'm not usually a fan of beers with spice but this one is not overpowering.

12 is bottle poured into a pint glass. Overall this was somewhat bland and disappointing. Appearance is very red and almost weak looking.
Heavy carbonation and fizzy in the mouth. Almost non-existent head. Aroma fairly flat bit a hint of orange. Tastes of Spices but non-descript. A bit sweet.