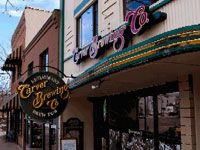 Vibe - Brewery and restaurant located within the heart of historic downtown Durango. For brunch on a Friday, the place was busy! Small dinning area that seats 50-75, plus a bar and a small bar area and extra seating in the back. A gorgeous outdoor patio that seats around 25; no view, but a very cozy feel!
Quality - only had one beer, the pine river DIPA. I enjoyed it, but it didn't completely wow me. A few of the other options also looked very appealing!
Service - Very attentive and friendly staff. Not only did our server spend time with us during this busy time to discuss the history of the brewery, but two bartenders assisted when she got busy!
Selection - about 7 regular options and 5 rotating. Enough variety to please everyone.
Food - wide selection of breakfast, brunch, lunch and dinner options; additionally, the options for kids was excellent and the whole family enjoyed their meals!

Great place in Durango with great food and service all day long.

Awesome laid back place in downtown durango! Great food, service and brews. Will definitely come back

Porter on Nitro was flat. Great food, flat beer. What can I say? Will give another chance.

Located at the North-End of "Historic Downtown", this is the "Hidden Gem" of Durango's BrewPubs. Having only a smallish Storefront, it is significantly larger once you find the Back Room and the Back Patio. The Beer Menu is usually kept to only 6-10 selections, but all do True Credit to the Brewmasters. The Food is rather Good, while the Menu sticks to Burgers and Salads.
Overall, this is my Favorite of Durango's (currently 6) BrewPubs.

I noticed that Carver hasn't had a review in a couple of years, so here's an update for the second oldest brewpub in Colorado (opened in 1988).

Carver's is a fixture on Durango's Main Street. It's a good example of a brewpub that knows how to brew excellent beer, serve good food, and please customers. There's a patio in back, a lovely wooden bar, lots of tables, and a competent and relaxed staff.

I want to emphasize their beers, as I see that earlier reviews mostly talk about the food. Carver's has 12 taps, 11 of them devoted to their beers, and one tap with root beer. About half the taps serve their year round lineup, and the rest serve a changing lineup of beers that range widely in style.

A tasting flight of 4 5.5 ounce beers is $10. Kudos for tasters that are large enough to get a good impression of a beer.

I had their standard Colorado Trail Nut Brown and three of their one-offs - a hoppy grapefruity Imperial Red Ale, a Belgian Dubbel that was a very good example of the style, and Pelon, an unusual take on a Belgian Blonde with a good dose of American hops.

If you're in Durango, Carver's is well worth a stop. You'll get some fine beer.

I say carvers is a reasonable value for the quality of the food plus the atmosphere. The selection of the beers seems to take a back seat, but when you're doing something right (with the food) why change it? I'm curious to try their black IPA but I remember the jack rabbit and the red ale doing the trick. It's a great place to grab a bite before heading out on the town. You know your belly will be full with delicious baked goods that encase the delicious cuts of meat or many vegetarian options. You feel good about yourself after eating at Carvers... as opposed to say the Durango Diner or Oscars.