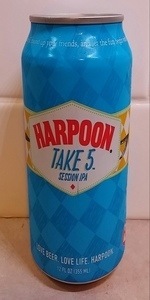 Notes: Harpoon Take 5 was first brewed on the Brewery’s 10-barrel system in early 2014. With each pilot batch the recipe was tweaked until the desired balance between hop aroma and malt character was achieved. This final version begins with a vibrant citrus and pine hop aroma from Simcoe and Amarillo hops and follows through with a sturdy malt profile from the combination of Pale, Vienna, Carapils, and English Amber malts. Hop forward but not too bitter, low ABV but with a significant malt body – a truly sessionable beer.
View: Beers | Place Reviews
Reviews: 50 | Ratings: 239 | Log in to view all ratings and sort

Pours a clear golden color with a modest head and decent retention.
The nose opens with a nice pungent hops aroma, floral, piny and danky. This is complemented by citrus aromas that add a tangy sweetness.
The taste is hops forward with a light bitterness that is muted and accessible, grapefruit rind flavors, piny and lightly peppery. Unlike other examples of session IPA that taste like “hop water”, this one has a hint of malt.
Medium to light bodied, moderate carbonation and with a lovely smooth crispness. Clean and with a dry palate and finish.
As good as a session IPA gets. I had three of these and could have drank more. A pleasant surprise.

Bottled and purchased at Asda where it can be bought for 4 for six pounds
Pours a hazy straw coloured body with nice looking white head
Aroma is the high in of low end dull beer
The flavour is like the aroma, not nothing but nothing massive

Take 5? I think I will take 10 in the summer. What this beer lacks in the visual and smell appeal it makes up for in the taste. Comparable to the #2 friend in a group of girls. She’s not the star of the show, nor the one you’re initially attracted too, but give it time and you can’t keep your mind off her.

The smell is bright with grapefruit, a hint of resin, grassy, herbal. Light malt aroma and a little lemon peppery contribution as it warms a little.

Certainly lives up to being a session IPA. The flavors is light, mostly grapefruit, slight resin, slightly spicy. The malt is a bit light, but present. With continued drinkng, the flavor unfolds a bit more picking up some tropical notes and a mild level of sweetness. It is not highly bittered which is a good thing - bitterness ould be overwhelming.

It feels a bit too carbonated and maybe slightly bloating to me, but the taste is clear, crisp, with a mild peppery aftertaste that is quite pleasant.

Overall, this is an enjoyable beer to me. There is enough going on if you want to really dig in, but it is easy enough to just sit and drink if you don't. High likability factor for me. Is iit am IPA...well, maybe not in terms of what we have become used to these days. West coast more than east coast which is fine by me, but a certainly a light riff on the theme.

Hmmmmm....84 is a bit low for this. As a session, I think the malt/hop combination is perfect. Citrus aroma, nothing to write home about. Full flavor. Citrusy/floral malts with a nice bread-y malt backbone. Medium bodied. Has just become one of my new favorite sessions.

12 oz bottle as part of the Harpoon 30th Anniversary pack.

Deep golden / light amber color. Clear with a big pillowy white head. Light orange citrus fruit aroma with some grass and pine. Lightly sweet malt as well. Flavor is very mild with moderate bitterness in the finish. Light bodied, thin, and just not a whole lot going on that makes you excited for the next sip.

Fucking session IPAs. Maybe the worst style of beer ever made. That being said, there's nothing wrong with beer, it's just completely uninteresting.

In a pint glass the beer was a light gold color. There was a small white head and a bit of lace.
Mostly a sweet malt aroma. Some floral hops.
Very malt forward with just a hint of hops.
Sessionable? Sure.
IPA? Less obvious.

From the bottle, it pours a hazy amber with a moderate, fluffy, head. Lacing. Definitely hops in the nose, not too strong, but then the beer is not too strong. Pleasantly light hoppy flavor. Sessionable!

Look and aroma were ok, but the taste seemed to have too much maltiness and overpowered the delicateness of a session IPA. Feel was ok, but a touch too sweet

Appearance: I had this one straight from the bottle because, well, it's a session IPA. It's just one of those beers to drink out of the bottle. That said, the branding on the bottle is fine, though nothing special.

Smell: Smells like bright citrus and floral hops, a pinch of freshly mown grass and lemon pepper for good measure. Definitely picking up on some malt sweetness.

Taste: Pretty normal for a session IPA- okay hoppiness but not necessarily enough to make it pleasurable. This beer was much maltier than what I was expecting, and the malt notes lent it flavors of dirt and musk. The weird malt notes is why I'm rating the flavor a 3.5- I think the hops were fine, but in a beer like this you need a clean, somewhat sweet malt backbone and I didn't get that here.

Overall: I feel like this is an alright beer, and as far as a hoppy, sessionable option goes, this isn't that bad. That being said, when I want a light summer beer, I'm still going to be reaching for cans of that Gansett Summerfest or Troegs Sunshine Pills.

Citrus and sweet tropical hop aroma on the nose.

Fairly light mouthfeel, dry, crisp, the slightest amount of bitterness up front. The citrus flavor comes in at the finish.

Taste - Follows the nose. Citrusy with a bit of spice and a strong bready presence. Finishes much the same.

Overall - Fair beer, but leaves a lot to be desired. The flavor profile is fairly simple, and not all that hoppy. It's drinkable in the least.

Bought a 6ack from Beers of the World 3/5/16. Poured into a Duvel tulip at fridge temp

Overall: easy drinking, refreshing, I like it but I think it is better right from the bottle

Draught beer served with a cup of chowder on a cold, snowy night in February! Perfect dinner drink prior to the main dish. Golden color, smooth taste (for an IPA), not too bitter aftertaste. Enjoyable!

Pours a pale, opaque golden color with light carbonation seen floating to the top. A very small head on this pour. Light smell of floral hops and a sweet citrus smell are followed with a balanced malt-hop combo for taste. Not too a heavy tasting - a good beer for an early happy hour.

S: very light on the nose, hints of floral hops and sweetness

T: a great, balanced session IPA, lightly hopped. The promised elderflower was mild and not very pronounced. Bitterness is not overwhelming.

Overall, it's not my favorite IPA. Others who enjoy elderflower may love it, but for me, it's certainly good enough to drink!

I like the idea behind the beer; a cross between the malty/hoppy profile. Unfortunately it's just not doing it for me.

Pale golden amber color (does a nice job holding on to the head). Mellow malty smell, with a touch of piney hops. Doesn't really convey a solid taste (might be because it's trying to balance between two different styles of beer?). Picking up a mellow malty-ness with a slight hoppy finish (maybe). Worse part of the beer for myself was the feel: way too bubbly/carbonated, borderline seltzer water mouthfeel (I haven't dumped a beer down the sink yet, but I'm seriously considering it right now :( Next up Harpoon IPA...Fingers crossed!

12 oz bottle that I drank straight from the bottle at a Christmas party.
Was pleasantly surprised how good this session IPA was. Definitely hop forward, as the American session IPA has been over the past year plus. I love the style, and citrus notes up front.

Excellent beer. Would like to see a bit more bite (Was a little less than I'd normally expect to taste) and ABV but puts off sweet aroma, great flavor and beautiful shine.
Love simcoe, one of my fav hops. I usually don't rank Harpoon beverages this high but this one is an exception. I will have again.

drinking this close to the enjoy by date, so may have to revisit it again with a fresher beer. looks nice in the glass. nose is subtle, but nice nonetheless. floral and pine scents are appreciable. the taste is quite good, has some citrus character and a nice light piney flavor. really really drinkable, which is its strongest attribute. I think the right balance between hop and malt was achieved. would recommend this one.

Pours clear, gold, with 1/4 inch head and high carbonation. Taste is herbal wet hops, with touches of lemon, and biscuity malt. Very well balanced. An above average sessionable IPA. Not one I will rush out for, but not one I would pass over if offered to me.

Poured from a 12 oz. can. And yes, that can did come courtesy of the chief of the canned beer tribe, woodychandler. Has a golden color with a 1 inch head. Smell is dominated by grapefruit. Taste is grapefruit, tropical fruits, light bitterness. Feels medium bodied in the mouth and overall a good example of a "session IPA".