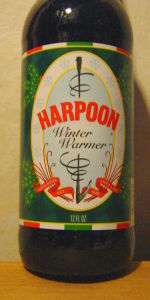 Notes: When you bring a glass of this dark copper ale to your lips to take your first sip you will notice the aroma of cinnamon. There is no aromatic hop added that might overpower the distinct spice scent. The medium body of this beer is formed from caramel and pale malts. These create enough body to support the spices without making the beer excessively rich. Bittering hops are added to counter the sweetness of the malt and spice. The finish of the beer is a blend of cinnamon and nutmeg. The combination of these two spices results in a balanced, pumpkin-pie flavor.

Finely dusted terra cotta that appears unblemished unless backlit. The softly creamy cap is sandlewood in color with a slight orangish tint picked up from the beer beneath. Although it isn't loaded with character, the foam hangs around a while and leaves a modest amount of unsticky, soon-to-be-washed-away lace.

I'd like to think that, even without being told by Harpoon, I could have identified the cinnamon and nutmeg used in this beer. I'm positive that I could have picked out the nutmeg since this is one of the nutmeggiest winter warmers I've ever run across. The nose isn't powerful enough, nor is does it have any real underlying complexity.

I feel the same way about the flavor: better than average, somewhat enjoyable, nowhere near great. I don't believe that simply adding spices to an amber ale is enough to turn it into a winter warmer. I think winter warmers should be a little bigger, a little bolder and a little more full-bodied than the beer that is sitting on my coaster at the moment.

On a positive note, the choice of spices is nice and the amount added is just about perfect. The warm 'cinnameg' flavor isn't too muted, nor is it so overwhelming that drinkability suffers. It shares the stage with a toasted maltiness and an adequate amount of hop bitterness. This is simple beer, but there's nothing wrong with that in most cases.

The mouthfeel doesn't fit my favored profile for the style, but it does fit the rest of this beer's attributes. It's somewhere between light and medium, with enough carbonation to keep things hopping. Drinkability is good for many of the reasons noted above. The spices may become a bit wearing over an entire sixer, but a few bottles would be no problem at all.

Winter Warmer grew on me from first sip to last. Once I got out of the mindset of 'hearty, sippable and warming' and accepted the possibility of a lighter, easy drinking, spice-added winter ale, I enjoyed it more and stopped thinking of ways in which it falls short.

The cinnamon is immediately noticeable in the nose of this reddish-amber ale. It's bright and fresh and welcoming! It's creamy ivory-colored head holds well, and it leaves some small areas of craggy lace at the outset of the glass. In the mouth it's medium-light bodied but still somewhat creamy and surprisingly smooth. The softness is a nice change of pace; and it's restrained carbonation helps balance it by letting the malt come through rather than accentuating its spiciness. Nutmeg and some mild cloves appear in the flavor along with the cinnamon and some yeasty fruitiness. Initially some malt gets through (although the spices do start to becoming cloying halfway through), and it's just-delicately caramelish and mildly biscuity. It's flavors are subtle except for the spice, but it's well-balanced. The malt is mild; the bitterness is sublime; and it's spices are clear but kept in check. It's a really nice holiday beer that would be perfect before, during, or after a holiday meal; but I'm not sure how drinkable it would remain outside of a special event. I'd enjoy one at the pub, but I don't think I'd go beyond that - personal preference.

Poured into a clear mug, the appearance was a copper to dark amber/brown color with a finger's worth of white foamy head that glistened before gently sliding off. Sticky speckled lace.
The aroma had some cinnamon, allspice, ginger, dark bread, some milk chocolate, nutmeg, butterscotch, and a little bit of earthy spice even lighter in the background.
The flavor was moderately spicy with a gentle sweetness coming about. Light aftertaste of a blend between chocolate, butterscotch and nutmeg.
The mouthfeel was about medium bodied with a fair sessionability about it due to the spices becoming non-distracting. Carbonation felt on par. Finishes slightly spicy with a little bit of malt.
Overall, works for me as a winter warmer, I'd have again.

Pours a deep gold with reddish highlights throughout. A thin oily tan head forms, but quickly fades leaving a slight lace down the sides. Cinnamon and nutmeg dominate the aroma with a solid malt backdrop for substance. The taste is more of the same cinnamon and nutmeg. There's also pine cone and licorice. It's hard to pick up any hop element due to the spicing. The carbonation level is fairly high, delivering the flavors to the tongue.

This is a strange beer for me. I enjoy the aroma. I enjoy the taste until about mid bottle, at which time it becomes cloying and a little overwhelming, thus my low drinkability rating...I definitely wouldn't want more than 1. It is perhaps the least thirst quenching beer I've ever had...it coats my mouth and makes me smack my lips looking for some water. I love much of what Harpoon does, so it pains me to give them a low rating, but this beer just doesn't really do it for me.

A- Pours an dark orange with just half a finger of foam and no lacing.

S- A very intense smell on this one. As soon as I pick up the glass aromas of bannana and spice hit my nose. There is some sweet buttery carmel too.

T- I was just enjoying smelling this beer so much, but the taste brings in a whole new party. There is still the bannana, but the spice really takes over, throwing a whole grater of nutmeg into my mouth. As I continue to drink, some minty wintergreen flavor pops it head out...interesting.

M- Quite thick and rich.

D- This is really blowing my expectations of a winter warmer. The spices, instead of tasting simply of pie, are delicious. And the strength of the smell and taste in this beer is increadible. Great job Harpoon.

Harpoon's Winter Warmer pours a fairly clear amber, with some orange highlights showing through. Maybe two fingers of cream colored foam crown the beer, with just a bit each of head retention and lacing. The nose has a potent burst of cinnamon and nutmeg, very pumpkin pie like. There's also a biscuity malt aroma present as well. The flavor profile isn't as robust, especially when it comes to the spicing, There's a bit of toasty bread and caramel up front, followed by a light, balancing bitterness. The spices come in for the finish, and they're just not nearly as lively as I would have anticipated given the nose. The body is just a touch on the thin side, but the carbonation has a good bit of pep to it. Despite a nice aroma, Harpoon's Winter Warmer is just a passable offering.

I spend a few moments marveling at this pure, crystalline copper pint. Its smallish, foamy head has some of the biggest bubbles I've seen on a beer, and it dissipates very quickly into a thin nebula. Smelling cinnamon, cloves and nutmeg, I wonder if I've finally found a winter ale that tastes how I expect a winter ale to taste. I'm fairly certain that no pumpkins were harmed in the making of this beer, but I associate this mix of spices so strongly with pumpkin pie that they spring to mind anyway.

I smile as I take my first swallow. Yes, I have found a winter ale that tastes how I expect a winter ale to taste. Finally. This is absolutely delicious. There's a tingle on the tip of my tongue amid the pleasant wash of spices, and that's as close as I can come to finding any complexity in it. Try as I might, I just can't get multiple taste stages out of this one. I don't care, though. Not one bit. It's cheery, beautifully balanced, and outlandishly drinkable. Gotta get me some more o' this.

A- spices - nutmeg overpowers cinnamon and all together smells a bit like egg nog. The taste from the smell and overall it is just not that balanced and has too much spice. I would like more of the bitter to shine and balance this better

O. I bought this as a one off and I will prob never try it again.

Pours a ruby-amber color with a thin lacing of cream-colored head.

A lot of spice on the nose (nutmeg & cinnamon mainly). Maybe a slight bit of floral hops as well, but the spice really hammers home on this one. A bit TOO MUCH!

Sipping reveals a slight maltiness but....oh my god, the spice! Very sweet spicy flavors of cinnamon up front with a big splash of dry nutmeg coming through after. Finish is a bit of biscuit flavor but the spice just really dominates too much.

Decent feel for a winter warmer. Crisp and carbonated with a bit of a watery finish. Not sure where the "warmer" part comes in.

I can get through ONE of anything. This is absolutely the worst offering from Harpoon I've ever had. I just think this one missed the mark big time.

smells of nutmeg, pumpkin pie spice, malts.. reminds me of the smell of all the pumpkin beers around fall more than the standard of a typical winter warmer.

tastes of nutmeg and spices abound, definitely like the pumpkin seasonals but the malts shine through and balance things a little more, sweet, spicy, bitter, not bad but not amazing, something i would want to serve with a meal but not really stand alone on its own.

Pours a nice dark red color with a little head that sticks around. Nice lacing.

Smels of sweet candy and spices. Very sweet, but not sickeningly so.

Tastes exactly the way it smells. Nice and sweet. If it wasn't 80 degrees outside this would be a nice fireside beer for Christmas.

Nice and creamy in the mouth. Good body.

Good beer, but not necessarily one I could have too many of. Surprisingly low ABV.

12oz into pint glass.
A: Pours a clear amber with a thick, two finger, tan head. head disseppears quickly leaving no lacing to speak of.

S: Sweet with hints of herbs and spices.

T: Sweet at first quickly followed by the hebs and spices. Hop bitterness develops after a few sips. Finishes dry with a lingering bitterness and herb. Not bad.

poured from the 12 oz bottle into my new belgium goblet:

D: this is RICH = flavored. no to be guzzled.

LOVE the FLAVOR! but very unusual