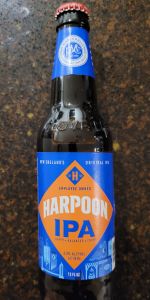 Notes: We started brewing this beer as a summer seasonal in 1993. There were some great IPAs out in the Pacific Northwest, but no local IPAs on the east coast. We wanted to have a local IPA, so we brewed one. People absolutely loved it, and so did we. So we made it a year-round beer, and it’s now our bestselling beer and our flagship.

Since its introduction, Harpoon IPA has remained unique in its ability to balance hop bitterness with a strong malt backbone. Dry-hopped with Cascade hops, it has a floral hop aroma and a finish that is bitter (it is an IPA after all!) without being harsh or astringent. Combined with a malty sweetness and the fruity esters of our proprietary yeast, those hops create a beer that is wonderfully hoppy but clean and refreshing enough to enjoy a few of - and we hope you do.

Radiant amber with a hint of orange peel when backlit with morning sunshine. The polished ivory crown is truly gorgeous. It's thick and rich and sticky and is beginning to lay down an impressive amount of lace. Although lighter than most IPAs, this is good looking beer.

I'm a sucker for a Cascade-hopped APA or IPA. This one smells more like the former, but that doesn't mean I'm not enjoying each and every sniff. Given the color and the nose, I'm betting that caramel malt wasn't used to any great extent. Good.

I can't believe it's taken me this long to acquire a bottle of Harpoon IPA. I know the brewery considers it to be their flagship beer, but, beyond that, I don't have any preconceived notions. And the conclusion is... yeah, not bad. My worries about a lack of IPAness in the nose apply equally on the palate. Time might have passed this offering by since 'generously hopped' isn't a phrase that applies in any way, shape or form.

The flavor profile is on the simple side (no crime in that). Pale malt, with a hint of something more earthy and toasted, provides ample backing for what has to be considered a barely acceptable amount of citric hoppiness for an IPA in 2007. There's plenty of bitterness to go around, although it's still on the left side of the bell curve for the style.

At the risk of beating a dead horse, the mouthfeel is APA-like (light-medium and briskly carbonated without being overly busy). Simply put, this IPA should be thought of as an American pale ale. It makes more sense that way.

Harpoon IPA might have been the 'be all and end all' at some point in the history of the craft beer movement, but it's no longer on the cutting edge. The good thing is that it has retained enough sharpness to be enjoyable (on occasion) to hopheads and to be a good introduction to those who wonder what 'all this fuss about hops' is about.

A solid starter IPA of the traditional back in the day variety, I drank a ton of it for a while - similar to, but inferior to in every aspect the great SNPA.

aroma is sweet and grainy, malt forward with floral and slightly piney hops on the wings

taste is sweet and juicy, with a floral flair up front that fades to an earthy light bitterness tinged with pine with the finish

overall:
solid session IPA that runs mostly sweet and juicy but manages a solid balance thanks to a cascade hop bittersweetness.
wouldn't consider it one of the greats, but it's in the top 15 for me as far as highbrow craft IPA flagships.

Not one of the better ones I have had from Harpoon, but still solid enough to enjoy. Comparatively speaking, it's not as sweet smelling or juicy as others, but the mouthfeel was full-bodied which made up for a less than favorable taste. Again, when you take it all in, it's solid. Just not necessarily memorable.

Look...darker brown copper with a white head and ample carbonation . The way IPAs used to look
Smell...faint smell of hops as the usual like many of the old school favorites.
Taste...Exquisite apricot, malt bitter with a very full body for the ABV. Back to the taste, apricot leaving to a finish dryness
Feel...A n ample carbonation that makes the consistency a little sticky and resinous. A great quality to this beer.
Overall...My belief is slanted such as this beer was a staple for a long time. This was my requested wedding beer that had to be there!! Anyways this beer was a very good one and still everyone should try. This beer was definitely a trail blazer out east.

Scrappy notes from 2010.
6 pack of 12 ounce bottles purchased chilled.
This is probably the lightest tasting and lightest drinking IPA that I've had to date. It has a beautiful copper color with a nice white head. The nose is pretty full with hops that are flowery and some malt. The taste is mainly hoppy and is a bit thin or watery but tasty nonetheless. It has a nice light bitterness to it and drinks easy and fast. Not too shabby.

The claim is "New England's First IPA" and that may be. Most beer historians credit Ballantine as being the first to brew one in the U.S., but that was in New York. Enough history, let's empty a twelve ounce can into a clear Imperial pint glass and review it. First, it's a lovely bright copper-amber with a sparse, but enduring white head. There's plenty of malt to be had by the nose. The taste is sharply hoppy, with the malt failing to keep up. The hops are boldly bitter, earthy, yet finishing dryly. This is a good bitterly hopped AIPA, lacking only a little malty counterbalance. It may not offer enough complexity for some, but this is a spot on traditional IPA.

Pours a crystal clear copper-gold with two fingers of dense, foam insulation-like head. Retention is excellent, leaving a thick, creamy cap and a tattered curtain of lacing. Honestly, I wasn’t prepared for it to look this good.

There was a time I drank quite a lot of this and I guess I wasn’t as stupid as I remember myself being because this is mighty tasty. The fact that it’s only a month old may have something to do with it. At any rate, the can label promises ‘hoppy, balanced, crisp’ and fucked if it isn’t all of those things.

Overall this beer is just a snooze fest. Its a cheap beer and i get that, but this is not a good beer. There is nothing overly offensive about this beer but it just taste like water. Not what i expected for and i feel at this price, there are better options that will make you much more happy.

Sometimes you just need a break from the hazy IPAs that occupy every store and every corner of the refrigerator. And sometimes you don’t even want an IPA. This Pale Ale takes me back to some of my first craft beers, before IBUs started hitting sky high. And because of that it is like so many other pale ales, clear and clean, with a nice squeeze of hops and a refreshing palate that would be very difficult to replicate in a higher gravity style.

This is a really nice, balanced IPA. It has a very clear, rich, honey color. The taste is a little bitter with bright citrus notes. It's pretty easy drinking, full feeling, and goes well with rich or spicy foods.

Pours a golden, copper in color with a thin layer of head. Not much lacing as you drink. Carbonation looks spot on. Aroma is very floral with some herbal spiciness, bubblegum and a toasty, biscuity malt backbone. Taste follows the nose surprisingly well. Spicy, earthy, floral hops with some lemon, grapefruit and pine balanced out by a toasty, biscuit malt backbone. Mouthfeel is medium with subdued but lively carbonation and a little bit of chewiness. Pretty drinkable. Overall a solid offering that is balanced and offers some complexity, but it's a bit too spicy/piney for my preference. Cheers!

Poured from 12 oz bottle, bottled on date: 01/06/2020. Nice golden color with a dissipating white head
Malty on the nose, like toasted nuts and slight floral hops and hint of pine
Taste is hop forward, citrus to the back and hint of floral, distinct malt, but on the bready, biscuity side
Feel is medium bodied, but a bit too over carbonated
The first time I tasted this ale was at the end of 1997 and it was on draught at Christopher's in Cambridge and it was fantastic. It has lost that wonderful floral, malt smooth balance it had back then. But still a pretty good ale for the money (usually the lower priced option of the choices)
Edit: I have since read some other reviews and one or two have dissed the beer according to where they bought it on draught. Beware. There is a big variation in how this is kept in bars and restaurants. I recommend trying it local to Harpoon, Boston and in a place that looks after their beers, such as the brewery itself, of course

A classic on the Boston beer circuit since the mid 80’s and one that I consistently find myself ordering at restaurants and bars. A very reliably west cost style IPA that that tantalizes your tastebuds with crisped malty goodness. For those of us at 1009, this is the standard for the style that all others are compared to. For the love of beer!

Sharp, hoppy and bright - wonderful strength (caught me out first time I drank it).Alays consistent and on draft was a perfect beer. Loved this beer when living in Boston MA a few years ago - converted me to Cask IPA forever. It was briefly available through Adnams here in the UK but that was short lived. Is it available at all anywhere in the UK? USA IPa's are huge now over here and this would be a huge success if it was widely available.

Pours a translucent honey color with a decent foamy white head. Smell malty bread (pumpernickel) subtle hints of fresh hops. Taste is very pleasant,nice bitter hop bite with a suitable malt backbone. Feels crisp,bitter,ample carbonation. Overall a fine example of an English IPA. I have noticed this style gets little respect with scores,I think American fruit hop bombs make this seem "mild" and people don't rate according to the style. Why are Pilsners low and stouts High? The finest examples of Pilsners usually never hit 90, yet a mediocre stout will get a 92.