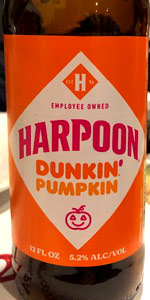 It's like a drinkable lower abv Cold Brew Pumking - combines the pumpkin seasonal spice and squash combo with a little cinnamon and lactose for good measure... Drinks pretty rich for a low abv beer - not too sweet - very smooth - trace of spiced vegetal gourd to ground it out - I liked what I'll call an amply-spiced earthy rustic approach...

12 oz. bottle.
Moderate pour yields a 1/2 inch off white head over a murky, pond sludge body with some lacing. Nose of spices, some pumpkin, and very little coffee. Taste is more of the same and still lacking in coffee. Good feel and overall, there, I tried it, and you should, too! (If only to keep me company as I try to get through this!) I'm (shudder!) starting to get used to it as the coffee and cream attributes are coming forward a bit, saving it from an early grave down the drain.
Cheers!!!

Bottled on 9/28/20. 12oz bottle poured into a tulip. Pours a hazy, cloudy and murky brownish golden; nice fluffy and creamy khaki head that falls slowly leaving great thick retention and sticky frothy lacing. The aromas have some pumpkin spices along with some subtle hints of coffee. Mild hints of apple. Malts are there. The flavors basically follow the nose for the most part. More pumpkin spices. Some cocoa and chocolate coming through. Hints of caramel and vanilla in the mix. The coffee is subtle and balanced but comes through. Malts do their thing. Finishes clean and dry. Alcohol goes completely unnoticed. Mouthfeel is light-bodied with sharp active carbonation. It's spritzy, crisp and smooth.

This is an alright pumpkin ale. It definitely has a "pumpkin spice latte" vibe going on. Everything is clean and balanced. Not bad.

DistrictElite from District of Columbia

Smell: Reminded me of apple cider

Taste: Initial taste has apparent notes of clove, cinnamon, and nutmeg. After about halfway through the glass, the taste became dimnished and left a sweet aftertaste. Did not taste any hops (positive aspect from my view)

Feel: Surprisingly light. I was expecting it to feel heavier from the appearance.

Overall: Surprised myself and my wife, who was dreading the sample. I have had some pumpkin spiced stouts but this was my first lighter version.

This one pours a golden brown color, with a small head, and lots of lacing.

I think I like this one better than the coffee porter that they did last year. The coffee flavor is obviously not super complex or dynamic, but it works well enough here, adding some chocolate roastiness to the pumpkin spice character. There's no actual pumpkin flavor here.

This is pretty thin, but very drinkable, and slightly creamy.

This does a decent enough job at approximating that basic white girl drink that everyone is familiar with.

I found this to be a little meh...

When I poured it out, I found it to look like an orange soda, I was relieved once the entire can drained into the glass and it had a very nice, dark orange look - very appealing. The smell was a muted blend of pumpkin and wheat that worked, which then led me to the mouthfeel. First impression was watery, very watery. As it warmed it thickened up some, but just some. The taste reminded me more of a summertime wheat than a Fall pumpkin brew, so a bit disappointed. Overall, a decent brew, if not the best of the style.

Like a lot of craft beer nerds, I"m not a big pumpkin fan and even less of a fan of it being in the brews that I drink. Once in a while, I'll grab something of the sort before the season's gone and this might be my token pumpkin beer of this year. Yeah, it's been ages since I had anything from Harpoon *or* Dunkin' (as they're now called) but this turned out to be a fun, easygoing choice that didn't taste like puree, spice, or a gourd as this felt like a cross between breakfast and dessert!

Not surprisingly, this beer poured like pumpkin as it let in quite a bit of light around the edges, and had enough head to fill up the remainder of my pint glass. A good amount of pumpkin, cinnamon, coffee, and cream were in the nose as this was much thinner in consistency than I would have guessed. Some spice, pumpkin pie, and cool whip added to this beer's allure once I gave it a sip, as this didn't last in my glass for very long! This was not your typical pumpkin beer as the mouthfeel was as light as could be for a brew of this type.

Ditto for the alcohol as it would have been a piece of cake downing another bottle after finishing this off. Bottled on 8/31, this tasted and felt fresh without being bitter or too reminiscent of a cup of joe. This was a pleasant surprise that was one of the better examples of the sort that I've ever reviewed!

Bottle poured into a tulip

I came in with great expectations and was ultimately disappointed. While Shipyard, Jack-O and Pumking are the clear standards of the class, this just didn’t live up to those. It’s relatively flat, bland and had a strange smell upon opening. I was expecting a winner here and instead this became the Minnesota Vikings of pumpkin beers. Flashes of brilliance but will ultimately disappoint you.

The next entry from the Harpoon Dunkin case is their pumpkin beer. It has an appropriate color and is awfully cloudy. It doesn't have much of an aroma, and I had to almost stick my nose into the beer to smell any of the pumpkin. The taste is what I feel Dunkin imagines pumpkin tastes like. It's pleasant, but too light and it disappears quickly. The mouth feel is very thin and doesn't linger. It's not bad but it could be better.

Smell: Strong aromas of fall spices like cinnamon and clove and more subtle roasty notes of coffee underneath. The nose smells a lot like apple cider. Prior to tasting the beer, I am unsure if I like this nose or not

Taste: Up front, there is some tanginess, sweetness, and warm spices (cinnamon, clove, nutmeg) that resemble mulled apple cider. Then the carbonation moves this through the palate and there is a slightly bitter, roasty, and spicy finish that is devoid of character and distinction. It doesn't really taste like pumpkin or coffee. I also cannot really detect the lactose in the taste. I allowed this to warm up out of the fridge for about an hour, but maybe it needs even more time to warm? Too much spices in my opinion, they overpower the other flavors in the beer. The coffee flavor is such a subtle afterthought.

Feel: Probably the best aspect of this beer - the body is relatively thin to medium yet it has a soft, smooth, creamy mouthfeel. Appropriately carbonated.

Overall: My first pumpkin beer of the season. Personally, not a big fan of this beer. A little disappointed with this one. A decent attempt and I applaud the creativity. To me though, t doesn't taste much like pumpkin or coffee. Based on the ingredients ("ale brewed with lactose, cinnamon, pumpkin puree, coffee, and other natural flavor") it seems that they were trying to put together a "pumpkin spiced latte" kind of beer, and I think that they missed the mark. Overall though, it was still somewhat enjoyable. I just don't think that it lived up to what was advertised on the label.

Dunkin’ Pumpkin brewed Harpoon Brewery & Beer Hall with an ABV 5.20% This Pumpkin Beer pours out of a 12oz glass bottle into a pint beer glass. The color of this brew is a hazy light brown color with a nice white head. There is also some nice lacing to this brew, it sticks to the side of the glass well. The smell is Rich with pumpkin spices an coffee notes. So far Dunkin’ Pumpkin is a nice inviting brew. Now for the taste is Bold with flavors. You pick up a nice amount of coffee notes mixed with pumpkin spices. Puts you in the fall mood. The body of Dunkin’ Pumpkin is a solid medium . There is nothing overpowering about this brew, it has a super nice balance to it. If you are a fan of pumpkin spice you should definitely look this brew up. The mouth feel is Bold, Rich, Coffee, Pumpkin, smooth Clean, Refreshing. Overall I am going to Dunkin’ Pumpkin a 4.50 out of 5. I would definitely look this brew up again givin the opportunity to.
Harpoon Brewery & Beer Hall did a super nice job with this Pumpkin Beer.