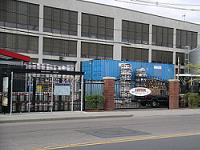 Massive brewery and beer hall near downtown. We went on Saturday night, so service was at a crawl, but we still had an outstanding time. All beers were of great to outstanding quality. The pan pizza was like a Detroit style but a little more burnt on the bottom, highly recommended. They had brewery tours running every hour or so, but I didn't have time to see it. Did see all of the equipment outside, which was huge. Definitely worth a visit again.

Large beer hall with plenty of space. Outdoor seating is great when the weather is nice. Can’t beat the beer!

What I had: Harpoon UFO Pumpkin and IPA for me; UFO Hefeweizen for my partner.
What I liked: Fun, no frills beer hall atmosphere, mixed crowd minds their own, expansive retail store, respectable range of styles on offer, cask available, fair prices.
What I disliked: Took a while to get the attention of the bartender; they brew good, balanced beers that are on target for the style, but none of the beers are particularly unique or outstanding in quality.
Would I go back? Sure. This place is worth hitting before a Red Sox game (they offer a shuttle service to Fenway Park) or to snag a couple drinks before lunch or dinner at Yankee Lobster (next door).
Overall Rating: 76

located near the water, but in an industrial section. the taproom is on the upperfloor, a long space with a huge rectangular bar, with communal tables along the window side, and views into the brewing area on the other. long taplist of Harpoon and Clown Shoes branded beers - both regular, seasonal, and limited brews. Several pre-determined flights are available as well. fairly wide selection of beer styles available. beers are solid. they have some food but I didn't have any.

Cons:
-Small beer hall; events are roped off so anyone can see you in the brewery
-Not much to do on a normal day in terms of activities

Overall - Great place to visit, especially during events. Can't see myself going on a normal weekend more than once or twice a year.

Uncomfortable cheap cafeteria style bench seating, floor was dirty which does not give confidence on their ability to run a high quility brewing operations, no servers/bar service only and each time you want more than one beer everybody has to go up to the bar. Music selection wasn’t great and sounded like it was coming through a PA system, the crowd (100% of it) can be described as hipster yuppy, no outdoor seating, no games. In samples 8 beers and only 2 were half decent, 2 more drinkable, and the rest I didn’t finish.

Huge open second floor taproom to the right of the entrance with expansive racetrack bar and plenty of picnic table seating. Small merchandise sales area to the left. About 20 well assorted beers on tap. Quick and courteous service. We were there Friday at happy hour and the place was packed and lively.

Ehhh...What can you say it's an average brewery with some decent brews, nothing special. If you go to any of the brewfests or large outdoor events make sure you step back in line for the bathrooms as soon as you get a beer, they only have about a dozen portos for hundreds of people and the line can be up to 20 minutes.

Great place to spend and evening with friends while visiting Boston.

Huge crowded beer hall vibe with long community table. Spotty service when it is crowded but some cool beers on you can't get normally in bottles. Worth a stop in.

Parking is a problem, loud, full, tough to get seats, or servers attenton. Never-the-less worth the visit. Good selection of brews, a fun boisterous Oktoberfest - like venue. & the pretzels are fantastic!

Several people told me that Harpoon was the best brewery to visit in Boston. I have to admit that after my experience I am quite underwhelmed. First off the beer...it wasn't very good save the Hoppy Adventure which was a fairly good copy of a NE IPA. The rest of their beers that I tried tended to have course carbonation and seemed like craft beer that you might find 15 years ago.

The second issue that I had during my visit is that they seem to value the ease for their employees over the desire of the customer. While I sat at the bar most of people coming up to the bar were asking if they can create their own sampler flight. No, we only do three preset flights was the response. I understand that it is tough doing custom flights during a jammed weekend night but really, no choice at all, ever? It doesn't seem very customer friendly or flexible.

This place would work for larger gatherings where beer quality/choice weren't as important though.

So (Evil) Davo did not do his homework properly. I mean, why would you think it odd that a brewery might be open at 8am, right? (Oh, the coffee shop side opens at 8am, the brewery opens at noon). Idiot! As such, it’s a Harpoon Beer Hall at the Seaport Sunday before we meet up with others and work our way back southish. Nose to the door at opening, in and up…

Large room with a looooong cut tree plank topped vagina shaped bar with a wood panel base and piping foot rail in the center of the room. I’m sorry, what? Yeah, you read me right (Seriously, the bar tapers to a near point at both ends, and I thought I’d seen it all). Tap towers of 24 in barbells of 12 & 12 on each end with logo harpoon hook handles, UFO’s and more. Glassware of all sizes & shapes shelved below the length of the bar. The bar seats 2 dozen on one side, and standing room/brewery tour line up on the other side.

Industrial waffle ceiling, slat plank floors, and walls of brick (and wood & window depending). The far wall windows offer views of packaging and production bottling action when it’s going on. The near wall overlooks the Seaport. As Davo’s car is still there with my Treehouse growlers, the city won’t burn this day. Drop wide wheel chandeliers over the bar running the length and chandelier lamp lighting over the adjacent beer hall tables. Kitchen space for the reconstruction of the pretzels/pretzels of the reconstruction; salted, cinnamon sugar, or parmesan if you’re a goddamn carny. Swag zone on the end. Fanboy Davo went and bought some Harpoon stickers. Fridge for cold beer to go + more swag, glassware, et al.

8 beer hall tables & benchings in 2 rows of 4, some hightops shared up front, a few raised roundies to the rear, and bar counter seating in the windows for 2 dozen or so on the production side. We set up at the bar as to survey all that is ours.

Sampled and/or drank the Harpoon IPA (mad fresh, real nice, it’s been a while), UFO Pale Ale (another fresh easy drinking Sunday in Boston beauty), Camp Wannamango (a better #9), 100 Barrel Series Thunder Foam (good heat), and the Black Mass (all that and a pretzel). Great offerings. I mean, there were styles on the board I might not generally entertain, but everything I had was solid.

The glass they serve the Camp Wannamango in looks exactly like the quintessential plastic cup. It’s hard to hold as a glass without squeezing it like you would the plastic cup it seems like it seems like it is. Servers are on their game, they know they’re stuff. One of them used the word ‘wicked’, I do not think it was for the benefit of providing the tourists with local flavor. The kid in the rub spot of the bar knows how the bar is shaped. Apparently, they all know but it is not spoken of. They are playing an appropriate amount of Bowie, which is a lot, and thank you. I have a mid 90’s Winter Warmer love for this brewery, I’m glad we recovered Sunday and dropped in.