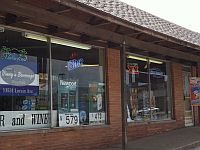 View: Place Reviews
Reviews: 5 | Log in to view all ratings and sort

Never heard of it until the other day. I have been trying to find the Stone Enjoy By 11.09.12 IPA, but everywhere they listed on the website that I called or visited didn't have it. So, as a last resort, I gave Vinny's a call and right off the bat the guy knew what I was talking about, informed me it had just come in and offered to hold as many as I wanted! Needless to say, I was stoked and just visited there today for the first time.

It's pretty easy to pass because it doesn't look like much from the outside and it's in a slightly dumpy neighborhood, but don't let that deter you. I walked in and I asked the guy about the beer and he said he remembered me and had been holding them for me!

Before I purchased I decided to look around real quick. It's a pretty small store, but they used the space wisely. There was an ok selection of wine shitting on shelves and all the beer was kept in refrigerators. They had a decent selection of beers from Stone, Troegs, Fat Head's, Great Divide, and other typical craft breweries, but nothing mind blowing or beyond what a decent Giant Eagle usually has. The one thing that surprised me was the large amount of Belgian beers in stock and the clerk said they had just gotten in bombers of Ommegang Hennepin straight from Belgium!

Even though the selection wasn't nearly the best I have seen the staff were very helpful and friendly, the prices were pretty decent (only $29 after tax for 3 bottles of Stone Enjoy By IPA and 1 bottle of Ommegang Hennepin!) and it's not too far away from me. I'll definitely be visiting them again.

I visited Vinny's during a business trip into the area, my first. It was easy to find, so that made a good first impression. The inside of the store isn't real expansive, but they make good use of their space. There are a number of exclusive corner displays, so it's worthwhile to make the rounds and see everything.

I didn't need much help in buying more than I should have (as usual), but they did let me set my box(es) on the counter while I walked around and filled it. They carry a good selection of the locals (Great Lakes), some PA beers like Penn Brewing, a great variety of Lagunitas and Belgians, and much more. I'd certainly visit again on my next trip.

What a rare find in this neighborhood! Like one of the other reviewers, I would go here before eating Cambodian at Phnom Phen - after i accidentally discovered this place! Good stuff if you are on the west side of Cleveland.

Anyway I was looking to buy some beer before i was off to jam in my old band and so i happened upon this very small store. I was SHOCKED to see the great selection of Belgians, Hefe's, and beers from solid breweries like Ommegang, Boulder and Stone. I didn't think I'd be walking out of there with an Aventinus to go to band practice...plus about 3 other Belgian ales! I mentioned offhandedly that I wished there was a store like this down in Wooster, Ohio, where i was stuck living for a while, and lo and behold, the guy behind the counter went to the College of Wooster, and he ended up giving me a 5th Belgian bottle on the house!

Again, when on Lorain Rd or the west side of Cleveland, stop in and see the fine folks at Vinny's- not only are they very nice, but they are great at recommending beer and wines, too.

Thanks to Tim (Mookow) for telling me about this place and about the fact that they had Stone 8th available. I got the last 2 bombers that were sitting in The cooler. They also had quite a few bottles of the 6/6/6 Vertical Epic Ale available. I also grabbed one of those. I paid a total of $16.09 for these 3 bombers, including tax. All of the beer is stored in coolers. In addition to the usual BMC piss water I saw bombers of Stone, New Holland, Rogue, Dog Fish Head, and othes available. They also have lots of 6 packs from Great Lakes, Bell's, Bison Brewery, Sam Adams, and others. They have 4 packs of several offerings from Samuel Smith and offerings from the Brooklyn Brewery as well. I did see Unibroue, as they also have a decent selection of Belgians available. They also carry a decent wine selection. The 2 guys working there were both friendly and asked me if I needed help finding anything.

What a pleasant suprise stumbling on to this "package store".
I was eating down the street at the Phnom Penh, a great Cambodian eatery sans liquor license, and knew that a Belgian ale would do the food justice. Well, I headed out to "go Fish" and lo and behold what do we have here, thats right, Vinny's!!! Boy was I surprised. They really got it going, good selection of imports, Belgians, Brits, German, Czech, as well as the usual domestic micros and macros. Much to my suprise they had my regular Belgian domestic "Rare Voss" from Brewery Ommegang in Cooperstown New York. It was the right match for "Kari Bonkong Trask" (shrimp curry).
So, check them both out when you're on the west side of Cleveland cruisin down Lorain Ave.

Vinny's Beverage in Cleveland, OH
Place rating: 4.03 out of 5 with 5 ratings