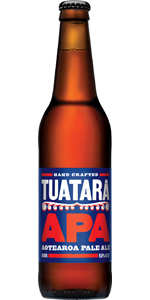 Medium yet fresh throughout the mouth, well-balanced.

This is NZ hops. Great tropical fruit salad notes but with a fruit tartness rather than heavy IBUs to give it a clean finish. Individual hops shine through (or at least I imagine they do.) No pine, little citrus, therefore very much not Cali. A great summer drinker.

500ml bottle. Is the reason for the two entries here the switch between using American-sourced vs. local NZ hops, or just the label change, or a combination of the two? Anyways, this is a new brewery to grace the store shelves in Alberta, and a new species for me to look up - the titular Tuatara appears to be a New Zealand relative of something like an iguana, and he stares out at me from the well rendered cap.

This beer pours a slightly hazy medium golden amber colour, with two fingers of moderately foamy off-white head, which leaves some random islet streaks of lace around the glass as it steadily recedes.

It smells of ripe pineapple, mushy guava, sugary grapefruit, bready caramel malt, and a mildly acrid floral pine hoppiness - all quite enticing. The taste is softly bitter tropical fruits - pineapple, kiwi (natch), and yellow grapefruit, with a stoic, somewhat tangy caramel malt backbone, and a subtle passionfruit and gooseberry fruitiness that screams out NZ terroir (at least in terms of tasty intoxicating beverages, that is).

The bubbles are presently restrained, or maybe it's restrained in their presence? Anyways, the body is a pleasantly plump medium weight, and decently smooth, save a few hoppy pricks. It finishes off-dry, the fruit and lesser malt sweetness waxing, and the bitterness of the hops petering out, with but a few too many indicative death throes.

A rather enjoyable, big-H hopped APA, one where the A for American is shaky at best. Which is the point here, I suppose, in this display of what a foreign, yet true to the original intent, take on a standard can be. Big and hoppy, with nothing really lost in translation, I must say.

Refreshing, crisp beer. Great aroma with Kiwi hops coming through. A pale ale I would look forward to drinking.

O: A fine transformation of an actual APA to a NZPA.

A very slight haze in a golden amber body, slow tiny bubbles work their way to a thin cap that retains well and leaves lots of unorganized lace

S near perfection, tropical Kiwi notes, pineapple, passion-fruit, guava and a little melon and citrus mix well with some caramel and spruce with a hint of pine

M the little bubbles have a pin prick thing going on, leaves just a little behind and has a mild bitter bite with a tropical rind iced tea finish that lingers faintly for a while

O great stuff no questions asked, I could jack up the overall to a 5 to compensate and would have no guilt, fuck it I'm pumping the smell as high as it goes this one deserves a "perfect' somewhere

Dug it! dig it? one of those beers that I could drink all day and the Kiwi hops are kicking ass. I'm still waiting for the South Pacific styles to get some props, New World Pale? South Pacific Pilsner? wait for it these beers are distinct, drink up!!

Bottle from Beer Deluxe. From notes.

A - Poured a cloudy dark gold. Good carbonation, one finger of beige head. Sticky lace and a film of retention.

Poured from a 500ml bottle. Pours a very rich, deep lemony yellow. The nose is almost as lemony! Very strong aromas of bright-smelling New Zealand hops. There's a little spice in there as well. The taste is terrifically balanced between caramel malt flavours and citrusy/peachy malts. This is a really good version of an American Pale Ale made with Kiwi hops.

500ml bottle recomended by the always helpful staff at Brewery Creek in Vancouver, BC.

Appearance. Pours gold with just a bit of amber and a very slight haze with over 2 fingers of foamy off-white head.

Smell. Nice citrus rinds and tropical fruits, a little cedar and pine along with some toasted light grains. Smells like a good american pale ale.

Taste. Good toasty malts followed by some bitter grassy and floral hops. A little citrus and tropical fruit, but quite dry. Some lingering grassy bitterness. The hops taste familiar but slightly different than most apa's.

Overall. A good hoppy pale ale, maybe just a little on the dry side for me.

Bright golden copper in color with a clear texture, the pour yields massive silky white head that stands with very good retention before slowly subsiding to thin everlasting foamy layer atop along with several lacing patch and spot along the way down.

Citrus, grapefruit, orange candy, pine, spice, resin, and slight earthy, all of these aromas are derived from the hops while malt is in the back end with notes of bread and caramel.

Kick off with sweetness and breadiness from bread and caramel malt, hop thereafter overcomes with a solid taste of citrus and grapefruit while pine, spice, and some earthiness are slightly hidden in the second layer. Bitterness is at the almost end with a resiny touch that also a bit lingers in the aftertaste.

The body is medium with smooth mouthfeel and medium carbonation generated some crisp and refreshing feel through the palate, very dry finish that will quickly lead to next sip.

Good pale ale indeed with good hop and malt quality which surprisingly came from 100% local ingredient, so this one is good “NZ” pale ale.

Ahhh, land of the long white cloud (aka the “Aotearoa” in Tuatara Aotearoa Pale Ale). When Kiwi craft brewers put their thinking caps on they really can really knock up some beastly, for a hop lover like me, brews. Tuatara is no exception, and perhaps my favourite Aotearoian brewer [yes I realise I have only tried their Double Trouble, but it was that choice bro]. Now I will taste the might of Pacific Jade, NZ Cascade, Sauvin and Wai-iti hops in all their Kiwi hop glory. Let the tongue lashing commence!

A: Presents a clear golden body with a nice 1cm off-white fluffy cloud head that sticks around quite well. I have deducted a point in the filtering - I likes me beers unfiltered, yarrgh! 7/10.

S: The solid biscuit malt base lends itself well to a variety of hop notes: Tinned pineapple rings, pine resin, citrus, spice and a hint of white wine grape (which introduces itself as Mr. Sauvin). A superb complex nose again Tuatara! 9/10.

T: Flavour is decent enough (which is an Aussie colloquialism that may confuse international readers as it really means “not that great at all”) but lacking in hop promise. A big multifaceted hop aroma actually leads to a mild, but well-balanced, mixture of biscuit malt, citric/pine hops with a vinous white grape mid-palate and a spicy but medium bitter hop finish. It’s missing a bit of oompf in the flavour department. 6/10.

M: The body and feel however is solid - medium bodied with a nice dense carbonation. 8/10.

D: At 5.8% ABV I found this beer lacking in flavour. It annoys me when I get an APA like this that smells fan-*******-tastic! But it tastes like BDM* It’s far too easy and unassuming to compete with the likes of Feral Hop Hog or LCPA, and really if you’re making an APA those brews, in the antipodes, are your target. 6/10.

Food match: It’s right there in Sauvignon Blanc territory for food pairing - light Asian cuisine (a very broad term but you should get what I mean), oysters, white fish, salmon and grilled chicken with asparagus and snow peas.

*Beer Drinkers Mouthwash - my initialism for brews that I could easily down before brushing my teeth - not to be confused with Births, Deaths & Marriages (the aptly-named Australian government department).