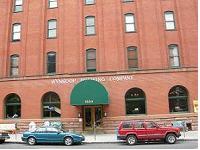 This was my first stop on the Denver trip in August. Located in what they call LoDo, its an all brick building, much like everything in this part of town. I liked the motif, plus this place is huge. Comedy club downstairs, big open brewery area and big ass bar on the main floor, then upstairs is a pool hall. Kind of reminiscient of Phantom Canyon in Colorado Springs (elrogish got married there, cool party). The coolest thing is the downstairs bathrooms look like the cover of the Kanye & Jay Z album about the throne or whatever it was called.

Beers are good, slightly above average. They don't make any one thing that is world class, but they don't make anything less than average, so its a win. Bummed I was a little too early for the Rocky Mountain Oyster stout. The lack of mixing and matching or substituting beers you want for flights was a little weird, but nonetheless, I found one I liked, the one that included the wine barrel sour beer was what I went with. I like that they can a lot of their stuff, Silverback pale is a good tailgate kind of beer.

I think this place offers a lot if you're with a crowd that isn't big on beer necessarily, a good evening out, shoot some pool, drink some beer, catch a comedy act. I'd go again.

A big, well-set-up brewery with a couple bars, a wide variety of beer styles and a nice upstairs area with tons of pool, billiards, darts, etc. The service was okay and the beer was solid,to-style examples with good variety. Excellent location and a great set-up.

My wife and I met a friend here for drinks, Just down the street from Coors Field, it is a nice laid-back place to visit. High-ceilinged with tin, wood floors, big bar, high-top tables. Very comfortable.
Over twenty beers on tap. I had the cask dark mild and the doppelbock, both excellent.
Service was good.
I expect when I visit Denver, I will visit Wynkoop.

This is essential Denver. A late 19th Century warehouse preserved right across from Union Station (which has had an unprecedented regeneration in the last five years.) Started in the late 20th Century, Wynkoop played an important role in fostering Denver's innovative and still rapidly growing craft beer culture. Its founder became Mayor and laid many of the plans for the City's incredible revival as a magnet for Millennials (who also like beer and cool cities.) That Mayor is now Governor... so maybe brewers make better leaders than lawyers. At any rate, a great center-of-the-action Vibe at Wynkoop

I'm told there is service on two floors, but I never got past the bar on the first floor. It was packed at lunch and almost as packed at dinner. Probably some twenty taps of their brews and hosted another five Coloradan breweries. I had a flight of three each time I went there. Servers seemed to enjoy their work and the bartender was very knowledgable. My sandwich I would not have again. The menu looked like standard pub-grub.

By now, there are better pubs than Wynkoop. But a lot like Anchor, you want to visit where the pioneers first started in that city.