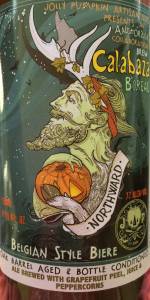 Bottle: Poured a slightly hazy dirty yellow color ale with a nice large foamy head. Aroma of tart notes with some herbal and piney notes. Taste is a nice mix of herbal notes with some sour notes with typical funky Jolly Pumpkins strain and a dry finish. Body is about average with good carbonation. Bottle is a bit old but another wonderful creation from Jolly Pumpkins.

A: Poured into a Duvel tulip to a light golden yellow topped by a dense and rocky two finger white head which retains well and fades slowly to a collar around the edge of the glass with decent lacing.
S: Smells of lemony tartness, some spices, a little oak, some funk and a little horseblanket. A little grassy at times as well
T: Taste is slightly tart and funky with a slight peppery note. Nice spice and slight grassyness in the middle with a lemony tart undertone throughout. On the swallow this beer has a slight grapefruit rind like flavor with some lingering tartness and spice.
M: This beer has a moderate amount of body with a slightly slick and oily mouthfeel. Carbonation is surprisingly low for the style but not too low as to significantly detract. The finish on this beer is quite dry which is overall pleasant and expected.
O: Overall this is a really nice beer. It has some great flavors with a good bit of complexity that make it a joy to drink, This one has aged well and doesn't taste like it has fallen off at all. It's worth a try if they remake it.

Bottle dated 6/2016:
I watched the small white bubble lava flow rise up the neck before I poured. It was very slow, but I knew to pour slowly. With that caution, half my glass was still fluffy white head. The other half was chill haze golden.

Nose is wonderfully funky, with a hint of spice. Barnyard hay, musty wood, funk countered by what actually smelled like carbonated lemon seltzer. How does one smell carbonation? I don't know, but there it is.

Taste starts with earthy funk, joined quickly by a tart grape and lemon note that barely sets foot on my palate before the barn falls over upon it. Fuzzy, but softly so, the horse blanket softening the tiny blows a tad. A citrus zesty, lingering funky bitterness ends the beer, though my tongue still has a tingle upon it - thinking more a light spicy flavor than lingering carbonation.

Quite enjoyable, as many JP beers I've had are. I like the earthy funk. The tart notes aren't strong enough to overcome this, but put up a battle. I could use a little less tart, but only bring it up because you asked.

Pours yellow, with a very light white foam head. Aroma is spicy and sour, lots of brett, pepper, cloves and grape fruit. Taste is complex and not easy to drink, an ale for advanced pallates. Cheers.

Tried in a glass on tap at Jolly Pumpkin. I was extremely excited to try this beer, particularly given the breweries involved, and the story behind the collaboration (and how JP inspired the founder of Anchorage to start a brewery) is tremendous. That said, this beer, while excellent, didn't quite live up to the hype.

There was a distinct brett funk, and good interplay between sour and saison, but the body left a little something to be desired. I was also disappointed that the peppercorn and oak didn't come through more prominently. They were certainly there hiding in the background, but not quite to the degree I would have liked to see. Nonetheless, a great beer, and one well worth trying.

I don't get any peppercorn, no oak aging, not much funk and not a whole lot of grapefuit juice... this is a pretty average saison ale that is not worth the eight-dollar price tag or the great breweries involved (Jolly+Anchorage)

Appearance: Hazy gold orange hue with a thick white head.
Aroma: Grapefruit and barnyard Brett funk
Flavor: Starts off with grapefruit predominantly but then shifts gears into a more pithy and hay-oriented flavor. It finishes with a very slight but very lingering cardboard taste.
Mouthfeel: Nice thin medium body that has a slight carbonic bite that helps the citrus notes pop.
Overall: I was very excited to try this collaboration but it fell slightly short of expectations. The aftertaste of cardboard and grapefruit pith overtook the palate from the actual grapefruit juiciness. The peppercorns were no where to be found.

Pours a hazy straw with a large foamy head. The nose is straight funk with citrus peel. Taste is more citrus zest and mild spice. This is not as sour as I was anticipating from the initial sniff. Surprisingly clean finish. Thin body but enough carbonation to puff it up a little. Nice brew.

Found in Portland at apex bar. Slightly bitter aftertaste, high acid, slight tang in the beginning, like cranberry or tangy fruit? We definitely enjoyed, not our dream beer, but not mad that we ordered a whole bottle. Wouldn't be worried about drinking too much of it like triple karmaliet.