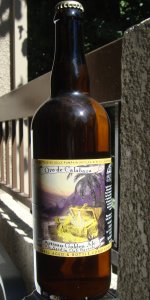 another one i had been dying to try just never got around to opening. split between two snifters and enjoyed while feet where kicked up on the dock.

Rich with a good bit of haze and floating sediments throughout. Very nice color here. There was ample carbonation evident from the very beginning, with streams of bubbles rippling up to the surface throughout the glass. A nice even level of foam, perhaps two inches in height. Nice settle down to a respectable layer across the top which lasted throughout the session and gave off copious side glass lace.

The aroma was very nice. Rich notes of fruit, pears, apples, some tart cherries, but lots of caramel malt smell too. Nice touches of grain and bready tones as well. The flavor was very nice. Rich notes of caramel malts wrapping around and mingling with sour fruits and touches of grain. Some nice fresh grass like hops playing around in here as well as the little bits of fruit just danced around in the back. Interesting feel, well carbonated and a cross between medium and light bodied. I was seriously impressed by the drinkability as it did not come across with the deep funk, letting you noticeably take bigger sips of it even on a hot day.

Overall this was very interesting and a very solid offering

Smell: The oak and leathery funk jump right out, with undertones of lemon, lime, apple, pear and juicyfruit gum

Taste: Lemony/limey and tart from the start, with the oak and leathery funk character dominating; the beer is very dry and grows increasingly tart by mid-palate, with just a hint of the green apple and juicyfruit flavors peaking through; the fruit is more pronounced after the swallow, with a little sweetness, but the finish is very dry

Drinkability: Not my favorite sour, but a very interesting beer that is well worth seeking out

I've rewritten this as I go, just not sure about this thing. Sour, yeast, wood, and farmhouse funk - this beer has it all. Pours looking like a tripel, with sour notes on the nose. Flavor is vinegar-ish at first, but quickly fades to a tart enjoyable fruitish thing. Finish is fairly dry with lingering sour notes. Interesting for sure, but not my thing.

A: The beer pours a lightly hazed golden orange color with a tall white head.

S: A very nice tart aroma of apples, pears, and peaches. Light grass notes to it and some wet oak. A little bit of earthiness and some lemon zest. Still a little bit of malt and a touch of pepper.

M: Medium in body with a medium to high carbonation.

O: Another winner from Jolly Pumpkin. This is a really nice beer.

I loved this beer, it is almost like a modest yet tasty sour.

(A) The aroma is bread and lemon.

(T) Grassy, bready, yeast, citrus, some pepper, it is tart, but there is almost no bitterness, and no hint of the alcohol, which is fine.

S: Lemon and orange zest, Brett yeast that yields a nice funk and a hint of peppery spice.

T: Tart citrus with an earthy funk and a slight breadiness. Lemon and green peppercorns.

This beer reminds me of the orange juice commercial where they strip back the carton and there is pulpy flesh underneath and then a spout is opened and the juice pours ripe from the box. Well, put a keg tap into a bag of Brachs' spicy gum drops with some fine festering yeast and spring water and here's what you have: a tart beer gumdrop. A peppery confection that froths with an infected head. I mean this in a good way. Like when a rich pumpkin pie and whipped cream begin to swirl and meld together from a thorough forking. As with all the Jolly Pumpkin beers they leave you thinking "designer beer" but also, "one more bottle to figure out if I like it." Yes I do.

Thanks to bmanning for opening this bottle on Election Day 2010.

Pours a straw-yellow color with a good white head. A bit of lacing. The is some light grain and straw with a good amount of funk and a slight dose of sourness. There is really great notes of straw and barnyard. The taste is the same, as there is just a light malt character and a really nose dose of hay and blanket. Feel is really fantastic between the funk and some slight sourness. Drinks really well and is a fantastic offering from JP.

Minimally hazy golden pumpkin (oro de calabaza) containing a static storm of fine yeast that add a great deal of character. The crown of foam looks great as well. It's orange-tinted ivory in color, is heavily creamy and is impressively sticky. Gorgeous, shredded veils of lace adorn most of the available glass, putting the finishing touches on a wonderful look.

If I didn't know better, I'd swear I was smelling an authentic BSPA. It must the yeast, although I've smelled plenty of domestic, Belgian-style beer that uses a true Belgian yeast strain that didn't smell this good. The aroma consists of brandy-macerated golden fruits (apricots, ripe peaches) sprinkled with a fine dusting of ground clove. Very well done.

Prior to this bottle, I've reviewed 93 different styles of beer. This is my first biere de garde so I'm at something of a loss as to whether or not it's style accurate. What I am sure of is that it's some kinda delicious! Like the nose, the flavor reminds me most of a BSPA, or even an especially fruity tripel.

None of the three Jolly Pumpkin beers that I drank prior to this one prepared me for such an incredibly complex flavor profile. Puree of orchard fruit flecked with inviting, exotic spices lulls me into a contented complacency, while warming fruit brandy mixed with golden rum provides a breathtaking blow, like a velvet-gloved fist to the solar plexus. What in the world did these guys do to this beer that they failed to do in all the others?

I'll give most of the credit to the yeast strain; it's obviously an ass-kicker of the highest order. Even though Oro has the highest ABV of all the JP offerings, it's the least alcoholic in terms of flavor. That may be because it's been aging the longest, but I don't think so. I think it's simply a superior brew. It melds and mellows even more spectacularly with warming. The beer is becoming barely cool, I'm the one who's actually warming.

The mouthfeel is medium-full with a wonderfully lush silkiness. Or is that a silky lushness? Once the initially peppy carbonation settled down (by the second glassful), the mouthfeel came into its own and really began to impress. Any lighter and the flavor wouldn't be able to get comfortable on the palate. Any heavier and the sweet stickiness would edge over into syrupy, which would not suit the beer at all.

My three previous Jolly Pumpkin beers were disappointments, at least relative to the hype. What I expected from them is what I finally got from Oro de Calabaza. This is an outstanding ale and instantly joins the handful of great Belgian-style offerings that I've had the pleasure to drink, no matter the country of origin. A big thank you to deejaydan for the bottle.

T: Sweet malt flavor up front that is mixed with an apple/citrus tartness and bitter funky yeast flavor. Finishes semi-dry with a vanilla/oak smoothness to it and a touch of alcohol flavor and burn.

O: A well crafted, very tasty beer that would go well with just about any meal....I would say linguine and clams. Has a lot of crisp white wine-like qualities but more way more flavor and depth due to the wild yeast. Very refreshing and drinkable!

Pours a hazy, dirtied orange color with a 3 finger head taht falls rather slowly to 2 fingers. As I pour it, I get banana aromas. Taking a deep inhale off the glass, I find lemoney and spicey aromas. There are hints of musty barnyard aromas, but I would like a little more in that vein. The flavor is interesting. I get lemon, slight cidery, light barnyard and even a touch of banana. Very complex. Very clean. Very good. The feel is moderate with a moderate to active carbonation. No hint of any alcohol in this. Highly enjoyable. I'd like a little more funk going on, but I can't really complain at all on this one. I'd definately drink it again.

Hazy yellow color. Lemon, slight brett funk. On the palate, dry but with a boozy sweetness that lingers. Bright acidity in balance. Light but not thin. Tad bitterness in finish. Seems to be just a stronger version of Bam, which I still prefer over this.

Poured a nice straw color with a good size head. Nose is a bit floral...nothiing overpowering. Carbonation was moderate to light. If I had to pick a fruit, it's Sour apples more than anything up front. Nice mouthfeel. Packs a bit of a punch. As someone else noted, it's almost like a white wine. As a sour fan I approve