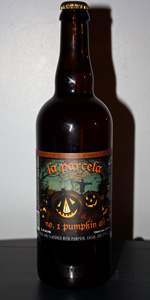 Notes: Packed with real pumpkins, hints of spice and a gentle kiss of cacao to lighten the soul. An everyday easy way to fill your squashy quotient. Only available for a few short months. Not to be missed.
View: More Beers | Place Reviews
Recent ratings and reviews. | Log in to view more ratings + sorting options.

Poured out of a 16 oz. can into my tulip glass, this beer pours a fairly cloudy/hazy medium copper/amber color with lots of little bubbles fairly rapidly and continually rising to the beer's surface. Has a slightly off-white head that's about an inch thick when first poured. Head settles eventually to a film layer of surface coating with a very thick lining the inside of the glass at the beer's surface and very nice lacing. Aromas of some bready malts, pumpkin and some wild barnyard funky and earthy notes that's followed by some baking spice/all spice. The think it is the oak that gives this beer it's earthy quality. The taste is pretty much the same, w/ some bready malts, pumpkin sweetness, baking spice/all spice, some earthy oak notes, and some wild barnyard funky that give a nit touch of sourness. Very balanced flavor profile here too. Quite excellent. Has a crisp, smooth, medium to full bodied mouthfeel with moderate carbonation. Has a clean, somewhat dry finish. A very good beer here overall.

From Untappd, had at the brewery.
First I need to say that I'm usually not a big fan of pumpkin beers so I could be biased
Very Subtle with sweet tart spiced cinnamon pumpkin

La Parcela is a good looking beverage. It fits the season with a dulled copper body and rustic Autumn highlights of dulled and bright orange both. The head takes a high pour to get going but when it does it's the purest of whites, finely bubbled, and sticky in its wake. The foam eventually falls to a skimming and chunky ring but never disappears.

The nose is interesting and appetizing. It's slightly acidic and slightly earthy off the bat. I guess I could see the earthiness being contributed to a gourd but I probably wouldn't guess it if I didn't know. There are soft baking spices on the periphery; crystallized ginger, nutmeg, cardamom. A healthy squeeze of lemon runs the middle and not only brightens the beer but makes the mouth water as well. Can't say I'm getting any cocoa nibs but what I am getting is good.

The flavor opens up beyond the nose. That squeeze of lemon has a noticeable acidic kick from start to finish that's as bright as you can get. Crystallized ginger and a melange of other, indistinguishable soft baking spices add some depth. There is also some vinous acidity along with an embracing oakiness. The gourd is more noticeable on the palate and, it's on the swallow. All those components come together on the finish for a damn good drink.

The body is light with a snappy effervescence. As a matter of fact this beer moves quickly but it manages to reach every nook and cranny. A buzzsaw of acidic tartness runs the middle of the tongue while the finish dries out quickly with a soft, lingering acidity. This beer is amazingly drinkable.

This beer is as Autumn as you can get for a spiced, sour beer. It's none of that overly done pumpkin latte type nonsense though, don't think that. It's nuanced and bright. The spices are in the background, mild, and complimentary. The tartness is well done. I could drink a lot of this beer.

This might be a 2016 bottle, but damn, it held up extremely well and if it did like I said, what better way than to talk about it here.
Damn straight! Bottle from Winooski Beverage, VT.
This was poured into a tulip.
The appearance was a semi-rugged dark orange color to somewhat flow into a low lying depth of brown color. A nice looking foamy two finger white head sat atop and slowly dissolved to leave a disenchanted messy lace.
The aroma is quite magical as it melds some sweet pumpkin with a slight baked sort of crust-like pie subtle character with some spices of allspice and clove. However, these spices seemed "baked" - perhaps with a subtle roasty to toasty warmth. A blended sour to tart meshing with some orange zest-like quality came in closer to the end.
The flavor starts with the pumpkin and flows into the sour character fairly quick. Mild toast to some breadiness with some sour and tart tastes. Cacao and dark toast subtle sweetness shows up here. Barely any aftertaste but seemed slightly sour with some lemon, then orange zest and a touch of pumpkin.
The mouthfeel was between light and medium bodied with a fair sipping quality about it. Some sour harshness seemed to prickle my tongue but appropriately. Good carbonation and ABV. Mild finish of pumpkin, then sour, a touch of tart and that "baked spiciness" that comes across so mindfully awesome.
Overall, any brewer out there that wants to brew a pumpkin sour ale, this should be your standard. Or maybe I just had this on the exact day it should be opened. If anything, thank God for the stars aligning for this one!

Had at jp Detroit. Good but not super sour. More pumpkin/Tammy than sour

Clear, copper colored beer with a lasting white head that leaves spots of lacing. The aroma is tart acidic vinegar, with faint pumpkin spices and a lot of chocolate. The taste is pleasantly sour with a ton of cocoa flavors. At the end a bit of pumpkin spices come in with a little malt sweetness. Very nice beer.

A: Orange cloudy, with fine bubbled carbonation, 5 fingers of yellowish head. It was a huge gusher from the beginning.


O: On the bottle they joke about how ‘Jolly Pumpkin’ never had a pumpkin beer, until this one. Its great. How can you make a pumpkin beer even better, make it a sour pumpkin beer and you won me. Got this in Grand Rapids, MI, drank in Muskegon, MI, Aug 16th, 2014.

Poured into a pint glass at 45 degrees. Appearance a deep amber color with orange and reddish tints. The ber is slightly cloudy. with carbonation bubble erupting from the bottom. A hard pour gave a thin light tan head with no retention.

The mouthfeel is slightly creamy, medium body and lightly carbonated.

My first reaction to drinking this beer was unexpected. I was not expecting a sour note, but I gotta say I really dig this beer is wonderful tasting, beer lots of flavor and balance. I will finish enjoying this beer.

-750 ml bottle from ~2012 This poured a clear, deep orange (but a bit cloudy at the bottom of course). Aroma is a bit acidic, and a bit flowery with spice, especially at the bottom of the pour. The flavors were slightly acidic, vegetable, malt...okay, not helpful, but I would like to have this every week. My wife (who will taste any brew to be accommodating) exclaimed this as her favorite wild ale despite her other preferences.