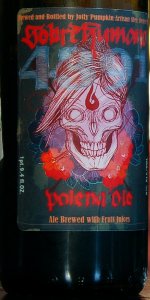 Notes: Sour, barrel-aged version of the beer by the same name. Brewed in collaboration with Maui brewing.

Yes, Michigan and Hawaii are connected. It should be obvious to you now, as you hold this beer, and read this label. John and I designed this beer with two noble fruits from two noble states, Michigan & Hawaii. Cherries and liliko’i. Starting to see the connection? I feel it. So does John. 4391 miles may separate our breweries, but no our thirst for the exquisite. Hipa! -Ron

Working with Ron is something I’ve always want to do since I had my first Jolly Pumpkin beer. Years later, it’s a reality. Being involved on this project was an honor and a privilege. Mahalo to my MBC crew and to you, fans of craft beer! -John

This brew was shared with us, with a big thanks to StonedTrippin. It poured a caramel coloring, letting up more reddish golden hues around the edges. It held a soapy, tannish head of one and a half fingers. This retained decently, but was easily reproducible. Big bubbles of lacing were left dripping down the glass. There was a moderate haze throughout, with tiny flecks of sediment bobbing about. Carbonation appeared to be medium. The nose gave a hearty malt base, with cooked caramels, white chalk, light wheatiness, and toasted pumpkin seeds. Soft hops came to mix with grassiness and nectary sweetness. Fruit came out much more with warmth, giving both sweetness and tartness. The former was in the form of tropical juiciness of the Liliko’l, which was much like pineapple, with a bit of dehydrated mango twang. The sourness on the other hand was brought in full by the cherry inclusions, mixing with the funky, biting Bretty yeastiness. Our first impression was that the fruit was very forward through the flavoring, but the mix was kept nice and light, and very drinkable. As we sipped, the flavoring opened with an immediate clash of toasted pale and caramel malts, and the tropical juiciness and tart soured Michigan cherries that were so freshly aromatic. Dry oaky bite mixed in, pulling us to the peak where the independent tartness of yeast hit its maximum. The fruit lightened up through the end, but added residual dextrin pucker amongst the continued funky yeast, mineral, toasty caramels, and faint diacetyls. The aftertaste breathed of tartness, solid cherry bite, yeast, light barnyard Brett, and pale metallic malts. The body was medium, and the carbonation was medium. Each sip gave soft slurp, sip, cream, and froth, with big pucker. The mouth was initially coated with oily creaminess, with oaky dryness and tart, tannic astringency. The abv was fine, and the beer sipped nicely.

Overall, what we enjoyed most about this beer was its lightness of flavoring. This is not to say that the flavoring was weak, but rather the blend of malts with the juicy airiness of the fruit, light oak, and solid tartness made for a nice blend. This also helped the ease of drinkability, putting this guy far from a slow sipper. The froth and slurp were nice on the mouth, and nicely contributory. If we had to knock something it would be the nose, as the fruitiness there tended to overpower the malts, hops, and especially the woodiness. We haven’t had the pleasure to have the Maui version, but we love the idea of this, and believe it was well executed.

O - Tart cherry, mild. Much better than the Maui version, by far.

A: half finger head on a cloudy amber with slight golden hue body.

T:cherry tartness which is mild on a toffee and caramel malt base. There is a mild citrus presence as well. This is a very simple brew.

Overall: this makes a better fruit beer than a wild ale. Its actually a little boring. I expected more.

Wanted to try this and see how it compares to the Maui version. Plus I always need to know how many bottles to buy. Into New Belgium globe.

A - A finger or so of very red head (still light). Body is cloudy and mostly orange with slight red. Great lacing.

S - Whoa. Tons of real grapefruit, like spot on. Lime and green berries.

M - Nothing special but decent carbonation. Body is a little light, but still good.

O - This was a real surprise. Not expecting that strong fruit flavor and only slight sour. Can taste a lot of Hawaii in this (unlike the Maui version). Refreshing and a nice summer brew.

SaisonRichBiere, May 02, 2013
Sobrehumano Palena'ole from Jolly Pumpkin Artisan Ales
Beer rating: 92 out of 100 with 360 ratings