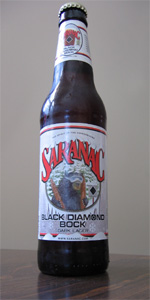 Notes: Saranac Black Diamond Bock is a rich, malty brew, made with traditional German malts and hops and fermented with a lager yeast. Aged for months for a rich but smooth malty taste. A nice reward for enduring your winter months.
View: More Beers | Place Reviews
Recent ratings and reviews. | Log in to view more ratings + sorting options.
Ratings by bros:
None found.

Rated: 4.24 by OKCNittany from Oklahoma

3.63/5  rDev -1.4%
look: 3.25 | smell: 3.25 | taste: 3.75 | feel: 4 | overall: 3.75
Pouring a cellar temp bottle into a pint glass. The beer pours a clear chestnut hue with no carbonation rising to surface and minimal edge layer of tightly packed head. Aroma is rich deep malt with some brown sugar and a toasty caramel. No real hops that I pickup here.
First sip reveals an average body with fine tingly carbonation that tickles my palate on each sip.
Makes the beer physically enjoyable. the flavor is sweet malt through and through. Brown sugar, caramel, a little roasted malt, some almond or nutty flavor. No hops or booze anywhere.
Definitely a malt lovers brew, that I am having no trouble drinking easily. Not a complex or crazy beer, but enjoyable for what it is and little o the sweet side without being cloying. I enjoy this one.

Reviewed by tbruchey2112 from Maryland

Reviewed by CloudStrife from New York

A: Pours a clear copper with a 1.5 finger puffy white head. Fairly large bubbles in the head, just a touch of visible carbonation.

S: Fairly light roasted and fruity malts. A breadiness as well as almost a hay like grassines.

T: Malt forward with a hint of sweetness. Some carmel malts are what make it sweet I think. Not too much hop backing.

M: Medium bodied with average carbonation. Isnt too sticky which is a plus for this style. Pretty easy drinking.

Overall an average beer that works well in the winter season. Wouldnt seek it out on its own but has its place in the winter mix pack.

A - Pours a nice clear dark amber brown with a 1/4 inch of head that sticks around to a great lace ring which is excellent.

T - Toasted grains and caramel lead with peppery hops and a smooth finish. Not bad.

M - Medium, chewy, and quite a dry finish really.

Overall pretty on par for the style but didn't really wow me. Pretty good for Saranac though.

Reviewed by vicg12 from New York

4.88/5  rDev +32.6%
look: 5 | smell: 4.5 | taste: 5 | feel: 5 | overall: 5
Saranac's best beer. Was brewed for limited time last winter to go with ski season but now since it was in such high demand it is an all year round brew from what I am told. Dark heavy beer but with great flavor and good drinkability. Even the label on the bottle is fun to look at, depicting a bear with skis, Saranac trys to encorperate bears into all thier labels it seems. Def. give this one a try, you will be happy you did.
Sep 22, 2009

Reviewed by ClockworkOrange from Pennsylvania

Reviewed by CrellMoset from Virginia

Appearance: Pours a slightly hazy, dull brownish amber with minimal and lazy effervescence. The initially two-and-change-fingers of tan, marshmallow-like head fade rather quickly, though they do leave plenty of nice, sticky lacing and a big, thick, foamy collar of lace. A good start.

Taste: A rather soft and subtle malt profile on this one. Brown sugar, caramel, and gummy bears mix with milky, light coffee and a few stray fruity notes, largely sweet but slightly tart in their own dull way. It seems fairly well-rounded, but just a little subtle.

Mouthfeel: Mild, soft carbonation in a slick, even mouth. A little thin, perhaps, approaching but not quite reaching watery.

Drinkability: Stylistically, this is definitely a bock, and even a pretty good one at that - can't say it's the best one I've ever had though. The notes are mostly here, it's just a little dull, shallow, watery - cheap? No, that's harsh. It's good for what it is, but it's not one I'd reach for again.

A: Deep amber with a cherry hue to it. A fabulous, sparkling and foamy head, just over 2 fingers tall. Recedes in rolls, leaving plenty of sticky lacing behind.

S: Very malty... I get something that kind of reminds me of pancakes out of it. Fortunately, that's a nice smell!

T: A rather pleasant tasting brew... nice caramel malts, just a hint of smokiness, and a little bit of an herbal touch.

M + D: A little bit of a stickiness in the body, an assertive - but not overdone - carbonation. In the past, I've always detected an unusual 'metallic' type taste that I had just associated with being a Saranac thing. It wasn't really my thing, but this particular beer doesn't appear to have that quality. Quite a nice brew which has me interested in revisiting other beers from the brewery!

Reviewed by eporter66 from New York

A - An amber/brown appearance, poured to a nice finger head that receeded quickly. Good lacing on the glass

T - The malt is the overriding but not overpowering taste. There is a hop bitterness, but not heavy at all

D - This is a very drinkable beer, and I guess I was always figuring this to be a heavier stout from the black diamond name. Never looking closely to see that it was actually a bock and not a stout. This could be a session beer, it is not heavy, and has a good flavor.

Reviewed by yesyouam from New York

Reviewed by JamesS from Indiana

4.15/5  rDev +12.8%
look: 3.5 | smell: 3.5 | taste: 4.5 | feel: 4 | overall: 4.5
Pours a very nice brown color, although with very little head, but a bit of decent lacing. It has a very caramelly scent, but it's so overpowering, that's about all that comes out, besides a slight alcohol whiff. Excellent taste, though! Very deep and filling, nice and malty with great caramel flavors and a nice aftertaste glow. It goes down well for a thick bock, too.

I also find it humorous that they label it a 'dark lager' on the bottle. It's true, but it seems like they're trying to get macro lager drinkers to not be scared of it.