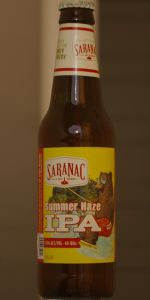 Another variety pack for me. What else is new? First up: hazy IPAzy. On the nose I get grapefruit, lemon, and sweet bready malt. No hops until it hits the tongue. The flavor is very citrus-forward with a long-lasting bitter finish. A bright tang coats the tongue with each sip. It keeps me coming back for more. I was surprised with how much yeast is present in the smell and taste. I haven't seen that in an IPA until now and I don't mind it. It's smooth and easy to drink with low to medium carbonation. Given the name, I was expecting a simple run-of-the-mill summer IPA. This beer isn't that. It's much more interesting and enjoyable.

Pours hazy, gold in color with one inch head. Taste is big guava and orange juice. Light bodied, slightly bitter with moderate carbonation. Had no expectations going in and this one is actually really enjoyable. All the great flavors of a neipa but not much acid. Smooth, tropical and super easy to drink. Will finish off these quick.

On tap at The Old Toad in Rochester, NY.

This one pours a mostly clear (not hazy) golden yellow color, with a small head, and lots of lacing.

Compared to what you expect from the name, this hits basically none of the expected point. It's not hazy or juicy, it's just a somewhat standard West Coast IPA type thing, with piney but clean hops, and a strong malt character.

This is light bodied, crisp, and pretty clean, with a good drinkability.

This isn't at all what it's described to be, but it wasn't really bad tasting. The final rating falls somewhere in the middle.

Dull hazy and darker golden with a big white head, looks pretty decent. Tropical and citric and sweet although not of the potency I would desire on the nose. Decent mix of sweetness and bite again with just less there altogether. Medium thin feel with less carbonation and slight lingering bitterness.

This is a high performing summer beer. Definitely up there in terms of quality and was a great pick up. Not sold in Mass but grabbed a case on the way home from upstate New York and it was a great decision. With hints of mango and orange goodness this IPA remains light and drinkable. It’s has an initial bite and a smooth finish. If you can find it, buy it. Definitely could have more than a couple in a sitting

Poured from can into pilsener glass.

A: haze, but not murkbomb. 1 finger fluffy white head, active carbo. No significant lacing. Thin 2mm full profile disk of head goes all the way to the last sip.

S: mild notes of lemon-lime citric tines with no malt and a light peppery yeast just hiding out in the back.

O: solid sipping on a hot day but that ABV would sneak up.

Having finished one small brewery horizontal of four (4) beers, here goes the next brewery horizontal. The Bottle Backlog here at Chez Woody is not as extensive as its CANterpart, but it has been annoying me for long enough that I am attacking it with gusto! This will be one of the rare insCANces when I CAN CANduct a back-to-back Bottle vs. CAN review!

I happily Pop!ped the cap & gave it a slow, gentle C-Line pour as one of the fresher Bottles that were hanging around. It foamed up beautifully to form just under two fingers of dense, foamy, rocky, light-tan head with very good retention, slowly falling away while leaving nice lacing in its wake. Color was an oh-so-slightly-hazy Golden-Amber (SRM = > 5, < 7) that I might have chalked it up to a chill haze, had it not been for its name. Nose had an odd peach-grapefruit combination quality. I'm not sure that I have experienced it before, but it was at least interesting. Mouthfeel was solidly medium. Right on par for the style. The taste was more like liquefied peach cobbler than grapefruit citrus, although I still got some slight bitterness. I applaud their choice(s) of malt(s) & I would wager that biscuit malt & honey malt were both included in the malt bill. That may be a clue as to the bear's inclusion on the label. It did not taste of fish, but it certainly tasted of fresh fruit & honey! Mmm. Its relatively low bitterness made it less-than-satiating for me as a self-described, self-avowed hophead, but they were up front about its bitterness, so fair dinkum. OTOH, it was eminently drinkable & just the sort of thing that a bear would stuff into his river-bound cooler in the Summer. Many humans would also, I'd wager. Finish was semi-dry, very pleasant & very drinkable!

Now, if they would just put it in CANs … Wish granted!

Right off the bat, CAN gets high marks for its graphics! The bear is not fishing, but waterskiing! It was not obvious on a paper label, but on a direct-application painted CAN, it jumped out.

I Crack!ed open the vent & was pleasantly surprised by a spritz across the fingertips due to its being a brimful CAN. 8=) I celebrated with a solid C-Line stream Glug into the awaiting glass. This resulted in the formation of two-plus fingers of dense, foamy, rocky, eggshell-white head with good retention, slowly falling away to wisps. Color was a lightly-hazy Yellow-Gold (SRM = 4 - 5). Nose still had the curious peach-grapefruit CANbination. Mouthfeel was solidly medium. The taste was less peach cobbler & more fruit salad with peaches, pears, grapes & pineapples baked into Bisquick mix using a Dutch oven. It was a Boy Scout treat that we used to make on the last night of a camping trip & this beer was very evocative of that dessert. Mmm. Again, a very nice malt bill to acCANpony the hops. Mmm. Finish was semi-dry & highly refreshing. The bear & I are putting this in our cooler & headed to the river this Summer, if they ever let us out! YMMV.

This one was a bit of a toss-up. The malts tasted the same in both, but the fruitiness was just slightly different between the two. If aesthetics count for anything, then I am giving it to the CAN. Otherwise, it was a draw.

Poured medium hazy light orange with white head that dissipated fairly quickly. Aroma is fruity and fresh. Taste is balanced with toasty wheat flavor and plenty of tropical fruitiness and a slight hop bite. Feels a little thin and finishes crisp. Super easy to drink. I like this one and would buy it again.

i found this refreshing for a hazy, a real summery drinker as the name suggests, and not even all that hazy as they go, nicely carbonated and dry too, important in the style for me, especially if i want to drink a bunch of them. set and setting can make a big difference too, and being literally in the lake as the sun was going down with my dad and brother was tough to beat here, but the beer would stand up in a walmat parking lot too. its got a simple and clean hop profile, some needed bitterness to help be drink snappy at the end, and a relative lightness i have rarely known in the style. they did a nice job keeping the malt down, pulling some tropical character out of these hops, pineapple and grapefruit for me, and overall, the beer is quite well refined, i think the recipe has some legs. its a shame it has that saranac metallic tang to it that so many of their beers have, especially the hoppy ones, i think its an old english yeast strain going a little weird but as a house flavor now i dont really dig it. its not huge in this though, and doesnt really ruin the beer or anything, but folks will recognize this element for sure. a fun one to pass around in the fortunate setting i was in, but also one of the better hop forward beers i have had from these guys in many years now. good stuff.

Smell: It has aromas of stone fruit with some grainy sweetness.

Taste: The flavors have a combination of stone fruit, a bit of herb, and some grainy sweetness. There is a touch of lemon as well.

Draft: Poured a hazy bright yellow color ale with a large foamy head with good retention and some lacing. Aroma of citrusy undertones notes with faint residual sugar notes is enjoyable. Taste is also a great mix of citrusy undertones with some faint residual sugar notes and light tropical notes are also perceptible. Body is about average with good carbonation. Enjoyable IPA with good drinkability.

S: Citrus and grapefruit. A bit of pine maybe.

O: Average at best... not offensive but nothing to really recommend it either. Depends on the situation and price point as to whether I'd have another.

Poured out of a can producing a nose of malt and pine with a touch of spice. It has been a while since I have had a Saranac brew and this one is decent but not great. The look and feel are right but the taste is a little boring and watery in the middle. Could use a bit more bitterness in the flavor profile. This is drinkable but a bit of a light IPA to me; kind of your Dayblazer or All Day IPA type thing.

Just a phenomenally crisp, refreshing summer brew from a very consistent brewery. It’s got that citrusy, tropical feel with just the right amount of hops to create a wonderful balance.