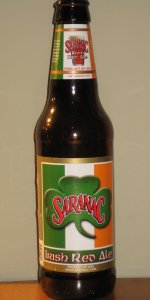 Saranac has been strutting their stutf with a spring case that included a pilsener and this Irish red ale. Pours red. Copper fire with orangey tones. Absolute clear perfection. A tan creamy head that fell pretty fast but you don't mind watching. Nose is biscuit and caramel. A light nuttiness and a some light hop herbal. Woody earthy hops. Drinks so easily. Dry biscuit little bit of smooth caramel and that woody herbal hop. A light fruitiness that is faint enough to remain pleasant and not lend too much sweetness to the perception. A wonderfully mild beer with an easy bitterness that just finishes it off. Lingers a touch on the tongue. Malt finishes the beer. Gorgeous color!

Pours a nice amber red. Sweet caramel smell. Tastes of caramel and toffee, and maple syrup. Feels mildly smooth in your mouth. It's a good beer for drinking while eating food. The mild bitterness contrasts hearty meals very well. Not much foam when poured which is nice indeed. Overall a good beer.

Poured a 12 oz bottle into a clean pint glass.

A. Orangey and red amber color with about a finger of white bubbly head.

S. Smells of malts and some hops with a little bit of caramel in there.

T. Rather average taste with a body of malt and some nice subtle hop flavor with a nutty undertone.

M. Clean and crisp on the tongue with very little aftertaste.

D. I could put a sixxer of this away without a problem at a party. Not an extrodinary beer but an average red ale that I wouldn't look past at the store.

Poured to a red-amber color. From my vigorous pour I received a thick, tall head which dwindled quickly but stuck around from there on. Sweet malt on the nose. Sweet flavor as well. Hints of sweet caramel. Develops into a light hoppy bittterness in the finish. This was an average beer for me. Nothing really stood out for me. It wasn't bland. Just a sweet beer with no real strong flavor. Probably won't get this one again.

Had on tap from our recently built kegerator, knicknamed Kegasus. It was a little old but I've taken it into account along with when I've had it previously but not reviewed it.

T-Rather malty. Lots and Lost of Malt. Also some caramel is in there as well. Not much in the way of hops.

M-Medium bodied, not much carbonation.

O-Like most everything from Saranac it is ehh. However I prefer this Red Ale to Sam Adams. With a choice between the two go with this one.

A: Pours a deep red red that is clear with no real head to speak of.

S: Mild malt with hint of grain. Not much here.

D: A bit on the tame side but good for a couple.

Pours a clear dark reddish-orange with a foamy khaki head that settles to wisps of film on top of the beer. Small dots of lace drip into the remaining beer on the drink down. Smell is of toasted malt, nut, and caramel aromas. Taste is much the same with toast, nut, caramel, and fruit flavors on the finish. There is a mild amount of bitterness on the palate with each sip. This beer has a lower level of carbonation with a slightly crisp mouthfeel. Overall, this is an above average beer that is drinkable, but the smell on this one is slightly better to me.

A: Not much of a head when I poured this and what did appear went away quickly. The color of this beer is great. A dark red color with a little brown, but super clear.

S: I really don't get much here. Nothing standing out to me. I don't get any hops, just a little maltiness.

T: Very heavy on the malt side. I instantly get the roasted flavor and sweet caramel note. Finishes with a slight bitterness and alcohol taste. Not really blown away here.

M: Medium mouthfeel. Mine was a little too carbonated.

D: The carbonation slows ya down a little, but it never feels too heavy. I would pick up a six pack for a night.

Side note: I went to see Umphrey's Mcgee this summer at the Saranac Brewery and in between sets they were giving out free Irish Red.

Overall this is a pretty basic irish red, nothing really stands out from this beer but for 3.99 a six pack I might find myself drinking it again since it has some flavor to it.

A- It looks like beer...JK, it has a nice dark amber almost chestnut color, with a frothy to finger head.

T- Malty tingle on the tongue, with hints of toffee, caramel and touch of bitterness from the hops on the end.

Something like whole oats and dry hay in the aroma
Tart and foamy, nothing to hate, not a hell of alot to get excited about. A little bit watery though not exactly thin. If i knew more about irish reds than i may have a different opinion, but this is kinda plain. Crisp like a lager almost, only the malts have apresence. My bud says he tastes soy sauce but i dont know about that.
Easy to drink but not very inviting

A - Poured a nice amber color. Nice white head, not too big, not much lacing. Crystal clear.

T - Nice caramel taste, a bit tangy. Overall heavy on the caramel, and just simply tastes like a fall style beer would.

Pretty decent beer. Not my favorite Irish Red Ale but I would definitely consider getting it again. It came in te fall seasonal variety pack for Saranac. It's a pretty well made fall beer.

Not bad, esp. for game day.

This beer had a medium creamy tan head with a very dark red body. The smell didn't have much of a hop aroma. I was picking up a slight yeast smell, but also toffee. This beer is lightly carbonated witch fits well with soft undertone of Carmel and toffee. I believe the toffee is however more noticeable. The beer seems like a light Irish RED or watery to me. I was expecting this beer to be bolder. This Irish Red is drinkable, but not something I will buy again.

Appearance - A deep red-brown color which formed a nice billowing white head upon pouring. It persisted for some time before giving way to a thin film on the brew, leaving just a bit lacing on the glass.

Smell – A light sweet aroma of caramel and a bit of malty breadiness. The aroma is relatively light and not too potent.

Taste – After sampling the aroma I didn’t think it would be too much, but actually this had much more flavor then I would have expected. Biscuit maltiness, mixed with a slight bit of caramel starts the taste. The caramel flavor intensifies as time goes on. A nice flavorful beer at only 4.5 % abv. The caramel maltiness makes it very tasty.

Mouthfeel – The thicker caramel and bready backbone of the brew seem to bolster this beers body making it relatively creamy. It has a very nice level of carbonation, which when combined with its body makes it very drinkable and enjoyable.

Overall – This is quite a nice brew. Very flavorful and drinkable.

Pours a pale amber with a reddish hue. There's a 1/4" of foamy head. Good retention. The nose has notes of caramel malt and a diacetylic creaminess. The taste is much the same; creamy, caramel, smooth. The mouthfeel is smooth, light, and mildly carbonated.

Not bad. Overall, well rounded and smooth. Not a bad take on the style.

Taste- Hops come through about mid palate, I get the traditional Irish Red taste, but something seems off balance. Mouthfeel is pretty good, drinkability is about average; The hops seem a little off.