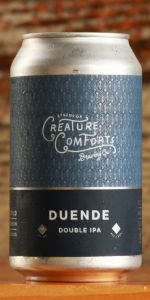 Notes: Duende is a hazy marigold in appearance with fluffy white foam. This beer is elegant for a Double IPA which leads to surprisingly easy drinkability. First impressions are a bright almost citrusy pine note that quickly switches gears to huge fruit notes: orange, grapefruit, apricot, and tangerine. There’s a consistent fruit flesh flavor to the beer that adds a wonderful complexity to the bright citrus notes as the overtones dance around the fleshy notes, supporting without ever getting in the way. As the flavor finishes there’s subtle earth and berry notes that come through and the beer finishes with a perfectly balanced bitterness that rounds out the alcohol sweetness and immediately invites you to take another sip.
View: More Beers | Place Reviews
Recent ratings and reviews. | Log in to view more ratings + sorting options.

Taste: Papaya, guava and peach forward with hints of melon; citrus pith emerges, in the middle, bringing moderately dank and bitter flavors to the finish

Reviewed by donspublic from Texas

4.17/5  rDev -5.9%
look: 4.5 | smell: 3.75 | taste: 4.25 | feel: 4.5 | overall: 4.25
Poured from can into tulip, good 2+ finger cream colored head, good retention and great lacing. Bright hazy golden in the glass. Citrus, pine and some hop astringency on the nose. Taste is sweet malt, candied orange, pineapple, pine and some dank notes in the middle. This beer is past its due date (gift from a friend who doesn't check dates) but it is still drinking good. Where in the beginning I was getting more dankness/ripe pineapple, it mellows out as it warms. Finishes on the dry side with a good grapefruit pith bitterness on the finish. Nice beer, would like to try this when it is a little fresher. The rest of this 4 pack has moved to the front of my beer fridge
Jun 29, 2021

Reviewed by MagicJeff from Georgia

4.27/5  rDev -3.6%
look: 4.5 | smell: 4.25 | taste: 4.25 | feel: 4.25 | overall: 4.25
Look: Beautiful body. Golden straw with a nice off-white head retained throughout drinking. Spider lacing throughout glass as I consume. Some hazy sentiment at the base of the glass.
Smell: Candied oranges. Pineapple. Peaches. Slightest aspirin-y floral, grassy, piney notes.
Taste:Nectarine and navel orange notes. Kind of a dryer finish like a orange juice mimosa. Grapefruit pith, tannin-like finish. Very complex.
Feel: For me, the Dryer finish makes this not as quaffable as some other people are saying. And I definitely get a slight alcoholic burn on the back end. I would love to have this paired with food at a good restaurant to see what the chef/beverage director came up with.
Overall: Most excellent offering from CC. I think this will be one of their most popular offerings going forward. Accessible to people who might be hesitant to a hazy IPA but also complex at the same time. Great beer.

Reviewed by Newtobeet345 from Georgia

L-hazy yellow
S- apricot, grapefruit and orange come bursting through
T-same as scent but a slight sweetness on the finish to complement the fruit. At 8% you could get drunk quite easily
F-just a good feel, nice carbonation
O- a really nice beer for someone who likes a fruit forward beer

Smell - The nose was a bit like orange sherbet.

Taste - The profile had a pleasant bitterness with a nice orange undertone. There was a creaminess that brought to mind sherbet. The finish became progressively more bitter after the initial sweetness.

Mouthfeel - The body had was viscosity and low level carbonation.

Smell: Guava and pineapple, sliced scallions and peppered citrus, gooseberry and muscadine all atop the usual raw grain component.

Taste: Smooth, creamy raw graininess with the tropical and citrus vibes from the aroma as well as the mild onion, spiciness, stone fruit and berries. Slight pinch of bitterness. Tangy acidity. Juicy and herbal as it picks up some raw graininess into the finish.

Big thanks to Mark for this one!

Nose: A typical modern pale malt base sits beneath huge aromas of Citra and Mosaic hops, with just a kiss of Simcoe behind them. Notes of juicy ripe pineapple, guava, lychee, papaya, and kumquat form the foundation, with secondary notes of melon, mango, orange, grapefruit, peachy stone fruit, white grape, and a herbal grassiness. There's a whisper of some deeper, musty dank notes from the Simcoe, but it's mostly buried beneath the fruit, juicy aroma of the other varietals.

Palate: The beer greets the palate with big juicy melon and papaya notes, presumably from the fruitier side of Simcoe. There's some ripe pineapple notes, accompanied by a hint of hop acidity which really reaffirms it. Hoppy flavours of lychee, mango, guava, and plenty of citrus. The malt is slightly sweet, and towards the finish, reveals a little wheat bread note. The fruitiness of the hops subsides, allowing some pithiness to surface, along with some rind notes. A mild bitterness accompanies this, and then some Simcoe-driven peppery notes emerge, pairing up with that wheat bread and citrus pith, in a slow fading finish.

Mouthfeel/Body: The ale is medium-bodied with a soft, round fullness to it - primarily the smooth malty sweetness. It isn't heavy, fluffy, or particularly full, but there's definitely some softness. It remains relatively crisp for the ABV, but this is right at the gate of double IPA territory. Effervescence is zippy and lively, and helps keep this fairly crisp. A bit of stickiness, but it dries out fairly well.

Overall: This is a well-made New England-style IPA, and personally, it reminds me of several Bissell Brothers offerings - in terms of flavour. Now, I'm not a huge fan of dry/late hopped Simcoe. I've said that a million times. More often than not, Simcoe ruins a NEIPA for me. It's not too heavy here, but it definitely lends that earthy, musty, overripe character. Looking past that, I see no flaws with this beer, and I can't dock it for a hop i don't like. A little less sweetness would benefit it, but as it stands, it's a great IPA, and many people will fall in love with it.

Reviewed by Pinz412 from Pennsylvania

4.38/5  rDev -1.1%
look: 4.25 | smell: 4.25 | taste: 4.5 | feel: 4.5 | overall: 4.25
Look - poured into a craftmaster glass, Duende is a bright and vibrant yellow orange haze with translucency setting in around the edges of the glass. The head was ample with large fluffy CO2 clouds that settled into a thin and persistent foam cap.
Smell - Citrusy hops with a touch of alcohol astringency.
Taste - The flavor builds from a quick hit of bitterness and then fades into a juicy finish. Candied hops, orange, and nectarine provide a sweet balance to the initial bite.
Feel - The fluffy head was foreshadowing for a soft pillowy texture.
Overall - High quality haze with a very nice juicy finish. Easy drinking and satisfying.

Reviewed by rajendra82 from Georgia

Reviewed by ThickNStout from Georgia

Pours a cloudy pale yellow with a tall cap of loose white froth. The head fades, leaving some light surface haze and a narrow, ghostly collar but no lacing.

After years of missing brewery-only releases I was pretty happy to find this one outside of the Creature Comforts facility. Duende doesn’t disappoint. It’s an enjoyable salad of Citra, Mosaic and Simcoe that I’d definitely pick up again.

Reviewed by Kgoldsbe from Colorado

Reviewed by jmc65267 from Georgia

Reviewed by RedhawkPoke from Oklahoma

S: The beer's aroma reminds me of a mango initially and predominantly. The overall smell of the beer is very reminiscent of tropical fruits. Along with mango notes there also seems to pineapple smell. Nice fruity notes all around.

T: The taste seems to follow the nose very closely. Getting a lot of the same sweet fruit flavors that I initially smelled. The beer also has a touch of dank pine taste that went unnoticed from the aroma. Overall, there seems to be a touch more going on with the actual taste than the nose in a positive way.

M: Mouthfeel on this is extremely full for the style. Not much in the way of a noticeable alcohol presence. The hop profile dominates both the nose and taste of this beer. Very smooth and easy drinker.

O: The taste of the beer is the high point here. There is just enough dank piney flavors at the back end to make the beer taste like straight juice. Mouthfeel is a nice plus here too; nice and full bodied beer. Nice example of the style and that slight earthy hint puts it over nicely.

A- A slightly hazy golden color with a two finger white head.

Reviewed by CanConPhilly from Pennsylvania

T - so many flavors here. At first it’s earthy, but that’s overtaken by a classic grapefruit taste, along with some light tropical fruit. Dankness follows, as does a bubble gum sweetness. Low bitterness. Moderate-low sweetness. Low booziness.

O - unusual, but I’m really digging the complex layers that this beer presents.

Reviewed by Beers-es from Virginia

3.87/5  rDev -12.6%
look: 3.75 | smell: 4.25 | taste: 3.75 | feel: 3.75 | overall: 3.75
Thanks to JBowenGeorgia for the chance to try this one.
Bright, turbid, peach tinged yellow in hue. Got a live one here. Frothy white head bursts up three fingers in height. Foam is spreading out, bigger bubbles are starting to give way, and now after about a minute, collapses to a patchy layer of foam. Some cloudy patches cling with little lacing.
Smell is bouncing all over. Some bright citrus notes begin, sweet leaning orange blossom moves toward grapefruit, now some sage notes, hints of onion, grass, and some peach notes sneak in to be quickly whisked away by juniper berry note.
Taste is more of a gentle stroll through peach, orange, cantaloupe, an ever so slight hint of lemon zest, and as it finishes it comes back around to a slightly piney to grassy note and finally a bit of pithy grapefruit. None of it overwhelms.
Kinda slick, a little fluffy. Carbonation is visibly present but adds only a bit to the feel.
Overall, I probably anticipated more than I got. A fine DIPA for sure. I guess I was hoping for a little more of the taste to follow the nose. I'll try the second can in a few days, see if that changes anything.